Jeremiah Bunch of Scandia, Kan., had a feeling that the 4 ½-year-old whitetail he first spotted in 2011 had the... 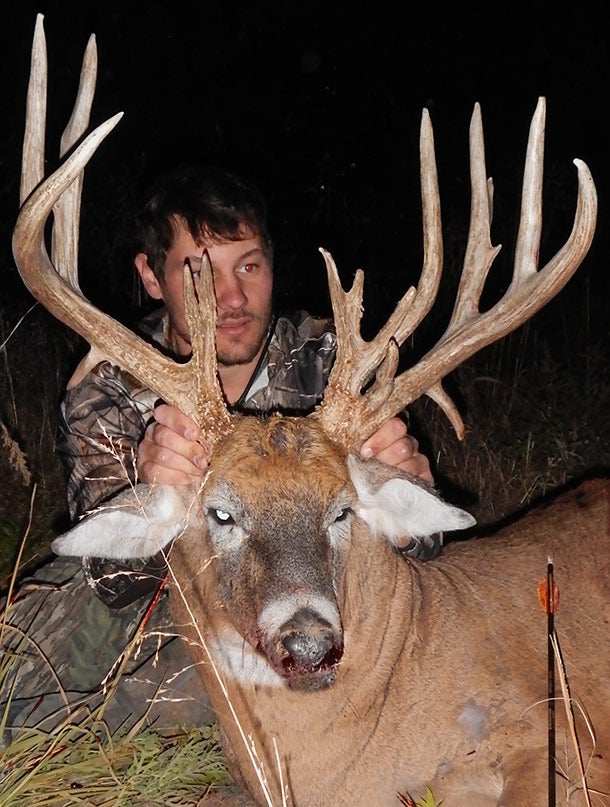 Jeremiah Bunch of Scandia, Kan., had a feeling that the 4 ½-year-old whitetail he first spotted in 2011 had the potential to be a truly special buck, so he let it walk–not once but a half-dozen times over the course of two deer seasons. This year his patience paid off when he killed the Sunflower State giant after the formerly symmetrical 4-by-4 sprouted a gnarly, 17-point non-typical rack that gross-scored a whopping 215 inches.

When Bunch first passed on the buck–which he called Big 8–he estimated it measured 140 inches. He found the deer’s right shed near his stand and later came into possession of its left antler after friends found it while turkey hunting. In 2012, the 180-class 8-pointer led a charmed life. “He was kind of stupid, running around on the road in broad daylight,” Bunch says. “My brother had him at 20 yards but shot over his back. He walked under my stand about five times, but I wanted my brother to have the opportunity if he wanted it. And I’d always wanted to let a buck grow to 6 ½, just to see what he’d do.”

After the season, Bunch again recovered a shed, finding the left antler in almost the exact same spot he’d found it the year before. The right shed remained unrecovered until this fall, when a neighbor gave Bunch the antler a couple of weeks after he shot the buck.

On Oct. 27, Bunch arrived at his stand around 2 p.m. “I had a good feeling about the night,” he says. “I bumped a couple of does when I got in, saw a couple of little bucks running around.” He’d started getting trail camera photos of Big 8 in June and July, and in mid-October the buck–now a much bigger non-typical–crossed the road in front of Bunch at night. “It was like he was teasing me, saying ‘I’m right here. Come and get me.'”

Now as Bunch waited for dusk to approach, a massive fight erupted in the timber behind him. “It was like nothing I’ve ever heard,” he says. “You could tell two monster bucks were locked up and just going at it.” A few minutes later, Bunch got a look at one of the battlers when a 170-class 8-pointer walked into the field. After that buck moved on, the 17-pointer stepped out behind a hay bale and Bunch reached for his bow.

“The adrenaline was pumping and my heart was pounding,” he recalls. “He stood there a while to make it hard on me. He finally gave me a broadside angle at 24 yards, and I drew back. He started walking away and I wasn’t sure I could stop him without scaring him, so I grunted real soft and thankfully he stopped.”

Unsure exactly where he’d hit the deer, Bunch sat in his stand for more than two hours, steadying his nerves and replaying the scene in his head. “With all the emotion of watching that deer for that many years and then it all happens so quickly, I had to sit a while and rethink everything. It seemed like an eternity.”

But a good blood trail made tracking short work, and Bunch soon had his trophy in hand. What he found was worth the wait.

“Seeing him laying there, how big he was and all the work of three years that went into it and having all my friends and family there when I found him, it was something,” Bunch says. “It felt like a huge accomplishment. There were a few tears. When you get a reward like that, a once-in-a-lifetime opportunity, there’s gonna be a few tears of joy.”