Blade Sharpening Tips from an Expert

A Knife Maker's Take on How to Really Sharpen a Blade 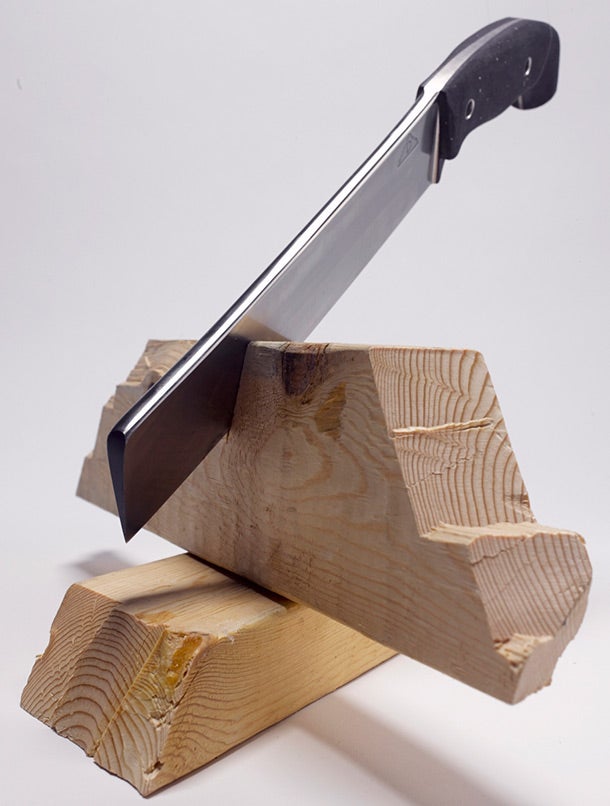 I hold the knife in my right hand, thumb on the blade spine. My left thumb guides the edge along a blade sharpening stone at as close to a 20-degree angle as possible. The screech of diamond dust biting steel is like a door creaking open in a slasher film. I haven’t broken such a nervous sweat since Mrs. Evans made me read a story about tarantulas to the entire third-grade class.

“Visualize the matrix,” Big D says. His eyes are a little glassy, looking toward a place I cannot yet see.

“Big D” is Donavon Phillips–Nissan factory mechanic, knife maker, and the current and three-time national BladeSports International cutting champion. We’re in his Mississippi shop as a cold rain patters on the tin roof. Phillips knows knives like LeBron James knows basketballs. He designs them, makes them, and competes with them in a little-known circuit that attracts some of the world’s finest bladesmiths. His slash through 22 water bottles is the official world record. “It’s unfortunate that cutting sports intimidate a lot of people,” Phillips says. “Most sportsmen grew up hearing their parents say, ‘Don’t play with knives.'” But Phillips grew up in the Mississippi Delta. “A machete, a knife, and some sticks–when I was 7 years old, those were all the toys I had.”

Now he peers over my shoulder, so close the overhead shop light casts his shadow over my work. I visualize the matrix, or try. Phillips described it to me earlier: A knife edge, he explained, is nothing more than a microscopic saw. The teeth are formed of carbides in the steel, which are locked in a matrix whose interstitial spaces are filled with other elements–vanadium, chromium, molybdenum–that support the carbides. “To sharpen a knife,” he told me, “you bring the opposing planes of the blade together, approaching at infinity. They never touch. But, of course, they do.” This is another metaphysical puzzler I’ve been asked to visualize.

I push the knife on another 5-inch pass across the stone, focused as a brain surgeon. My blade has a bit of belly, and Phillips tells me only a beginner sharpens the blade tip without adjusting angle for the curve. As I move the belly across the stone I lift my right elbow to increase the angle. It feels good.

Phillips cranes his neck and sends a stream of Copenhagen spittle into a 55-gallon trash can 4 feet away. It’s a rifle shot. Doesn’t arc 2 inches. Everything about this man speaks of precision. His shadow gives a little dip. “That ain’t bad,” he says. “Angle’s a little sharp, maybe.” I feel a trickle drip down my back.

Looking Sharp
This time of year, there’s a long list of low-stress, fun stuff I could be doing. Hose mud off decoys. Clean vent ribs with Q-tips. Snatch a few prespawn crappies. Instead, I’m dodging spit and sweating bullets in the Deep South, on a self-prescribed continuing-education course to improve my skills at freehand blade sharpening.

Like a lot of folks, I own a half dozen knife-sharpening gadgets and gizmos–sticks and stones and belts and one spring-loaded contraption that looks like it could guillotine a doll-size Marie Antoinette. But D. Boone didn’t need such crutches to sharpen a knife keen enough for bear. Big D, I’m hoping, can show me the way back home.

He started off a couple of hours ago, in his backyard, demonstrating the brute force and precision control showcased in BladeSports cutting competitions. Using a single 11-inch knife he made himself, Phillips chopped through a 2×4 (just a bit off the current world record of 1.21 seconds, I’d guess), slashed a fast-moving golf ball, split a drinking straw, and zipped through dangling 1-inch ropes. In the water-bottle cut, a single giant slash through a standing row of bottles, Phillips completely disappeared beneath a towering explosion of water, catapulted bottle parts, and flashing steel. And that was with just 16 bottles.

Now, in his shop, I flip my knife over to work the other side of the blade. Maintaining angle is the Holy Grail. I hold the blade at 90 degrees to the stone, tilt it to 45 degrees, then tilt it another halfway distance. I’m at 22 degrees, give or take, so I take a smidge more off. The shadow reappears.

“Now it’s all about repetition and muscle memory,” Phillips says. Before I even complete my first pass across the stone, he mutters, “That’s too shallow.”

But I don’t think so. I’m not a complete beginner here. When I turn the blade over and hold it close to the overhead shop light, however, a glaring streak of fresh metal glints along the shoulder of the bevel, a paper clip’s width up from the actual knife edge.

“You’re pulling it off the stone before it has a chance to work,” he says. “Watch what you’re doing.” It’s third grade, all over again.

I want to get this right. A sharp knife is the one piece of gear that binds all sportsmen together, and there was a time when a man was judged on the keenness of his blade. I get it. This knife is my baby. It is with me always, there for me always. It has gone through deer, hogs, turkeys, ducks, geese, swans, doves, fish, eels, turtles, frogs, ropes, Christmas wrapping, cattails for a hundred duck blinds, and at least one wedding cake.

It’s getting late. I’ve moved from a 600-mesh diamond stone to a 1,200-mesh stone and now work the blade over a leather bench strop loaded with 8,000-grit diamond paste. Phillips checks my progress every half dozen strokes or so. He points out tiny streaks in the thin lapidary paste, made by equally tiny burrs in the blade. Keep at it, he says, until those streaks are mostly gone. I’m getting there. Running the blade across my thumb, I can feel the fingerprint ridges hang up on the edge.

Pretty dang sharp, I think. I wonder if I can get it even sharper.

I push the strop to the side and pull the 1,200-mesh stone under the light. Infinity beckons on this cold Mississippi night. Beside me, Big D smiles.

Reveal the edge
To check the sharpness of your blade, turn the knife edge up under a strong light, and look at it carefully. A sharp edge will look like a thin black line. Any reflection spells trouble. Dull spots will shine. Minute nicks and burrs will show up as tiny glistening pricks of light. If you see them, head back to the stone.