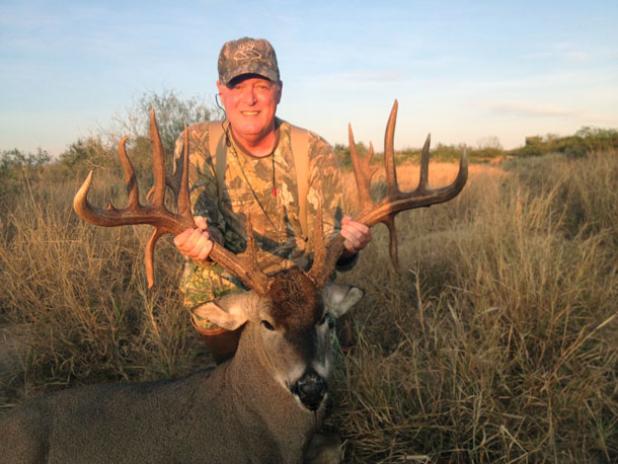 For 30 years, Hil Stroup of Austin, Texas, spent more time putting his four sons on big bucks than hunting his own trophy. So this season his family showed their appreciation by giving Stroup a Christmas present he’ll long remember: a hunt on a 20,000-acre south Texas ranch that yielded a giant double-drop tine 17-pointer. This buck topped anything ever shot by Stroup, and nearly cracked the Lone Star State’s top 25 for Boone and Crockett.

Stroup, a vice president of a real estate title company, has taken his sons hunting since the oldest, Rob, was five years old. Rob, now 35 and a former Marine Corps sharpshooter, spotted the buck the day before his father was to arrive at the Carrizo Springs ranch. He shot video of the massive nontypical from 500 yards and sent his dad a still photo. “What he didn’t do was show me the video, because he thought I’d be too excited and miss,” Stroup says. “And he was probably right.”

Figuring the deer would present a long-range shot, Rob told his father to leave the .270 at home and use his 7mm mag. But Stroup was halfway to Carrizo Springs when Rob called to say the 7mm was off at 600 yards.

He reassured his son it wouldn’t make any difference to him, but Rob already had formulated a plan to get his father a loaner rifle. And that’s how Stroup ended up taking possession of a high dollar, custom-made 300 Jarrett rifle on the side of the highway in Dilley, Texas; handed over by a man he’d never met.

“By then I’m thinking, ‘I’ve shot way more deer than you guys, why are you doing this to me?'” he says.

He understood why when he got his first look at the buck. After test-firing the Jarrett, he went with Daniel Boone, noted whitetail expert and Stroup’s longtime buddy who managed the ranch they were hunting, to the blind where Rob had seen the deer. He was watching the spot several hundred yards away where the deer was spotted when the giant stepped out at 70 yards.

“Now I’m too close,” Stroup says. “I can’t get the rifle out the window without him seeing me, and every time I move, the stand makes a noise.”

With the rifle zeroed at 200 yards, Stroup had to adjust his aim on the fly. The shot hit high, but dropped the big whitetail where it stood.

“The picture didn’t do the deer justice,” Stroup says. “When I saw it on the hoof there was an extreme case of buck fever.”

All of his boys have killed deer in the 150 to 170 range, so Stroup was determined to shoot nothing less than a 170-inch buck. He succeeded: The double-drop tine buck with a 29-inch spread measured 212 1/8 gross in two different big buck contests. Depending on how that score holds up after the drying period, it could become the No. 26 Texas nontypical whitetail, according to Boone and Crockett’s Trophy Watch website.

“When you take your kids, you enjoy their success more than you enjoy your own,” Stroup says. Now it’s his sons’ turn to be happy for him. “They’re thrilled for me. We just did not expect to see a deer that was gonna be the deer of a lifetime, especially one that looks as good as this.”