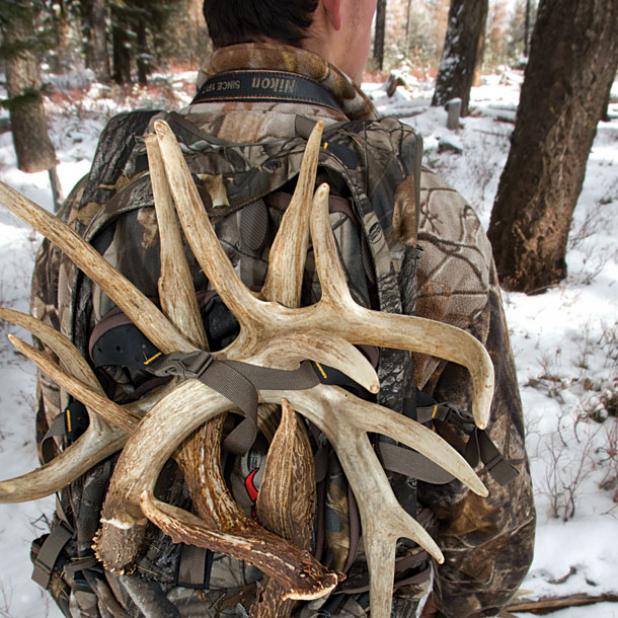 I know what you’re thinking: I couldn’t find a shed if it were full of gardening tools. Don’t worry. In the process of becoming an avowed shed head, I’ve learned several tricks that you won’t read in Shed Hunting for Dummies. Here are five that’ll make you a much better bone collector in no time.

1. Scout for Them
You scout hard before and during the deer season to wrap your hands around some heavy horns. You have to do the same now. Some bucks live in pretty much the same territory from fall through early spring, but many others migrate to wintering areas with good thermal cover, warm south-facing slopes, or a great food source. That’s where those deer are going to drop their horns–and nowhere else. So walk, drive, glass, and speed-scout for tracks and beds…whatever it takes to find these spots.

2. Get the Picture
Once you’ve figured out where some good bucks are spending the winter, don’t hesitate to set up scouting cameras near hot feeding areas, well-used trails, or even a mock scrape. If a big buck appears on film with his rack one day and without it the next, you know his sheds can’t be far away. Also, this gives you a better idea of when bucks are shedding their antlers in your region, which can save you a lot of tromping around for nothing.

3. Go with a Guru
He may blindfold you for the ride to his hotspot, even demand that any horn you find becomes his, but an expert (or anyone who’s had much better results than you) can show you more in a weekend than you’ll learn solo in a decade. Watch him closely. And ask that he call you over before he picks up any horn he finds (a great way to train your shed-spotting eye).

4. Be Mobile
To find sheds, you need to cover lots of ground. You’ll walk your winter gut off if you’re doing it right. Because bucks commonly drop their antlers in open areas, you can cover a lot of ground quickly by searching via ATV or snow machine (with the landowner’s permission). Also keep your eyes peeled while driving down the road–I spotted my best shed ever from my truck two years ago while taking the kids to school.

5. Go Fetch
Most sporting dogs can learn to seek and find sheds with some extra backyard training and field experience. My friend Ted spent a single spring and summer hiding horns for his Lab pup and praising the dog for fetching them. Now he has a shed-hunting fiend on his hands. Try it with your dog–it could put a lot of extra bone in your barn.