Photo by Windigo Images Much of the excitement of hunting coyotes comes from calling them close, but predators are wary... 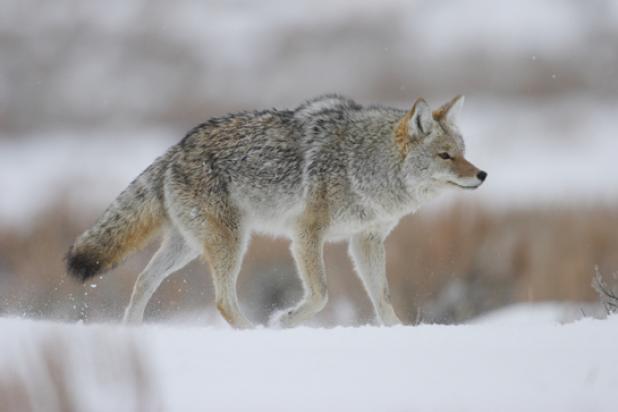 Much of the excitement of hunting coyotes comes from calling them close, but predators are wary by nature, especially when they’ve been called to, and shot at, before. On more than a few occasions I’ve watched a coyote come from a quarter-mile only to stop just out of what some people might call reasonable range. But with the right setup and some practice under your belt, you can push the limits of reasonable and put that long-distance dog down. Here’s where to start.

The .22-caliber centerfire cartridges – the .223 and .22-250 – are standard carry for most coyote hunters, but both can get a bit squirrely when playing the long-range game. Instead, opt for a caliber with a bit more oomph behind it, such as the .243. Stick with a polymer-tipped varmint bullet with a ballistic co-efficient topping .300. This will require a bullet weight of at least 70 grains. Remington’s 75-grain Accu-Tip V comes screeching out of the muzzle at 3,375 fps and retains enough energy past 400 yards to kill a coyote without punching a gaping hole through the pelt. Hornady’s venerable V-Max and the Federal V-Shok both offer similar ballistics.

When manufacturers tack the word “varmint” on to a rifle they are usually compelled to do one of two things: chop off the barrel to 22 inches and mill it full of flutes or they slap it into a wide, beavertail stock designed to be stable when shot from a bench. Neither is ideal for long-range coyote hunting. Of .243-caliber varmint guns on the market, few are offered in a 26-inch barrel – the Remington 700 SPS Varmint (pictured above) is one; Savage makes another. For a walk-and-stalk hunt in the wide-open West, I’d concede to a rifle with a moderately lighter 24-inch barrel. Either way, a mounted bipod, quality optics, and a good laser rangefinder are mandatory.

One of the best-looking coyote sets I’ve ever seen was near Medicine Bow, Wyo., where three of us perched just under a ridge that offered a wide view. For 30 minutes I imagined picking off creeping coyotes at 400, 500, and 600 yards or more. Unfortunately the Wyoming wind howled the whole time, leaving me with my imaginary miracle shots.

Point is, if a coyote can’t hear you calling, it doesn’t matter how good the spot is. On windy days, stay home or plan on calling multiple, short sets. However, on calm days, a coyote can hear a mouth-blown call more than a mile away, but it might take him 30 minutes are more to come that far, so stick out your sets as long as you can.

For maximum visibility stake out the highest point around, like that Wyoming ridge, but remember, if you can see a coyote from a quarter-mile, he can spot movement from just as far. Stay still and only move when an approaching dog is obscured from view. Consider an electronic caller with a user-friendly remote to further minimize movement.

One final point: Don’t think the long-distance game will get you out of playing the wind as coyotes live, and die, by their nose. It does give you an advantage, however. Get the breeze in your face, quartering slightly onto your right side (for right-handed shooters), so you’ll be in the perfect position to bust him as he tries to circle downwind.

A coyote’s vitals are the size of a grapefruit and to be successful you have to be able to hit that 5-inch circle. To do that consistently requires a rock-solid rest, accurate elevation and windage adjustments, and at least a bit of luck.

At these ranges, you’re essentially a sniper, so take a tip from their kit and get as close to the ground as you can, with your legs spread and feet laid out flat. Remember, you might have to lay there for 30 minutes or more, so remove any sticks, rocks or other obstructions before you start calling. Dress warm and get comfortable.

Think There, Not Here
Sure the wind may appear consistent where you’re sitting, but coulees, breaks, valleys, or even the smallest hillock can affect wind direction and cause a miss downrange. Before pulling the trigger, assess what the wind is doing at your potential target ranges and compensate accordingly.

Watch The Impact
The best shooting advice I’ve even gotten is to watch the animal go down in the scope. By concentrating on the impact, you’ll forget about flinching as your mind almost sub-consciously causes your finger to pull the trigger. Also, you should be able to deliver a follow-up shot with a more precise hold (if necessary) when you see where your first bullet hit.