How to Teach a Kid to Turkey Hunt

A couple of years ago, on a plane returning home from Texas, I sat next to a 7-year-old boy who... 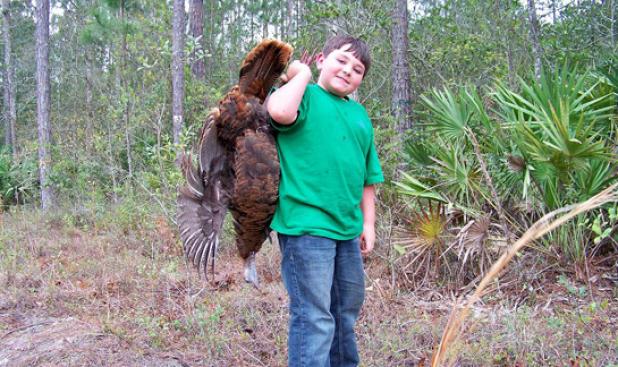 A couple of years ago, on a plane returning home from Texas, I sat next to a 7-year-old boy who had just added a Rio Grande to his Osceola, putting him halfway through his turkey Grand Slam. Whether a 7-year-old is mature enough to understand a Grand Slam–or even killing a turkey–is a question for another time. What’s undeniable is that many kids now get their introduction to hunting in the turkey woods.

My generation started with .410s and squirrels, but we didn’t have any choice: There weren’t any turkeys. Now they’re everywhere, and most states hold youth seasons before the regular season. Many adults are more interested in turkey hunting than in small game anyway, and that’s how their kids learn the sport.

There’s a lot of good to be said about spring turkey hunting for kids. The weather is usually warm. Blinds cover a lot of fidgeting and let you sit next to your young hunter and offer advice.

Turkey hunting differs from squirrel hunting, however, in a very important way: Miss a squirrel and you may find another 20 minutes later. Missing a turkey might ruin a young hunter’s season. I know one boy who missed two turkeys on the same day and never went hunting again.

If you’re taking a young hunter out this spring, you owe him or her the greatest chance for success when it’s time to shoot. Here’s how to achieve that:

The Gun: I suspect that more kids have killed turkeys with 20-gauge youth model Remington 870s and Mossberg 500 Bantams than with any other gun. Either makes a great choice. A standard Full choke is effective on birds 20 to 25 yards away, which is as far as you want a kid to shoot in order to ensure a clean kill. Add a turkey choke to give you an extra 10-yard cushion out to 35 in case you underestimate the range.

Optics You need some kind of sight that’s more precise than a single bead to help your shooter center the tight pattern. Red-dot sights are simpler and faster than iron sights and get my vote (see Reader Test, p. 70). The infinite eye relief means there’s no chance of a scope cut, and the shooter’s head can be anywhere on the stock as long as the dot is visible. Mossbergs come optics-ready. Remingtons need to see a gunsmith for a fairly inexpensive operation.

Shooting Sticks: When you sit in a chair in a pop-up blind, you can’t rest the gun on your knee as you can when sitting against a tree. Shooting sticks help a young hunter hold the gun steady on target as the bird comes into range.

Ammunition: A 20-gauge 3-inch magnum load of 11⁄4 ounces of No. 6 shot produces a dense pattern at 25 to 30 yards. For more range and energy, splurge on Federal’s Heavyweight Low Recoil load of tungsten-iron No. 7 shot. Stock up on 7⁄8-ounce field loads for target practice. Using hunting loads will ingrain a flinch.

Practice: At least two or three times before the season, have your hunter practice from a stool with the shooting sticks, and also take some shots while sitting on the ground. Shooting at a pop can on a stick is fun and closely replicates a turkey’s head-and-neck region. If the gun is putting eight to 10 holes in the can, it will kill a turkey at that range.

Calls: Practice calling along with shooting, so your hunter can participate in that aspect of the hunt. Push-button calls are simple to learn.

The Blind: Kids can nap, eat snacks, or play video games unseen in a pop-up blind. You can put one anywhere, even in the middle of a field. But sooner or later your young hunter needs to learn to sit still against the trunk of a tree. That’s a lesson squirrel hunting teaches so well that I fear it might be lost on the next generation, who, if we’re not careful, will grow up thinking hunting means nothing more than sitting in blinds and texting until it’s time to shoot.