A Run-and-Gun Turkey Hunt Through the Nebraska Sandhills

We were trapped, caught between the cedar-choked ravine we’d just clawed up and a huge sweep of grassy meadow a... 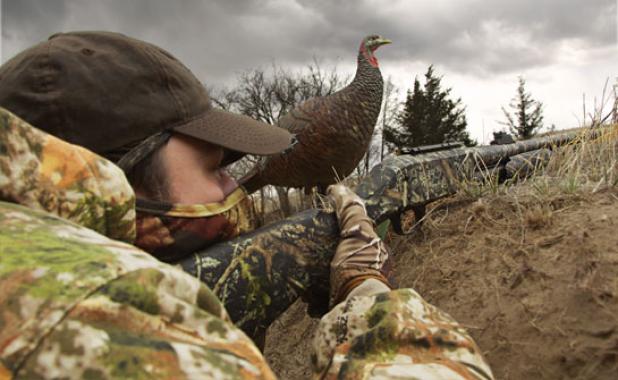 We were trapped, caught between the cedar-choked ravine we’d just clawed up and a huge sweep of grassy meadow a bobcat could barely slink through. No way this was going to work, I thought.

And just like that, Nathan Borowski was gone. He didn’t hesitate a second–just gripped his shotgun like a firehouse pole and dropped down the face of the ridge luge-style, feet first and streamlined. As he slid under a scary latticework of cedar limbs, my mouth hung open. Then his buddy, Wes Remmer, followed suit and hurtled down the slope from zero to man-that-has-to-hurt in two seconds flat. A contrail of pine needles and Nebraska dust marked their free fall–that and the sound of cracking limbs.

Their approach was not exactly what I had in mind, but the die was cast. A squadron of Merriam’s was headed up the ridge, and these woods were too thick to cross. We couldn’t move forward, and retreat wasn’t an option. The only way up was back down–down and around a thickly wooded ridge spur, and then another lung-busting climb up the ridge. We had been after these birds for an hour already, and now the sun was dropping low. It was this or nothing. I crossed my arms over my chest, eyed a clear path under the cedars, and bombed through the woods, praying for safety.
The turkeys were on the run.

Whoever made it to the top of the ridge first would win.

Spring Awakening
We all have wild turkey fever right now. Spring bursts from the winter-dead landscape in a kaleidoscope of wildflower blossoms, gaudy warblers, and trees clad in tender leaves the color of peas. After weeks of brown mud and gray slush, watching a rising sun light up green woods feels like a shot of good whiskey to the soul. It’s time to dial the alarm clock back to its deer-season setting and head for that classic and calendar-worthy tableau: Hardwoods and swamp bottoms. A hunter hunkered at the base of an oak, back aching from a 45-minute sit. A big tom 10 feet away, puffed up like a toad.

All of which Nathan, Wes, and I had thrown out the window. In all of my gobbler dreams, I’d never conjured up the crazy turkey country of central Nebraska’s Custer County. Here, the Great Plains mishmashed with the sprawling Sandhills in a patchwork of prairie meadows, deep gullies, and ­cedar-​lined canyons. Escarpments rose so steeply there were times when pitons and a climbing harness would have come in handy. There were Eastern turkeys around, but the bulk of the birds were Merriam’s, which course over the miles of broken landscape like panzer divisions and often move in large flocks. One morning I counted 82 birds roosting in a single cottonwood.

Yesterday I tagged out on a whopping-big Merriam’s tom I shot while lying facedown in the bare dirt, my guide from Hidden Valley Outfitters calling from out of sight 50 yards away. But that was only after a ­morning-​long Merriam’s gobbler march–spot and stalk, run and gun, but mostly run and run and run some more.

Nathan, Wes, and I spotted these birds when they were halfway up a three-quarter-mile open slope bordered by a cedar-choked canyon. It was a last-day, last-ditch shot at pinning down a Merriam’s for Nathan, and we’d piled out of the UTV ­commando-​style, scaling the lower bluff to cut the birds off before they could top the ridge and vanish into the Sandhills ether. For two hours we dogged the flock like hungry wolves, belly-​­crawling out of the cedars to glass for the birds, crashing through the underbrush each time we realized we’d never quite caught up. It was unlike any turkey hunting I’d ever done, heard of, or read about.

We came close, early on, when we shimmied from the cedars to find birds down below. I rolled to one side, pulled a few yelps from a slate call, and glanced uphill to make sure Nathan was ready. Behind him, the head and neck of a gobbler emerged–as if a giant lollipop were sticking out of Nathan’s skull. The gobbler clucked in alarm and bolted, taking with him the dozen other turkeys feeding in the tall grass less than 20 yards away.

Now we were running out of daylight. Three times we’d sprinted to cut the birds off, and three times the birds had slipped out of our noose. Our last chance was an all-out assault on the ridgetop. A howling wind covered our frantic dash. We crawled out of the uppermost cedars just in time to see seven crimson heads bob up and over the crest of the ridge. Another two dozen birds had summited already and were moving away, out of range. The rest of the flock had vanished. We were out of cover and out of time.

The sun had slipped below the horizon by the time we made it to the canyon floor, back to where we’d started. I could see a few birds still, far up the ridge, little smudges of black moving like beetles. Turkeys like no turkeys I’d ever known, but for one common trait: Like every turkey that’s ever given me the slip, these were destined to strut through my winter dreams and awaken me next spring, another year older. And wiser to their ways.