Photo by Dusan Smetana A few years ago a friend and I gave a compressed instruction course to two women... 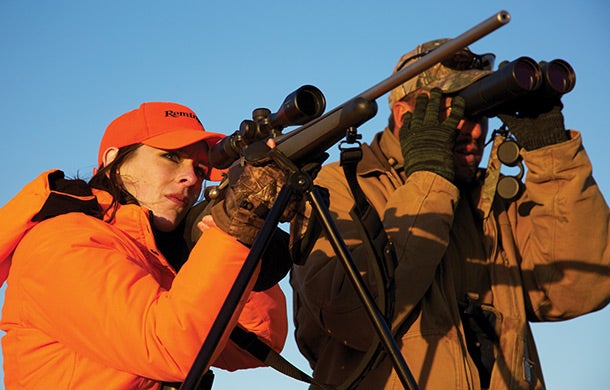 A few years ago a friend and I gave a compressed instruction course to two women who were about to go on a mule deer hunt and had never fired a rifle before. We conducted the class separately, and after an hour or so my friend walked over to where I was and said, “I can’t show her anything. She hits the 10-ring every time she pulls the trigger.”

Some women, like some men, do not learn to shoot easily, and do not become good shots. But from what I’ve seen, many women learn faster than men and do at least as well—or better. Women concentrate better than men; they listen better; they’re more flexible, so they get into shooting positions more easily. And since they’re coming into the shooting sports faster than any other group, it behooves us to know how to get them started should we have the chance.

Recoil
If you start a woman shooting with anything but a .22 rimfire, you have taconite ore between your ears instead of brains. Nobody likes recoil, and women have sense enough to admit it. When you move to a big-game rifle, a cartridge such as a 7mm/08, a .260 Remington, or the old 6.5×55 or 7×57 Mauser will drop anything—and with minimum kick and muzzle blast. The wife of a friend of mine took a 7mm/08 to Africa last year and killed 12 critters with 12 shots.

Gun Fit
The average factory rifle is stocked for a man who is about 5 feet 9 inches. The average woman is considerably shorter and has a longer neck. This means that the standard length of pull of 13½ to 13¾ inches is going to be much too long. In addition, the comb will be too low for her to get any support from it.

To check for gun fit, have the shooter wear the clothes she’ll have on when she hunts. Ask her to close her eyes and mount the rifle; if her eye is not level with the center of the ocular lens, and she does not have around 3½ inches of eye relief, there is work to do.

If moving the scope rearward in the rings doesn’t achieve proper eye relief, take the rifle to a gunsmith who knows how to fit guns and have the stock shortened. (While you’re at it, have a good recoil pad installed.) This leaves the problem of comb height. There are several accessory combs that lace or slide on, but I don’t like any of them because they don’t stay put.

Instead, you can build up the comb with thicknesses of moleskin or by duct-taping rectangles of 1⁄2-inch closed-cell foam to the stock until you get the height you need. Both solutions look like hell but work great.

Eye Dominance
I’ve seen a surprising number of women shooters who are right-handed and left-eyed, or vice versa. This causes problems, so check for it. Have the woman stand 20 feet or so from a bull’s-eye target, form a circle with the thumbs and index fingers of both hands and, in one motion, bring the circle up and center the bull in it. Now, have her open and shut one eye at a time. If the bull appears to move when she shuts an eye, that is the dominant eye.

Chasing Perfection
Keep in mind that women, unlike men, tend to want everything perfect. That can make them slow to pull the trigger. It’s not a problem at the range, but it’s a big deal in the field. Work on getting off an accurate shot within three seconds of acquiring the target.

Savage’s new Model 11/111 Lady Hunter ($840; savagearms.com) is miles ahead of anything else I’ve seen that’s designed for female hunters. This good-looking little bolt action comes in a choice of eight sane calibers from .22/250 to .30/06 and has ideal stock dimensions, weight, and balance.