Photo by Johnny Miller; Food Styling by Roscoe Betsill Mole sauce (pronounced MO-lay) may be the oldest and noblest preparation... 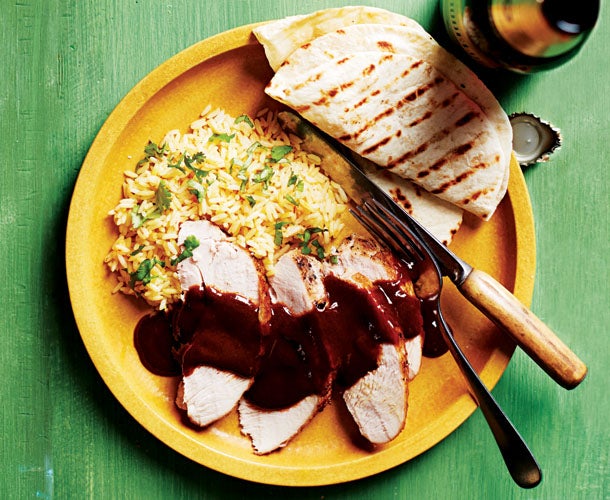 Mole sauce (pronounced MO-lay) may be the oldest and noblest preparation for wild turkey that exists. In southern Mexico, where the sauce originated, mole is often a complex creation with dozens of ingredients cooked over the course of several days. This one, based on a version the Chicago chef Rick Bayless is fond of making to accompany quail, is vastly less demanding but no less exhilarating. Just make sure, as with any wild turkey preparation, to avoid overcooking the breast. A mole can work wonders but not miracles.

Directions:
1. Set a skillet over medium heat. Rip the ancho chiles into pieces that will lie flat in the pan. Toast the pieces on both sides until they begin to crackle, but flip or remove them once they start to smoke. Transfer the toasted chile to a bowl filled with hot water and let soak for 30 minutes.

2. In the meantime, heat 1 Tbsp. of the lard or oil in a large pot or Dutch oven over medium heat. Add the onion and garlic and cook, stirring occasionally, until the onion is a deep golden brown, about 8 minutes. Remove from the heat.

3. Arrange the tomato halves cut side up on a sheet pan, and place under a broiler set to high (or adjust the height on a broiler pan). Roast the tomatoes until blackened and bubbling, about 5 minutes, then flip them and roast the other side to the same effect. Allow them to cool, then peel off as much skin as you can (some charred bits are fine).

4. Scrape the tomatoes and any juices into a blender jar, along with the cooled onion and garlic. Drain the ancho chiles, discarding the water, and add them as well. Add the nuts, bread, chipotle, cinnamon, and about 2 cups of the chicken stock and blend until very smooth. (You may need to stop the blender at times to scrape down the sides. Add more stock as needed to yield a smooth, pourable puree.) Press the puree through a sieve into a bowl.

5. Over a medium-high burner, heat the remaining 1 Tbsp. lard or oil in the same pot or Dutch oven, rinsed and wiped clean, that you used for the onion. When it begins to smoke, add the puree and stir constantly for 5 to 7 minutes, or until the mixture has darkened and thickened considerably. Add the remaining chicken stock, wine, vinegar, and bay leaves, and reduce the heat to low. Simmer, partially covered, for about an hour, stirring occasionally and adding more stock or water as needed to maintain a saucy consistency. Add salt and pepper along with the tablespoon of sugar, to taste, and keep the sauce covered while you cook the turkey.

6. Allow the turkey to sit out, covered, at room temperature 30 minutes before cooking. Light a medium fire on one side of a charcoal grill, leaving the other side open, or, for a gas grill, set the burners to medium on one side. Rub the turkey breasts with the olive oil, and generously salt and pepper them. Place the turkey on the grill, directly over the heat, and cook each side for about 5 minutes, to brown it. Move the breast to the side without coals and cover the grill. It is done when a meat thermometer placed in its thickest part reads 150 degrees; the size of the breast and temperature of the grill will determine cooking time. Wrap the breast in foil and let it rest for about 10 minutes. Gently reheat the mole as needed.

7. To serve, slice the meat across the grain. Ladle the mole onto plates and nestle the turkey into the sauce, garnishing with the chopped cilantro. (There will be ample sauce leftover for freezing.) Serves 4

And here is the pefect cocktail to complement this dish. Visit fieldandstream.com/molemixer for the recipe.