Turkey Hunting: Sit or Sneak on a Flocked-Up Tom

Flocked-up birds? Toms not leaving hens? Here are two ways to fill your tag anyway. As I hunted Nebraska’s Pine... 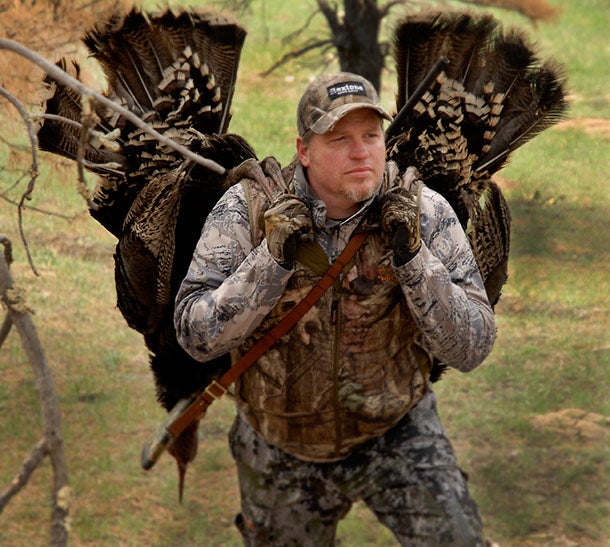 As I hunted Nebraska’s Pine Ridge with Allen Williams of Dos Plumas Hunting Ranch last year, bitter weather lingered into early spring and kept the turkeys on a mostly winter pattern. Huge flocks of hens hung tightly together. Although the shadowing toms would gobble and strut, there was no luring them away from all those girls–no matter how sweet our turkey calling. We certainly tried, but eventually, we switched to a pair of less conventional tactics to get shotgun-close to those cold-weather toms.

Sit, Shut Up, and Watch
Williams knows his ground and his turkeys–which knobs they like to roost on, which cropfields and grassy openings they gather and feed in, and which draws and ridges and wrinkles and roads they travel through. So for him–and for you if you’ve done enough scouting–one of the surest ways to fill a tag in unseasonably cold weather is to set up a bushwhack. That is, get in an oft-used travel corridor and simply wait for a tom to shuffle into gun range.

“If the birds are talking, I’ll call to them,” says Williams. “But more often than not, they come through quietly and I don’t make a peep. I’ve noticed that in these conditions, hens will often move away from the sound of a hen call, pulling the gobblers with them.”

Although things didn’t quite come together with this tactic on our trip, Williams did get another client within gun range of a couple of closemouthed birds, and he has taken many early-season gobblers by ambushing them along well-used travel corridors.

Caw, Crouch, and Crawl
If, on the other hand, you are hunting unfamiliar ground, or if you just don’t like to sit still, as I don’t, there’s another way to punch your tag. While flocked-up hens are still icy cold, the toms are generally up to temp, eager to gobble and strut and get spring rolling in the early season. They may not leave their hens to come to you, but they’ll usually answer a call. That means you can keep them talking enough to put on a sneak.

Once the birds have flown down and flocked up, hit them hard with a loud locator call (I like a crow call; see sidebar) to pinpoint the toms. Hit that same call just often enough to gauge their speed and direction of travel so you can circle around in front of them. With luck, they’ll walk right to you. More likely, you’ll have to crouch and creep and crawl to close those last few yards–which is what I did to take the two toms pictured above.

If your ground has knobs and spurs and ditches and draws, like the rolling Nebraska riverbottoms where I hunted, this is a particularly deadly tactic.

For safety’s sake, use it only on private land where you know there aren’t any other hunters. Expect to blow a bunch of stalks–even in the best conditions this isn’t easy–but as long as you don’t spook the birds, you can stay on them until you pull the trigger.