Photo illustration by Dan Saelinger One thing sorrier looking than a sopping-wet jake in the gray light of a rainy... 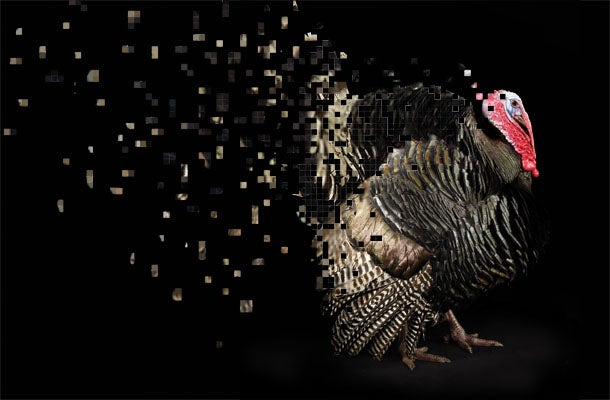 One thing sorrier looking than a sopping-wet jake in the gray light of a rainy dawn is the sight of six sopping-wet jakes, skulking around a hen decoy like vultures around roadkill. We had dodged the forecasted 2-inch hail but caught the rest of a freak Texas spring storm–sheets of rain, 30-mph winds, and a raw temperature of 32 degrees. Hunkered down in a ground blind of mesquite and cedar, I shivered. The raindrops on the green boughs glistened like Christmas lights. The craziest part, though, was the thunder, which rolled over the north-central plains.

Gobblers answered every crack. Within an hour, 23 jakes and hens passed by the blind at 20 yards or less, but not a single mature bird joined the parade. Instead, the big toms stayed put, hung up in a ribbon of cottonwoods and live oaks, answering thunder with thunder.

Out front, the young males shook rain off their feathers like Labrador retrievers. More thunder followed and more gobblers responded, their calls now fading as the toms turned their tails toward us and struck out in the opposite direction from the other turkeys. Turkey hunters everywhere would be able to feel my pain. There’s just no way to get inside the head of a wild tom. Except: Decoding the gobbler’s brain was the reason I’d come here.

Where did they go? Did I bust the roost? Botch the call? What makes a wild turkey do what a wild turkey does? These are the questions that keep turkey hunters up at night–questions that biologists are pursuing with an innovative new push in wild turkey research. Using high-tech devices, such as tiny backpack GPS units, satellite imagery, and computers running algorithms that ingest enormous amounts of data, university scientists and agency biologists are beginning to get a look inside a gobbler’s brain. They’re teasing apart the factors that drive a turkey’s selection of brooding, nesting, and roosting habitat, and they’re drilling down on the specifics of how wild turkeys react to humans and how hunting pressure affects turkey movement and behavior.

This new wave of science, says Bret Collier, a professor at Texas A&M University and a serious hunter, “is filling in some of the most significant gaps in our knowledge about wild turkeys. We’re watching turkeys do stuff we never thought turkeys would do.”

The work is taking place across wild turkey country in the South–from South Carolina to Louisiana to the vast Cross Timbers region of north Texas, where I showed up for three days last April. Collier oversees much of the groundbreaking GPS research here at the private MT7 Ranch, 13,000 acres of rangelands about 140 miles west of Dallas. Owned by Dallas businessman and philanthropist Mike Terry, MT7 Ranch functions as a family retreat, hunting camp, and unofficial research station for university scientists, resource-agency personnel, and biologists with groups such as the National Wild Turkey Federation.

The ranch is thick with Rio Grande turkeys. Over the last few seasons on MT7, Collier and other researchers have outfitted scores of birds with small GPS units that strap on like a backpack. In the past, traditional VHF radio telemetry required field staff to patrol the ranch, acquiring signals with a cumbersome antenna and receiver that gave only a rough approximation of the turkeys’ locations. Once these GPS units are placed, though, the birds are released and records of their whereabouts can be taken as frequently as the researcher desires. There is one downside: In order to pull data, the birds must be either recaptured or killed. But the next generation of GPS units is becoming available that will allow data downloads wirelessly from as far as 1,000 meters away.

“Until recently, turkey research had stagnated,” said Mike Chamberlain, a wildlife professor at the University of Georgia and another pioneer in this field of GPS-based research. “We now have the chance to reinvent the wheel and learn things we never could learn before.”

For turkey hunters, all of this brings good and bad news: The good? More knowledge is always better. The bad? “One thing we’re learning,” Collier said, “is that the birds are smarter than we are.”

One afternoon I hit the ranch’s back roads with Mason Conley, Collier’s graduate student on the MT7 Ranch project. Conley drove a research truck sporting a giant telemetry antenna protruding through the roof. We cruised through steppelike grasslands that sprawled in a mosaic of skunkbush and scattered mesquite, mesas thick with live oak, and creekbottoms timbered with cedar, cottonwood, elm, and the pencil cactus Texans call tasajillo.

Love was in the air. In an hour we spotted plenty of hens and jakes and a half dozen strutting toms, fans ruffling in the wind like full-blown Plains Indian headdresses. At any given time, Conley tracked between 30 and 40 birds, a couple outfitted with newer wireless GPS units, others wearing VHF transmitters. That data was then fed into algorithms written to quantify specific questions: How much time do hens spend looking for nest sites? What specific habitats do they choose? How often do hens leave an active nest? How long are they gone? How many encounters do wild turkeys have to have with hunters before they abandon an area? If you bump a bird from a roost, does it return? If not, how far does it go?

The answers are just now starting to take shape, but already there’s enough data to make Conley reconsider his own hunting methods. Growing up in Mississippi, he chased turkeys with a Remington 870 and took a conservative approach. Tracking Rio Grandes with GPS equipment, he tells me, has changed how he thinks about turkey hunting. He’s watched dozens of birds sit tight for day after day. “I’m definitely going to be more proactive,” he said. “My dad and I talked about this, and last year he worked out, got in shape, was much more aggressive, and killed two birds in Missouri. He’s convinced he needs to move in on them, and it paid off.”

Of course, if there’s one thing turkey hunters and turkey biologists can agree on, it’s that every wild tom has a mind of its own. “There is a lot of variability in how turkeys respond to humans,” said John Gross, a graduate student working under Chamberlain at the University of Georgia. In the last two years, Gross has tracked 18 birds outfitted with GPS units, logging 39,766 separate locations. Broadly speaking, the data shows that when pressured, some turkeys hunker down, while others fly the coop to set up shop elsewhere. The challenge is that no matter which strategy the birds employ, their behavior changes once turkey season opens. “One thing that is very consistent is how quickly they learn that there are hunters in the woods,” Gross said. “Don’t fool yourself: The turkeys know you are there, and they know you are not a turkey.”

Several birds have illustrated that flight-or-stay-out-of-sight choice, but Chamberlain had told me about one turkey–Male 240–in particular. “That bird showed us just how far a turkey will move to get out of the way of hunters,” he recalled. Outfitted with a GPS unit, Male 240 roamed the dense forests of Sherburne Wildlife Management Area, deep in southern Louisiana’s Atchafalaya Basin. On the opening morning of a youth hunt, as a few permit holders entered the woods, Male 240 hit the road and traveled 1,000 meters north of the areas where he’d been ranging. Forty-eight hours later, the gobbler shifted another 800 meters north. He then stayed put, at least for the time being. When the general hunting season opened up two days later, as many as 50 permitted hunters poured into the swamp woods. Male 240 didn’t stick around. This time he put an additional 2,000 meters between him and the hunters. All told, within a week, that gobbler shifted his base of operations almost 21⁄2 miles away from the area of disturbance.

Another GPS turkey, an Eastern in Louisiana’s Tunica Hills Wildlife Management Area, proved just how sneaky a bird can be when he doesn’t want to be found. Whereas many birds shift to put at least some distance between themselves and encroaching humans, Male 780 put down roots near a food plot at the intersection of two of the busiest trails into the public hunt area, and mostly refused to budge. “We have gobs of data on that bird,” Gross said. For that one gobbler, 46 percent of 377 locations recorded during the hunting season were taken when a hunter was within 100 meters. “Hunters were on top of him all season long,” Gross said. “He was surrounded by hunters for days, and no one ever killed him. We all know there’s a lot of variability in turkey behavior but, man, some turkeys are just a whole lot harder to kill than others.”

Like another bird that bamboozled me in Texas. Late one morning, Josh Fleming and I sat against a double-trunked mesquite that leaned forward just enough so that no position was comfortable for more than six seconds. We sat there for 40 minutes, hardly moving, pinned down by an obstinate gobbler that refused to leave a little patch of broomweed maybe 80 yards away. After 53 minutes, the gobbler had closed the distance twice to 60 yards, each time raising my blood pressure, before retreating back to his little happy place. “They don’t get big by being dumb,” Fleming whispered. In one hour, that turkey gobbled at least 80 times, all within 100 yards of my unhappy place, all while responding to our calls, before he shuffled off into the cedars. We’d had a perfect setup. We were crazy-close to a gobbler so hot and vocal he must have had to gargle saltwater after our encounter. But he illustrated one of the nonscientific findings of gobbler hunters everywhere: There are times you can’t even buy a turkey.

Going Out with a Bang

And then there are times when what goes through a turkey’s mind is as plain as day.

On my last morning at MT7 Ranch, Clint Faas, a ranch biologist, and I struck out for a run-and-gun hunt. Our plan was to cover ground–hit likely spots with a quick calling sequence and, if nothing happened, jump in the truck and strike out for another promising area.

Sunlight was barely washing over the broomgrass and tasajillo cacti as we made our way through scattered post oaks. Faas pulled up short and squeaked a weak yelp from his slate call. And that was all it took.

Faas looked at me: “You heard that, right?” I didn’t have time to even squeeze in a nod. The turkey gobbled again, and already he’d cut the distance in half. Faas and I scattered like quail and flopped to the ground. I crawled to a live oak as Faas vanished into the grass behind me. The tom gobbled again, and again. This bird was on a dead run. I scooched my knees up and settled the shotgun just as I spotted one gobbler and then another, high–stepping in at 11 o’clock. They were 25 yards out. Faas never made another peep. At 20 yards one bird stopped, cocked his head, and fixed me with a stare. I didn’t need a computer program to hear what he was thinking: That doesn’t look right—

The data is coming in fast, shedding light on all the variables that make a turkey tick. But when there’s sex on the brain, deep in the turkey woods, it’s as simple as it gets. It took less than three minutes to solve this equation. Daylight, hen yelp, gobble-gobble, get down, bang.