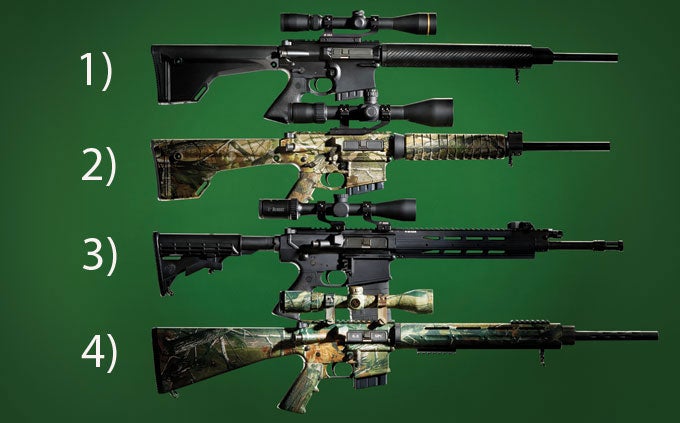 About 150 years ago, a new 15-round Henry repeater brought shock and awe to Civil War battlefields. Today, we refer to that gun’s progeny as classic deer rifles. But before hunters would fully embrace the lever gun—first chambered for anemic rimfire rounds—makers had to up the knockdown power. And so it is with today’s ARs.

DPMS has an entire line of ARs dedicated to hunters and chambered in a host of serious game-getting rounds, including the .243 Win., .260 Rem., 6.5 Creedmore, .308 Win., .338 Federal, and more. At 73⁄4 pounds, my test gun, the GII Hunter, is light and handy, delivering aimed .308 bullets from a 20-inch barrel with all the speed anyone needs for hunting. Its cylindrical carbon-fiber forearm is superior to aluminum in the woods because it rests quietly on anything. The two-stage trigger breaks at 5.7 pounds and is crisp—the best of the lot. All reputable ARs are adequately reliable for hunting, but the GII’s twin ejectors and enlarged ejection port make it nearly bombproof. The supremely rigid Magpul MOE buttstock provides a comfortable, consistent cheek weld, enhancing long-range accuracy while mitigating recoil. My gun averaged 1.3-inch three-shot groups. $1,699; dpmsinc.com

The company once known for Dirty Harry and political capitulations has become one of the hottest AR makers. Now in Realtree camo, the S&W .308 Win. (7.62×51) M&P10 is patterned after Eugene Stoner’s original 1955 AR-10 design, which is the predecessor of the comparatively wimpy .223 AR-15 or M16. This rifle cycles rounds via a direct gas impingement system that functions like a Remington 1100 shotgun, cutting recoil. S&W ARs are uniquely ambidextrous, with the safety and magazine and bolt release buttons on both sides of the receiver. Right-handers may view the redundant controls as clutter; lefties will love it. The A2 hand guard is plain. As with the DPMS, the Magpul MOE buttstock helps long-range accuracy. Despite a mushy trigger that breaks at 6.3 pounds, this gun produced my best three-shot group of the bunch, a .78-incher with Winchester 168-grain match ammunition. So go ahead hogs, make my breakfast. $1,729; smith-wesson.com

Clearly marketed to Sgt. Tackleberry types, the SR-762 can take on deer just fine. The rifle cycles via a gas-piston system, which is cleaner and therefore potentially more reliable than a standard gas system. It’s also more expensive. At 8.6 pounds, the SR has a 16-inch hammer-forged barrel, a machined-aluminum rail, and copious attachment points. Keep it clean for deer; add night vision, flashlights, lasers, and whatever else you may need for night hogs. For hunters, the collapsible stock doesn’t do much, though it fits in the truck smartly, and the trigger’s 9.1-pound battle-rifle pull is quite heavy. But the gun comes with three Magpul 20-round magazines, flip-up iron sights, and a quality nylon case. While this Ruger may frighten Sen. Feinstein, it’s a reliable .308 that can take nearly any game animal or three-gun contest in the free world. $2,195; ruger.com

Yankee Hill Machine, which turns out customlike guns with unique machining features, now offers several Hunt Ready Camo models packaged for the field, each including a Realtree finish, a zeroed Bushnell Banner 3–9x40mm scope, a sling, a five-round mag, and a plastic case. With immaculately forged upper and lower receivers, my test gun had a 20-inch barrel; a tubular, machined-aluminum hand guard; and a rigid A2 buttstock. The unique diamond barrel-fluting pattern hastens barrel cooling and looks cool. The 6.8 SPC provides a 400 ft.-lb. energy advantage over the .223 Rem. while sharing the same short action length. With premium 115-grain bullets, it’s more than adequate for bucks and boars. Thanks to an immaculate, if heavy, 6.9-pound trigger, my test rifle delivered first-rate accuracy with a range of ammo, averaging 1.1 MOA. At just over $1,500, the HRC 200 may be the best deal in hunting ARs. $1,563; yhm.net