In eight years of Budget Bow Shootouts, not once have I had trouble picking a clear-cut winner. But this year’s... 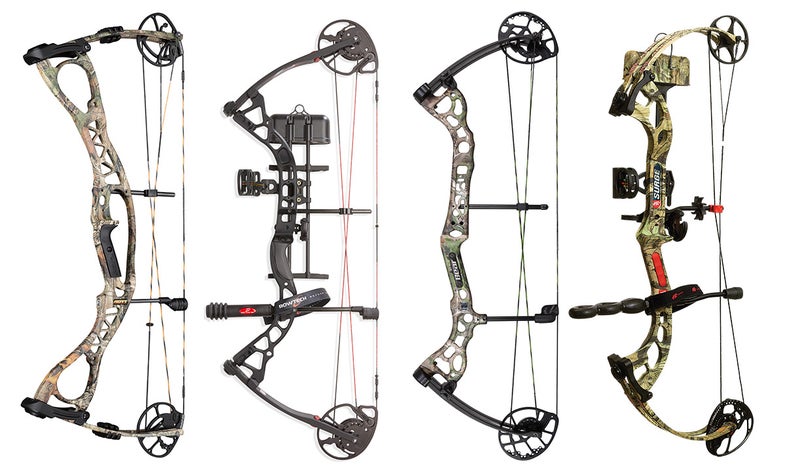 In eight years of Budget Bow Shootouts, not once have I had trouble picking a clear-cut winner. But this year’s crop of new sub-$500 compounds is so generally good—each one with standout qualities—that it’s a real toss-up. But, hey, this is a shootout. One bow has to come out on top. So I’ll pick a best- of-the-test bow, but in a race this tight, the real winner is you.

THE SKINNY The Crux is a prime example of why I’ve been a big fan of Bear’s recent midpriced offerings: It may not be much to look at, but it’s a heck of a hunting bow for the money. My test model was slightly louder than the others, and the draw cycle a little rough with a comparatively shallow valley, but the Crux did well in the speed test, took second in accuracy (1.65-inch average groups at 30 yards), and proved solidly dead in the hand.

BOTTOM LINE A great deal. If I were to change my mind tomorrow, the Crux would win ($450; $550 with accessories; beararcheryproducts.com).

THE SKINNY Like many recent grow-with-you beginner bows, the Fuel offers outstanding adjustability (14- to 70-pound draw weight and 18- to 30-inch length, no modules or press needed). But whereas many such compounds are too short, too light, and relatively slow, the Fuel shoots like a grown-up model. Though it is light and feels a tad cheap, it is quiet, draws smoothly, delivers all the accuracy you need for most hunting (my average group at 30 was 2.22 inches), and is very fast. It won the speed test.

BOTTOM LINE The best beginner’s bow here—one that could serve well for several, perhaps many, seasons ($499 with accessory package; bowtecharchery.com).

THE SKINNY The Charger nearly stormed to a win here last year and has been improved for 2014, with new limb pockets and wider split-limb spacing for more stability. It has a look and feel far above its price. While the draw cycle isn’t quite butter, and the back wall has a bit of sponginess, it was the second-fastest bow and proved quite accurate, averaging 1.75-inch groups. What really won me over, though, was its excellent balance and handling. If you don’t like the rubber grip, it’s easy to remove.

BOTTOM LINE A solidly built, all-around excellent bow for the money, this is my winner. The specs are just about perfect for use in the whitetail woods ($500; hoyt.com).

THE SKINNY PSE won last year’s shootout with the Drive ($500), which you can still buy; all else being equal, I prefer it to the Surge. But for a paltry $400, this is a superb deal. Fit and finish aren’t much; the bow is a tad clunky and comparatively slow. But the draw cycle is fairly smooth; there’s little vibration; and oh man, does it shoot, delivering best-of-the-test 1.37-inch average groups at 30.

BOTTOM LINE The best bargain here—maybe the best in archery this year. If you are on a tight budget and prize value and accuracy over looks and speed, you can’t go wrong with the Surge ($400; $500 with accessory package; pse-archery.com).