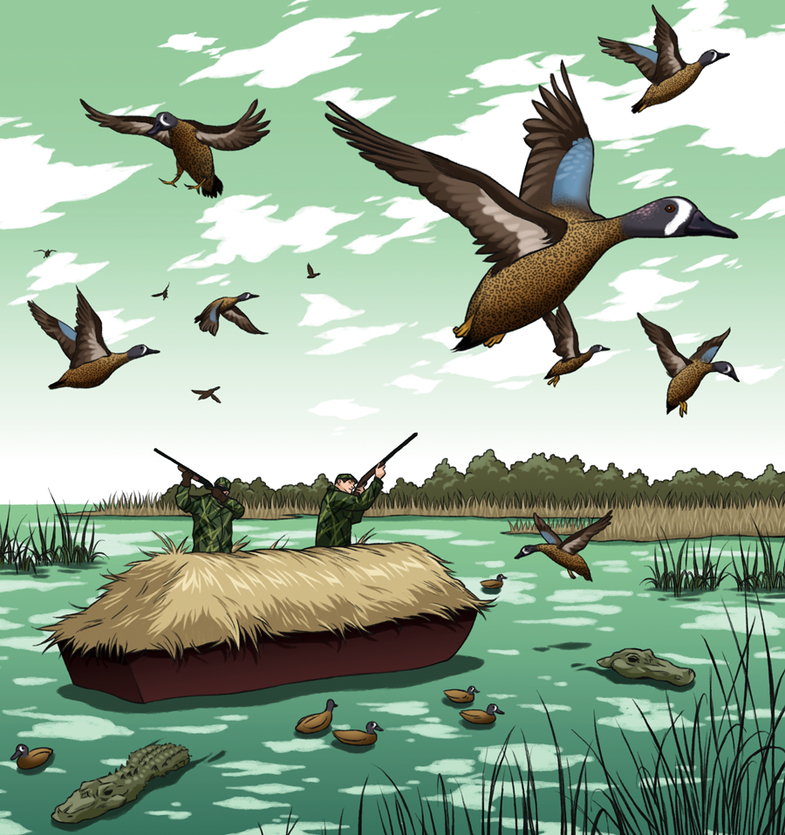 It’s not until the off that I see the they: bluewing teal, flying tight like bees and low on the water after they’d just skimmed the reeds over our heads. In the bow of the boat blind, Shannon Housend is on a duck call in a flash—a quick little cyak-cyak-cyak-cyak-cyak as the birds careen to the western edge of the swamp pond, then cut a jet-fighter 180. Dawn light flashes on their blue feathers, and when the birds set their wings, three shots put a pair on the water.

That’s how it happens with teal. Quick and aerobatic, the pint-size ducks come out of nowhere and are everywhere at once, here today and 100 miles south tomorrow. Greenwing and bluewing teal are the first ducks to migrate, and hunters meet them with Deep Woods Off! and decoys dusty from months in the basement. Most southern states offer a special September teal season, and a growing number of northern states are signing on, too. While short-sleeve waterfowling may not feel like duck season or look like duck season, duck season it is, and it’s like a gong going off in the marsh when you see those teal in the shallows.

Get ready, buddy. Here they come.

The September teal season doesn’t last very long—typically nine to 16 days, depending on the state—and while saner hunters this month are kicked back in dove fields, teal hunters are swinging on ducks with sweat in their eyes.

I’ve hunted teal in some crazy places, and it’s rarely the same approach twice. You don’t have to overthink teal. For the most part, it is a right-place, right-time game. For years, my buddy Lee Davis and I would hike a mile down a North Caro­lina railroad track, cross a small river in homemade float tubes, and make a rough hide beside 3-inch-deep mud sloughs that sucked blue- and greenwings from the sky. In Pamlico Sound, it’s standard practice to load a canoe into a larger skiff for a 3 a.m. big-water crossing, then haul the small boat over saltwater dikes to access remote impoundments. In the Texas playa lakes (think prairie potholes in the dry High Plains), I’ve belly-crawled through mesquite scrub to the water’s edge and lain flat on my back in the muck while birds tornadoed overhead.

And in Louisiana, at least on this morning, I’m tagging along with a couple of Cajuns in the marsh complex west of Lake Cataouatche—30,000 acres of swamp cut by a bewildering maze of bayous and ditches. It’s rough country, but Matherne’s duck boat is serious business. Powered by a turbocharged Subaru car engine straight-shafted to a 14-inch prop, it’s essentially a 16-foot-long Ginsu knife designed to chop through lotus, arrowhead, and mats of goo thick enough to float a whitetail deer. It’ll push 50 mph.

“But more important than the fast is the muscle,” Housend tells me. “This baby floats when it can, cuts a path when it can’t.”

We do a lot of both, floating and cutting through miles of serpentine bayou. As we pull into a 10-acre marsh pond carpeted with duckweed and lily pads, pinpricks of red light reflect from the eyes of a dozen gators. Heat lightning pops in the distance as we toss out three bags of decoys in two scattered groups and run the boat into brush. Matherne breaks reeds over the gunwales as Housend doles out the bug dope.

This teal hunt isn’t the most action-packed of my life. I’ve seen bluewings fall out of the sky like storm-driven leaves, 40 birds in a flock, a swarming, swirling mass, on hunts when you tell yourself, One bird, one bird, stay on one bird, but it’s like picking a fly out of the air. This morning it’s twos and threes and the occasional wad of a half dozen, but the birds that want in don’t think twice. They cruise over the marsh with wing tips brushing the saw grass, then beeline for the decoys. It’s the easiest teal shooting I’ve ever had, birds backpedaling 20 yards out and 2 feet off the water. Getting here was four-fifths of the battle.

“It’s crazy what we do for these birds, eh, Mr. Eddie?” Housend says. “Grown men out here slapping mosquitoes, in a boat you could use to chop wood. You either understand it or you don’t. Ain’t no middle ground.”

It’s like this all across duck country about now. It’s the waterfowling version of a high school two-a-day football practice in late August. Start early. Work the kinks out. Find the groove after a few months off the field.

I keep one eye on the sky, the other on an alligator oozing closer to our dead ducks. I feel for the fellow. We’ve both been waiting for this.

Tough Act to Follow
If you think your first chance on a teal flock is tough, the second one will really trip you up. Shoot at a teal flock and the ducks will typically spring skyward, almost vertically. Be ready if your first shot connects. There’s no time to reposition, so keep your cheek welded to the gunstock, swing the barrel under the rising flock, and let your eyes find a single bird rocketing toward the heavens. It’s a classic swing-through lead, except the barrel moves through the bird from below. Pull the trigger when the barrel blots out the teal. Trading larger duck shot for No. 6 pellets helps.