Photo by Donald M. Jones Maine’s management plan for black bears is a proven success. Voters may kill it anyway.... 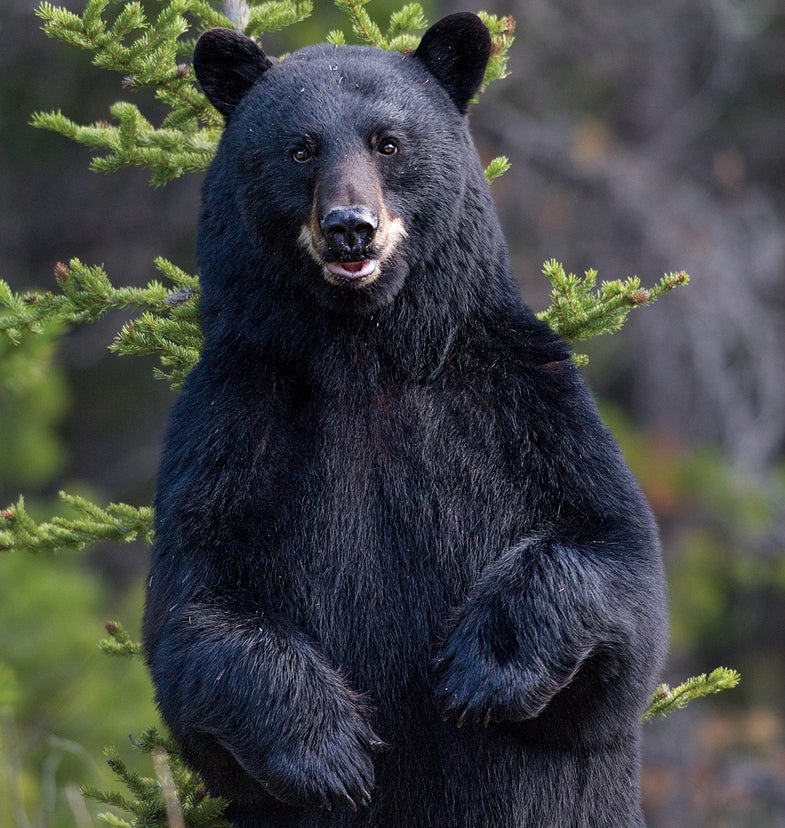 Maine’s management plan for black bears is a proven success. Voters may kill it anyway.

Wayne Bosowicz remembers when black bears were so disdained in Maine that the state paid him to hunt down the “nuisance animals” with his hounds. “Bears were considered trash,” says Bosowicz, 71, a registered Maine master guide. “For a long time, there was even a bounty on them.”

Bosowicz and Maine’s bruins have come a long way since then. Interest in bear hunting in Maine has increased to the point where they are now a valued big-game animal, and the population has grown from 18,000 in 1990 to about 32,000 today, making it the largest in the East. Maine is widely considered to have one of the nation’s best management programs, offering three carefully regulated hunting seasons and a special trapping season, and Bosowicz’s Foggy Mountain Guide Service has become one of the most successful bear outfitters in the country. Upwards of 11,000 hunters pursue bears in Maine every year, more than half of them nonresidents. A 2004 study found that bear hunting contributes about $60 million annually to the state economy and supports more than 900 jobs.

Nevertheless, Maine’s bear hunting heritage as we know it could soon come crashing down.

In November, Mainers will vote on a referendum that, if passed, would ban baiting, hounding, and trapping bears in the state. The initiative has been funded almost entirely by the Humane Society of the United States (HSUS), whose leader has promised “to use the ballot box and the democratic process to stop all hunting.” A similar HSUS-led referendum was defeated in Maine in 2004, although by only 6 percentage points.

That the HSUS, a Washington, D.C.–based animal rights behemoth, has succeeded in getting the referendum back on the ballot and has reportedly pledged to spend $3 million this time to see it passed should concern all hunters, says Evan Heusink­veld of the U.S. Sportsmen’s Alliance, whether or not they hunt bears, use dogs, or choose to hunt over bait.

“There’s a very clear lineage that shows that what happens in one state only emboldens the HSUS to try to pass more laws in that and other states,” says Heusinkveld. “If they can pull this off in Maine, which has a long and rich hunting heritage, they can do it anywhere, and that should send chills down the spine of sportsmen everywhere.”

Bearing Down for a Fight

Last winter, the HSUS hired a California firm to help gather the signatures needed to get the referendum on this fall’s ballot. The HSUS also provided $700,000 to a local front group, Mainers for Fair Bear Hunting, which contends that the use of hounds and foothold cable restraints is “cruel and unsporting,” and that baiting has contributed to Maine’s burgeoning bear population by providing additional feed. They claim black bears can be kept in check with the same harvesting techniques that are used by whitetail deer hunters.

Yearly fluctuations in natural foods like beechnuts and berries have a much bigger influence on bear reproduction and survival than bait, they say, and because Maine is the most heavily forested state in the country, the stalking and still-hunting tactics that might work elsewhere are not practical in Maine’s vast, dense woods. The use of bait, hounds, and traps accounts for 93 percent of Maine’s annual bear harvest—with bait alone producing 79 percent.

Biologists also note that they use the same traps to humanely capture live bears for their ongoing studies, and that baiting and hounds allow hunters to be more selective, resulting in fewer sows and young bears being taken.

“What bothers me the most isn’t what the people behind the referendum are saying, it’s what will happen if the referendum passes,” says Jennifer Vashon, one of two full-time bear biologists with the Maine Department of Inland Fisheries and Wildlife who collectively have more than five decades of experience working with bears. “We need all of the tools that we have now to control the bear population in Maine as it is, and if we lose our most effective hunting methods our focus will shift to responding to nuisance bears.”

Even so, a public opinion poll in April found that opponents and proponents of the ban on baiting were in almost a dead heat. That means the referendum could be decided by an expected advertising blitz this fall—especially in the larger media markets in southern Maine, where voters are more likely to be disconnected from wildlife management issues.

“Our biggest challenge is raising money so we can counter the financial resources of the HSUS,” says James Cote of the Maine Wildlife Conservation Council, a grassroots coalition opposed to the referendum (save​maines​bear​hunt.com). “The data is on our side and the message is on our side. The question is, can we raise the money we need to get that message out on TV?”

A lot more than just bear hunting is at stake, Cote adds.

“This referendum is a barometer for the future of hunting,” he says. “People need to stand up for scientific wildlife management, or we’ll let emotions dictate our wildlife policies. We can’t let the HSUS gain a beachhead, because they’ll eventually try to ban hunting altogether.”

Lost in the debate over biology and perceived hunting ethics is the impact the referendum would have on lives of many Mainers. Guides, like Wayne Bosowicz, as well as outfitters and sporting-camp owners rely on bear hunting for a large part of their livelihood. The ban would hurt hundreds of small businesses, particularly in sparsely populated northern Maine where jobs are few and far between.

“It’s crazy,” Bosowicz tells me. “Our bear program is the envy of other states, and our biologists are opposed to the ban. But public sentiment can overrule biological facts.

The irony, of course, is that Bosowicz could be back to working for the state—once again killing unwanted nuisance animals.