Waterfowl Tips: How to Hunt the Goldeneye Boom

Photo by Donald M. Jones According to the U.S. Fish and Wildlife Service, the 2013 goldeneye population was 17 percent... 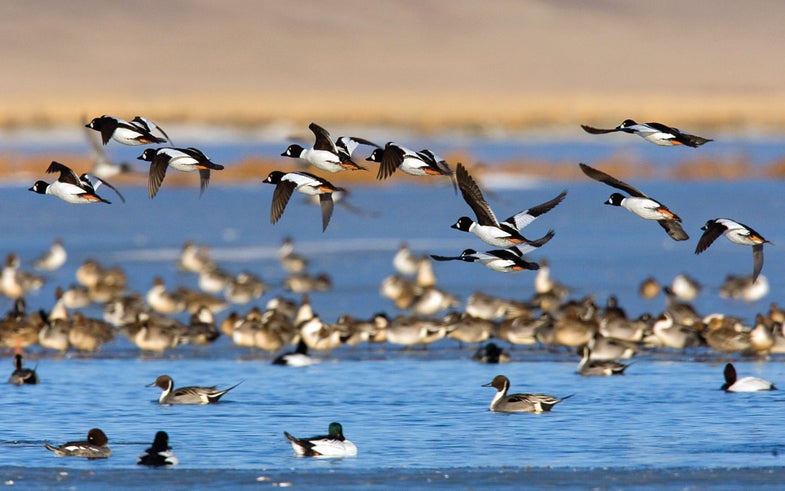 According to the U.S. Fish and Wildlife Service, the 2013 goldeneye population was 17 percent higher than in 2012, and 10 percent above the long-term average. Combine that with last year’s bitter winter, and the end result was a lot of hunters killing goldeneyes. With a little cold weather, this season could be just as good. Here’s how to strike gold now.

Find the Habitat
You won’t shoot many of these ducks in a backwater pocket. While many hunters think of the goldeneye as a diver, it is technically a sea duck and prefers big, deep, open water. My best goldeneye hunts last season were on rocky river points adjacent to deep pools. My buddy Tim and I shot a limit in 30 minutes one morning with gang-rigged decoys anchored in 25 feet of water.

Find the Fish
Some hunters disparagingly call goldeneyes fish-eaters because they eat a lot of baitfish. When winter weather gets especially cold, schools of shad congregate in deep holes and often die en masse; winter shad kills are common on reservoirs. Flocks of gulls make them easy to locate. If there are goldeneyes in the area, they’ll pile in right alongside the gulls.

Get the Spread Right
These ducks often refuse to decoy to anything but goldeneye blocks. The standard bluebill-heavy diver spread will grab their attention, but when it comes time for the birds to set their wings, they’ll aim for the six goldeneye decoys you set off to the side. Be sure you’re positioned for a good shot.

Shoot Them Dead
Sea ducks are the toughest waterfowl out there. Their feathers and fat are dense enough to withstand extreme cold, and their muscular bodies are built for high-end flight speed. Expect even well-hit birds to require a follow-up shot, and be prepared for a boat chase if one attempts to dive and escape. Cut off your shots at 30 yards and you’ll lose far fewer birds.