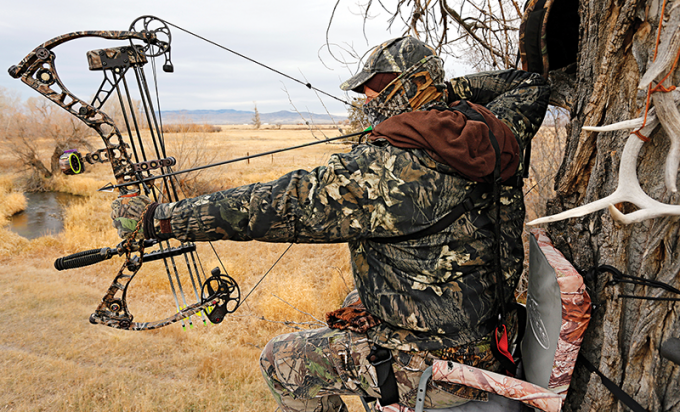 Photo by Denver Bryan / Images on the Wildside

The Landscape: I want to be in a long, wooded drainage with cornfields on one end and heavy cover on the other. Open-country deer think nothing of walking a mile-long strip of timber to get from bed to food, so you can cherry-pick a spot to intercept them.
The Setup: Calling is a part of the game in open country. Many hunters like decoys, but I prefer to be tucked just into the woods so that a buck has to come investigate the source of the calls.
The Stand: I like a big lock-on with a roomy platform, set about 20 feet high with climbing sticks. Lower than that and you’ll get busted.

The Landscape: I like a saddle full of deer sign between two hardwood ridgetops, bordering a thicket. Acorns are still a key food source for does in early November in this area, but it doesn’t hurt to have some agriculture or food plots nearby.
The Setup: The best deer sign in my country is a primary scrape. You know one when you see it: It’s the size of a picnic table and full of deer hair. You can also smell it. I set up downwind of that, as high up on one of those ridges as I can shoot.
The Stand: I like to get 18 to 22 feet high in a big, roomy climber. If the wind shifts during the day, I’ll just climb down and change trees.

The Landscape: I look for a woodlot upwind of a river, a ravine, a four-lane highway—any kind of “wall” that the deer won’t cross. ­Ideally, there’s a subtle funnel upwind of my stand with soybeans nearby.
The Setup: The trick is remaining undetected by the numerous does and little bucks that are bound to pass me before a big buck shows up. I want to cross the wall and slip into a tree with as much cover as possible.
The Stand: Ladder stands are silent to climb. I set them facing away from the spot where I want to shoot. That keeps me hidden from the deer I don’t want to shoot.