Deer Hunting Tactic: How to Kill the No-Cover Buck

How to set up where there’s no place to hide. 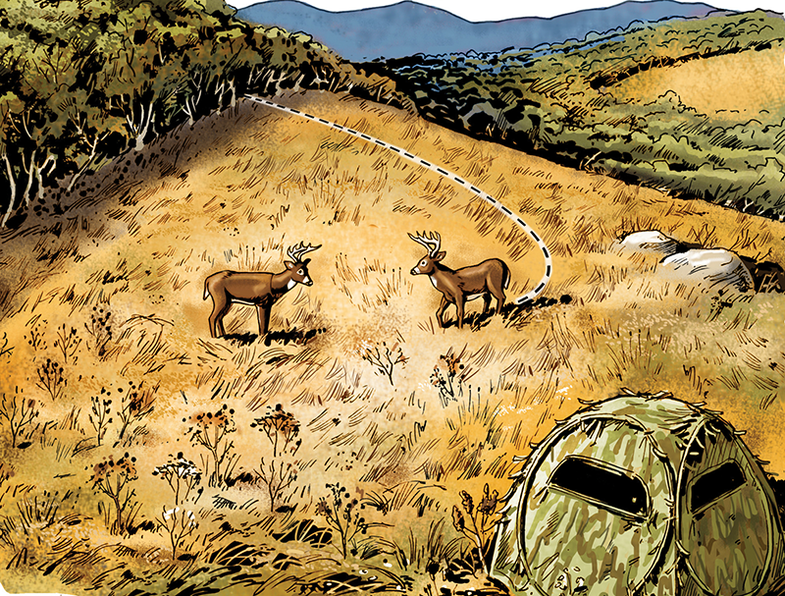 Here’s the good news: You’ve got a nice buck hitting a field every night. Now the bad news: You can’t set up on its entry trail because there are no trees at the edge of the field suitable for a stand. But this three-step strategy will get you a shot.

1. Take the middle ground.
Instead of setting up along the treeline or relocating back in the woods to a staging area, set up a portable ground blind in the middle of the field. Whitetails usually aren’t spooked by a strange object as long as they get a good look from afar. Before setting up, glass for several evenings to determine where the deer likes to enter and exit the field. This way you can establish a pattern and be ready for it.

2. Add an interloper.
Stake a single, standing, subdominant buck decoy about 15 yards in front of your blind. You can make the decoy even more realistic by installing taxidermy eyes, which give a more natural shine. Tack a white handkerchief to the decoy, then run monofilament line to the blind, so you can occasionally flick the tail. Do not place urine-based scents on the decoy. The scent decomposes and will cause the deke to stink in an unnatural way.

3. Get him in range.
At this time of year, mature bucks are apt to investigate and approach your fake face to face. Point it toward you so that an incoming buck will have to swing close to the blind to establish eye contact, giving you an easy shot. This setup is primed for afternoon-only hunts, as mornings often find deer lingering in the field. Always wait for the deer to leave the field before exiting the blind. If deer are dining extra-late, bark like a dog. This will scatter them without spooking, preserving the element of surprise for your next hunt.