Bucks don’t disappear during peak rut. You just need to learn where to find them. 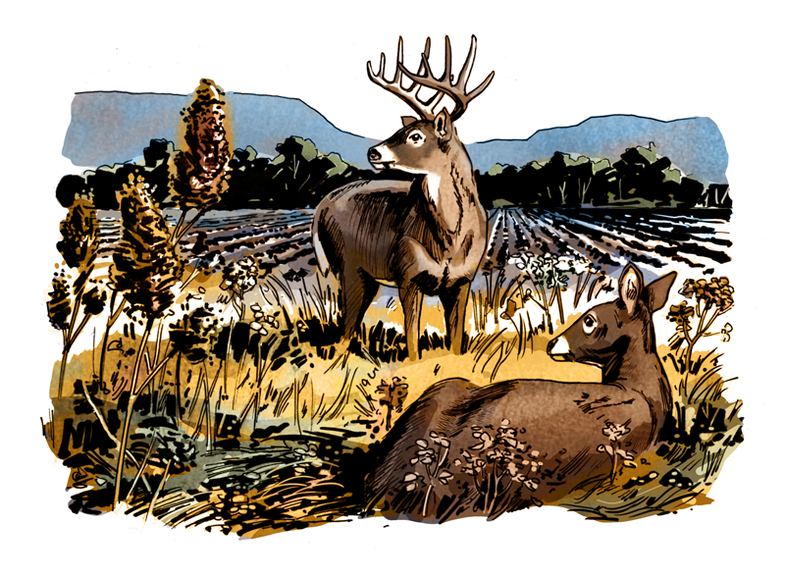 Lockdown is a catchy word, but it doesn’t accurately describe that stretch of peak breeding season when mature bucks seem to vanish. Bucks aren’t imprisoned with their does during this seven- to 10-day phase. Their locations and movement patterns just change dramatically from those of the pre-rut.

Throttled down is a better description. Instead of high-energy running and chasing, the bucks are now either (1) shadowing and breeding a cycling doe or (2) slipping between doe areas searching for a new mate. That’s your key to lockdown success: Focus on these two activities and where they put the deer.

Breeding Bucks
A cycling doe doesn’t want to share her chosen mate. He doesn’t want to share her, either. To isolate themselves, they slip slightly away from major doe hangouts. So look for small pockets of cover—a brushy finger or island, a small ravine or ditch—just off a core doe area. Last year I nailed a heavy 9-pointer shadowing an estrous female in such a spot.

Speed-scout these pockets. Look for large tracks—and especially for halfhearted impulse scrapes and fresh rut rubs, where a buck has torn up saplings to impress the doe. That’s your lockdown hotspot.

Alternatively, glass these areas from a distance to spot a cycling doe or her suitor. The female is apt to be pacing nervously in a small area, looking back a lot, usually with her tail crooked out. A buck standing guard near isolated cover often has a doe nearby. Once you’ve spotted deer, plan your stalk or ambush.

In-Between Bucks
Dominant bucks may move between cycling does three or four times during peak breeding. These are golden opportunities to ambush them.

Stake out the downwind edges of doe bedding areas during midday to catch him scent-­checking for another ready mate. Later in the day, focus on any nearby feed fields that does gravitate to. Another prime spot to intercept an in-between buck is a travel route between core doe areas.

Bucks using these corridors won’t be in a hurry, the way they are during the pre-rut. And that just makes it easier to take careful aim when a trophy slips along the thick, rugged trail in front of you.

Is it peak breeding or are you just hunting the wrong spot? Here are four ways to tell.

The dates are right. Check your notes or ask a local biologist when peak breeding occurs. Lockdown will span from a few days before to a few days after that date every year. Moon phase and weather won’t change it.

You see fawns wandering around looking lost. The doe has booted them temporarily, something she does only when she’s ready to breed.

You see few lone does. Most does are breeding and therefore ensconced with a buck in a pocket of cover. Those that are done breeding are quick to rejoin their family group. So if you do see a single doe, get ready to make a quick shot. A big buck is likely to be following close behind.