When I heard that the 2015 Ford F150 pickup would use aluminum body components, my first thought was, “Would the... 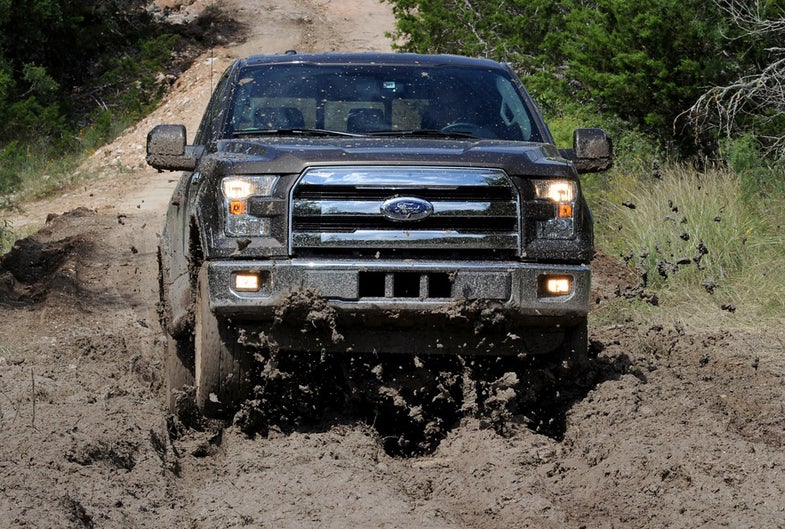 When I heard that the 2015 Ford F150 pickup would use aluminum body components, my first thought was, “Would the new truck be durable enough?” After seeing and driving the pickup this week, I don’t think that will be an issue for anyone who hunts and fishes out of the new truck. As the engineers explained to me the qualities of the “military-grade” aluminum found on this truck, I kept thinking about the “aircraft-grade” aluminum used in scope tubes. The scopes I use are plenty durable, and I think the new truck will be, too.

Ford is going this route primarily to save weight and improve performance. In all, the 2015 F150 is 700 pounds lighter than its predecessor. The diet allowed engineers to increase the tow rating by 1,100 pounds (to a maximum of 12,200 pounds). The payload rating also increased to 3,300 pounds.

Ford knows that truck buyers don’t put fuel economy first; nevertheless, it remains an important consideration. So another aspect of all this weight shedding is an improvement in fuel economy. EPA hasn’t finished the certification process (should be done sometime in November), but Ford is confident the new numbers will reveal fuel savings of 5 to 20 percent, depending on the engine and rear axle combination.

I spent time towing a large trailer as well as crawling the truck through an offroad course that replicated the kinds of challenges outdoorsmen face—steep hills, mud troughs, assorted rocks, and rutted trails. The all-new suspension not only improves vehicle handling while towing, but the new offset shock-absorber system provides a far more comfortable ride without the vicious head snapping so often seen when you’re driving over rough terrain. You’ll also experience far less steering-wheel kickback when driving on washboard roads and the like. The new frame lowers the center of gravity, which delivers a big increase in stability. At the same time, underbody components have been tucked up, so ground clearance actually improves by nearly an inch.

Important for those of you who tow, the truck now features a “smart” trailer connector that monitors the trailer’s brake and running lights. If you prefer, there is also the option of a rear-mounted camera that can help you hook up without having someone in the back to guide you. And, that weight-savings program helped increase cooling efficiency by 30 percent.

I spent most of my time driving the Super Crew. What I like here are the folding rear seats and the flat floor, which work together to deliver some really productive storage space. You can easily kennel your dog back here and still have room for all the rest of your gear.

Ford also spent a lot of time on the new tailgate. For 2015, you’ll see a remote tailgate release as well as a remote-operated power tailgate lock. (They’ve also been working with the aftermarket to make sure caps and tonneau covers will work properly with this new configuration.) The Boxlink is a unique interface consisting of four reinforced plates located near the box corners to which lockable cleats (for additional tie-down spots) can be attached. The Boxlink is also used to anchor the optional bed divider, and it supports the optional ATV ramps as well.

The 2015 F150 will be available with four engines: a 2.7-liter Ecoboost V6 (comes standard with Auto Start-Stop), 3.5-liter Ecoboost V6, a 3.5-liter V6, and a 5-liter V8. There will be five trim levels: XL, XLT, Lariat, King Ranch, and Platinum. And there’ll be three body styles: Regular, SuperCab, and Super Crew. The truck should be in dealer showrooms by mid-November. Base price will be a bit over $25,000. Depending on model, trim levels, and options, final price can run up well over $60,000.