These three new rifles fit a range of needs and budgets. 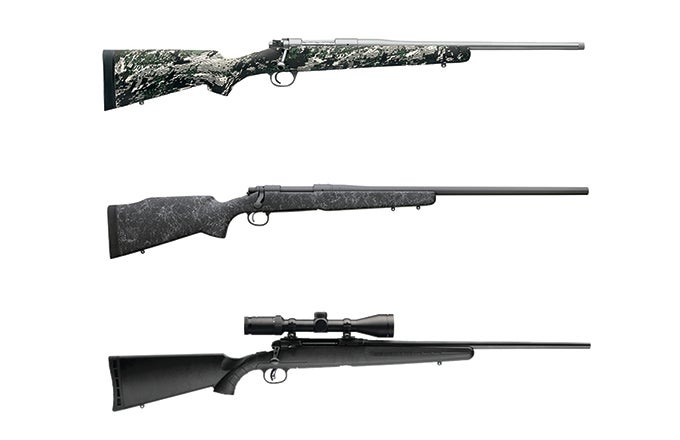 Whether you’re after an ultralight mountain gun, a long-range shooter, or a bargain tackdriver, there’s a 2014 model for you. Chambered for classic deer rounds, these three rifles feature reliable designs with modern upgrades.

The ****Skinny: Built on the vaunted made-in-the-U.S.A. 84M short action, the Adirondack has a controlled-feed bolt and three-position safety. Its excellent trigger breaks at 3 pounds 6 ounces, which—incredibly—is only slightly less than this rifle’s overall weight. The downside to any light rifle is recoil, but the Kimber comes with a Pachmayr pad, and you can add a muzzle brake. I hadn’t range-tested the Adirondack at this writing, but my friend Adam Heggenstaller reported that his averaged 1.35-inch groups with Federal 168-grain Fusion ammo.

The Bottom Line: For trackers and still-hunters, this is a breeze to carry, fast to point, and plenty accurate. $1,768; kimberamerica.com

The Skinny: A 700 action with a bull barrel, the Long Range is mated to a Bell and Carlson M40 tactical stock that’s as rigid as a rail thanks to its aluminum chassis. At 9 pounds without scope, it’s a little heavy—but fine if you have a short walk to your stand or believe in accuracy over mobility. The adjustable X-Mark Pro trigger has a crisp 3-pound squeeze that will make you feel like Carlos Hathcock when a whitetail steps into view. My test rifle in .30/06 shot 0.56-inch groups with Black Hills 168-grain match ammo.

The Skinny: Rifle accuracy depends on a good barrel, precise mating of barrel to action, a rigid stock, and a good trigger. The Axis puts all of that together at a Walmart price, and with a barrel-nut system that is the envy of the industry. The plastic stock is metal-reinforced at the recoil lug—where it matters most. And Savage’s revolutionary AccuTrigger is included. My test .25/06 shot 1.12-inch groups with 117-grain Hornady InterLock bullets, and its trigger broke at 3 pounds 9 ounces.

The Bottom Line: The Axis feels cheap but shoots well, and no one can argue with a $339 real-world price tag. $489; savagearms.com