Forget the grill or oven. The best venison steak of your life gets cooked in a beer cooler. Trust us. 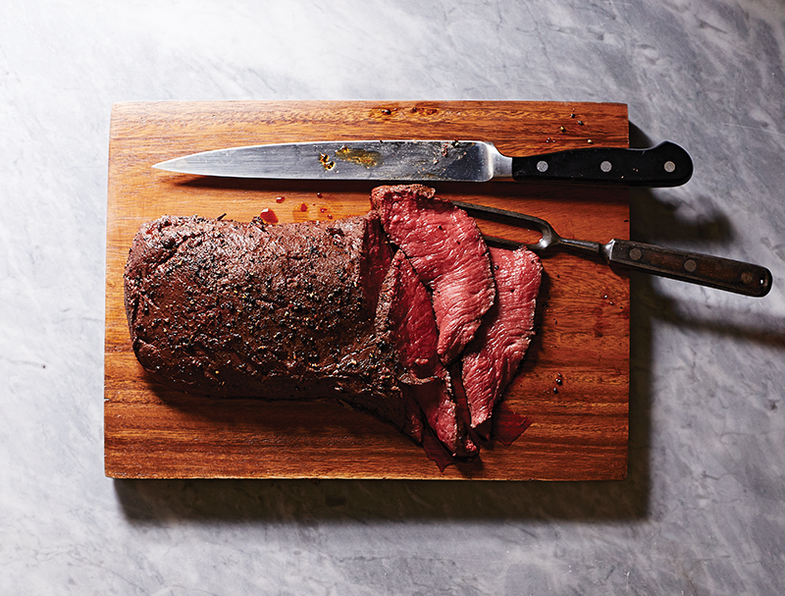 All you need to cook a perfect venison loin is a beer cooler, a zip-seal bag, some hot water, and a digital thermometer. By perfect, I mean perfect: medium-rare from the outside in and spectacularly, succulently tender. And it’s foolproof—you can’t overcook it. And no joke: You cook it in a beer cooler. A little bit of backstory, before I tell you how.

This is a downhome riff on an avant-garde cooking technique known as sous vide (French for “under vacuum”). By vacuum-sealing meats (or anything else) and then cooking them in a temperature-controlled water bath, chefs turn out incredibly luscious cuts. Unlike traditionally cooked meats, there are no variations in the doneness—that is, there’s no pink center to a medium-rare tenderloin because the whole thing—even the outside—is uniformly pink. (The exterior can be quickly browned afterward, if desired.) Precise heat control means that ­medium-rare is exactly that. Sous vide has revolutionized restaurant kitchens, and thanks to the ­cooking-tech guru Nathan Myhrvold, who adapted a slew of laboratory-level techniques like sous vide for home kitchens in his book Modernist Cuisine at Home, and who inspired this backwoods variation, it might revolutionize your hunting camp, too.

So gather your supplies. You’ll need a venison tenderloin. Ideally, your deer processor vacuum-sealed this for you. (If not, we’ll address that shortly.) Next, a cooler—any hard or soft-sided cooler big enough to comfortably hold your tenderloin and at least 2 gallons of water. You’ll need a digital thermometer, too. The best kind for this technique is one with a probe connected via a cord, so you can monitor the water temperature without lifting the cooler’s lid. (Supermarkets and home centers sell these thermometers for about $15.)

Bring the tenderloin to room temperature. Fill the cooler with at least 2 gallons of 140-degree water. The hot water from my tap runs about 120 degrees, so I just amend it with some boiling water from a teakettle. Stir the water well to ensure an accurate reading from the thermometer, and adjust by adding more hot or cold water until you’re at 140 degrees. Drop the vacuum-sealed tenderloin into the water, make sure the thermometer probe is submerged, and close the cooler lid on the probe cord.

Depending on the size of your tenderloin, it should be cooked to medium-rare (126 to 130 degrees) in about an hour and a half. (The water temperature will slowly fall to about 130. If the temperature drops below 130, add more hot water.) But don’t worry about the timing—you can allow the tenderloin to sit without a single issue for up to four hours.

Your tenderloin isn’t vacuum-sealed, or you don’t own a vacuum sealer? Not to worry. Ziploc makes an inexpensive Vacuum Freezer System with a handheld pump that removes air from the bags. Alternatively, you can use a standard zip-seal bag. For that, put the tenderloin in the bag with a tablespoon or so of olive oil. Seal the bag except for a finger-size gap at one corner. Now slowly lower the bag into the water in the cooler; as it sinks, the water pressure will expel the air. Tilt the bag to submerge the sealed corner, then seal the remaining gap at the last possible moment so as much air as possible is driven out.

If you want some char or browning on the exterior of your tenderloin, roll it around in a very hot pan with some butter after removing it from the cooler. Just a minute per side will do. But the browning is optional.

The meat requires no resting time, by the way; you can slice and serve the venison the moment you lift it from the cooler and remove it from the bag. Drizzle it with a little melted butter or olive oil and season with salt and pepper.

Finish with Fire
A standard-issue, hardware-store blowtorch works great for putting a fast brown sear on this venison. But a blowtorch has a wealth of other culinary uses, too.

Use one to singe away the pinfeathers on waterfowl. Make a few passes with a blowtorch to tighten and crisp up the skin on a whole fish or fillet. Toast marshmallows for indoor s’mores. And a torch makes quick (and weirdly enjoyable) work of roasting peppers or peeling tomatoes.