Photo by Charles Alsheimer It’s time for a three-day weekend, and today is the start. Tap-dance, prevaricate, or double-deal so... 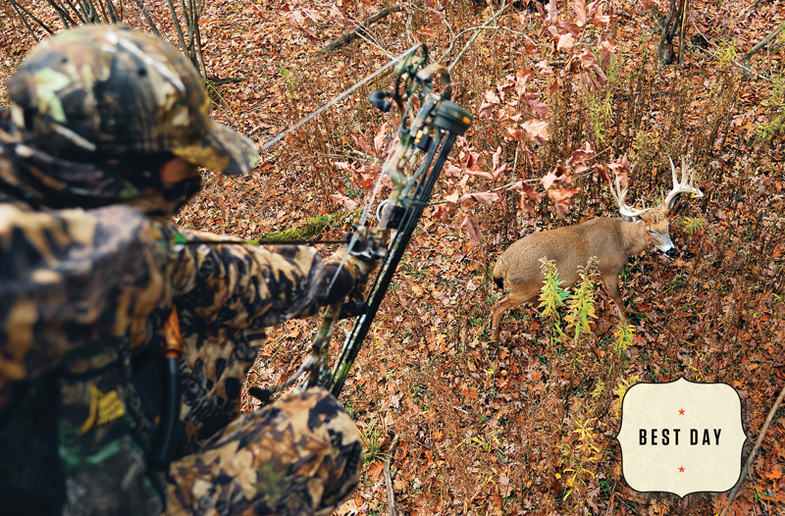 It’s time for a three-day weekend, and today is the start. Tap-dance, prevaricate, or double-deal so that you can be in the deer woods all day today, the Best Day of the Rut. You’ll need the rest of the weekend to butcher your buck and get the head to a taxidermist.

Up to this point only a few does have been popping, but right now a buck can hardly swing his head without sticking his nose in estrous scent. Even the old, passive breeders—bucks that usually won’t rise from a bed until a hot doe shimmies past—will be on the prowl today, and you need to be out there to greet them. With the cooler weather of November settling in, and the moon setting in the early dawn sky, the stage is set for some true excitement.

Default plan: Be Passive
One advantage of hunting this day is that success is largely a matter of just letting a buck walk into the trap you’ve set for him. Sure, there are stand sites where—regardless of the direction of their approach—deer can’t bust you, and you can rattle and grunt until you’re sick of it. But there are other equally good spots where a buck can only approach from one or two certain directions that allow a hunter to get a shot, and it pays to be in such a location during crazy time. Suburban woodlots or other divided covers that limit a deer’s entry and exit points are the best examples.

Forget rattling, decoying, or even heavy calling in these circumstances; the vast majority of incoming bucks would swing downwind of you on their approach, and the game would be over. But just because you can’t be aggressive-with-a-capital-A today doesn’t mean your hunt won’t be arduous, because your mission is to stick in that stand from dawn to dark. Rutting whitetails do not keep a clock, and your new wall-hanger is as likely to swing past your stand at 10:30 (or noon, or 1 p.m.) as during prime time.

So stay in the saddle, let the deer do their thing, and be ready for action at any given moment. If it sounds boring, I can guarantee it won’t be when a giant slinks toward you just as you’re contemplating a nap.

Optional Plan: Get Aggressive
Stands and blinds are wonderful deer-killing tools. But sometimes a lack of trees, ground cover, or suitable wind rules them out. You also might not be patient enough to sit for long periods. If either case is true, you need to take the fight to the deer. If you have access to multiple parcels of land (which is often the case in farm country), or you hunt where deer numbers are low (such as big woods), get out your hiking boots.

In farm country, target the known bedding areas on each property you hunt. Your plan is to still-hunt downwind of each of them in a kind of milk run. Bring rattling antlers and a grunt tube, and as you reach the end of each bedding zone, start a mock buck fight. Any bucks you didn’t spot on your still-hunt (some will be bedded at the far side of the thick spot, or simply invisible) should come to the antlers.

In the big woods, start your hunt at a water source like a stream or river and perform the same drill. Keep the wind on one cheek as you still-hunt along the waterway, stopping to rattle every quarter mile or so. Rutting bucks love to use watercourses to guide their travels, and the sounds of the river should cover your own as you move.

X-Factor: Heat
Early November isn’t immune to hot spells, and above-normal temps can put a stranglehold on daytime deer activity even during the most active rut. Passive-plan hunters should adjust stand sites to north-facing slopes and/or spots near water sources. Big-woods hunters should continue to follow their aggressive still-hunting plan.