The Other Africa: A Wingshooting Oasis

This continent isn’t just for big-game safaris. Some of the world’s best wingshooting happens here 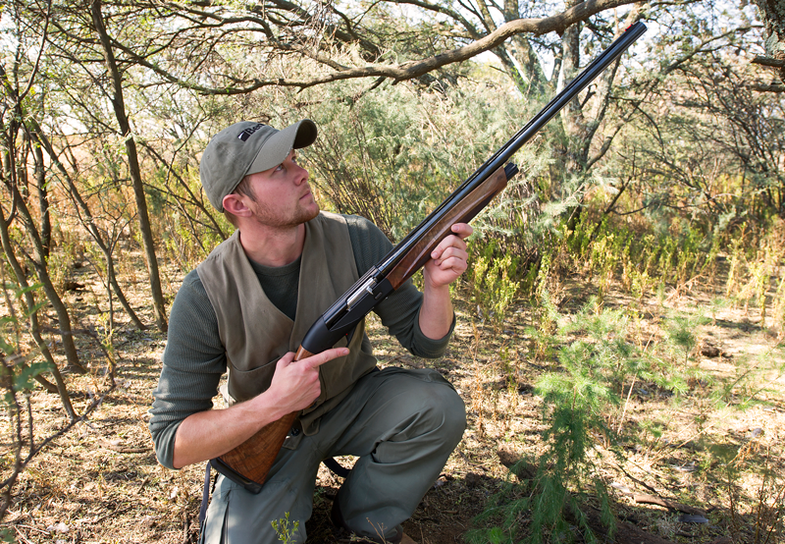 We hiked across the grass field, shotguns in hand, eight wingshooters stretched out in a wide row with half as many serving as blockers at the end. In front of us, a pair of pointers quartered, occasionally locking up on a particularly birdy-smelling patch. The setting and scene felt like any of the hundreds of bird hunts I’ve experienced on the Great Plains. Except, everything was just a little different.

Acacias and gum trees had replaced the cottonwoods and plum thickets. Rooigras and coolatai grew where Indian paintbrush and big bluestem would have stood. And at one point, as I cautiously approached the quivering dog, ready for the flush of a bird at my feet, a warthog snorted and charged before it turned and bolted toward safety. As the tuft of its long tail bounced away above the grass, my initial shock gave way to laughter.

Just another day in the uplands of Africa.

Tell another hunter you’re going to Africa, and he’ll assume you mean a big-game safari: kudu, buffalo, maybe even leopard. But before he can list the rest of Africa’s more famous game, you stop him—and probably the conversation—with one word. Birds.

Of my three trips to Africa, two were bird hunts. My first, nearly a decade ago, was an exploratory adventure to Camp Mako, a small French-owned outpost set deep inside Senegal. We gunned through the dusk at fast-flying ganga (sand grouse) along the banks of the Gambia River and walked up Swainson’s francolin with colorfully clad village children acting as our impromptu guides. It might not have been the African safari I had grown up imagining, but the people, the country, and the birds, of course, had me dreaming of a return trip.

Last spring, I hunted birds in South Africa. Along with the others in my group, I stayed at the home of Carel and Carine Coetzer, who operate Grassland Safaris in the Free State province. Carine kept us well fed with home-cooked meals and wonderful South African wine, and Carel organized the hunts with the kind of precision that can only hark back to a former military career—in his case in the vaunted South African Army.

The Coetzers had their work cut out for them with our group—11 American hunters and a lone Italian, Marco Vi­gna­roli, the lead designer of the new Benelli Ethos shotgun. Over the course of the week, we’d test Vignaroli’s new guns on high-volume shoots for doves, walk-up hunts for guinea fowl, and the biggest challenge for gun and gunner alike: the rock pigeon.

The surroundings were familiar—a makeshift camo blind staked into a sunflower field ready for harvest—but within the first few shots I discovered why those who have hunted rock pigeons consider it the toughest wingshooting in the world. The initial flock, a dozen birds, approached almost leisurely, gliding a few feet above the sunflowers toward our line. This is going to be easy, I thought. Twice the size of mourning doves, the mottled rockies were flying much slower and straighter than doves do. But at the crack of the first shot, the flock broke formation and hit their accelerators. (Carel Coetzer would later tell us that rock pigeons fly faster than 70 mph, which put my lead probably 20 feet behind them.) Barrel rolls, vertical dives, rocketing ascents—the pigeons’ aerial maneuvers were more than impressive. The birds were almost impossible to hit, and I wasn’t the only one struggling. Down the line, I heard my friends curse and—when I wasn’t firing or reloading myself—watched them empty their guns with only a few pigeons hitting the fine African dust.

My bruised ego was buoyed over a lunch of tomato sandwiches and grilled sausages, eaten in the shade of acacias that were hung with teardrop nests of sparrow weavers. None of our group had yet to solve the riddle of how to hit rock pigeons with any consistency. We agreed our leads were lacking and listened attentively as Carel instructed us to keep our faces down and rise slowly from behind the blinds so as not to spook the flocks before even pulling the trigger.

After our lunchtime lesson, I heard more whoops than curses. I can’t say we hurt that particular population of pigeons all that much, but there is a certain sweetness that comes with success after struggling. As the sun—big and red, quintessentially African—hit the horizon, I made it a point to lift a white-flecked pigeon to my face and breathe in a bit of this country.

The next day I doubled my shot output and significantly increased my average—if only because most of the birds were doves of the redeye and Cape turtle variety, which were almost easy after the rock pigeons. There were also some rockies mixed in, enough to keep me guessing, but even those got easier as I started doubling my lead to catch up to the rocking and rolling flocks.

In the days that followed, we hunted helmeted guinea fowl. Prehistoric in appearance, the birds flush with a racket of wingbeats and cuk-cuk-cuk calls. Despite their lumbering flight, they are deceptively hard to intercept, but I connected on a few. I also checked a yellow-billed duck off my life list when it jumped from an unseen puddle into my shot pattern. And later on I was nearly run over by a duiker that another hunter had kicked up.

As familiar as the wingshooting here can feel, it is the unexpected wildness—the sense of never knowing what bird or beast will burst from any given thatch—that is so unlike anything I could experience at home. That wildness will always draw me back to the uplands of Africa.