If you’re determined to fill your tag and you’re up for a truly heart-pounding hunt, try one of these two killer ground setups. 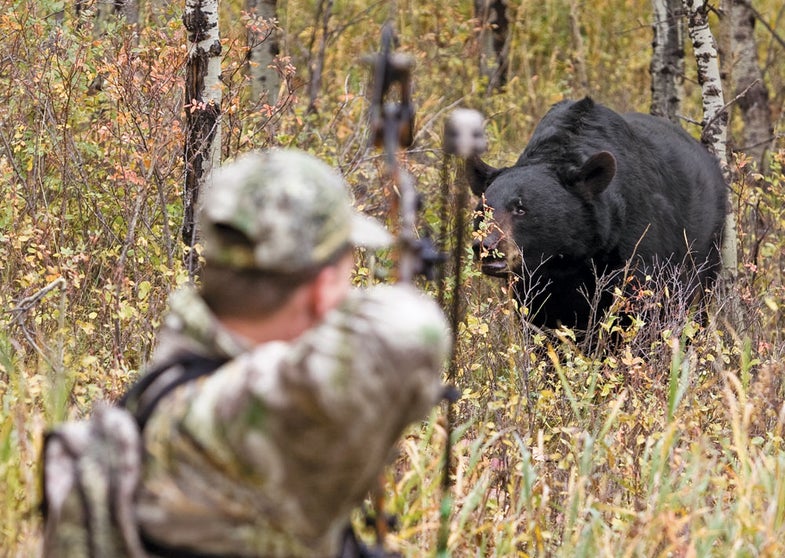 There are times when you have to get on the ground to arrow a big bear. Either the best ambush point offers no suitable place to hang a treestand or the biggest bear is wise to the stand you’ve already hung. In both cases, the solution is to get on the bear’s level (at your own risk, of course). If you’re determined to fill your tag and you’re up for a truly heart-pounding hunt, try one of these two killer ground setups.

1) Smoke Him Out
As the days begin to shorten in autumn, bears enter a stage called hyper­phagia in which they gorge themselves in advance of hibernation, often feeding all day long, putting on 2 or 3 pounds a day. Any major feeding area, therefore, is a great place to find bears now. Trouble is, many of their favorite spots, including clear-cuts, apple orchards, blueberry bogs, and raspberry and blackberry thickets, lack suitable stand trees. To take a bear in a place like this, the first thing you need to do is scout the area for scat, tracks, and traces of fur to tell you where the bruin is doing most of its feeding. Once you figure that out, pick an open area where you can get a shot, move crosswind about 20 paces, and make a natural blind. Try to choose a spot that already has good cover, such as a blowdown, stump, or thicket, as bears are acutely aware of changes in their feeding areas.

Walk back out to the opening you chose earlier and fire up a couple of scent sticks, which are legal in many areas that don’t allow bait (be sure to check local regulations). Now just sneak back into your hideout and wait for a hungry bear to show up. Theoretically, the approaching bruin’s attention will be locked on the sweet-smelling smoke—not on you quivering in the shadows—and you’ll be able to keep it together long enough to take the shot.

2) Back Off the Bait
The majority of black bear bait sites feature a permanent (or at least long-term) treestand that is situated downwind and overlooking the goodies. The biggest bears, however, often know not only where that treestand is, but whether or not a hunter is in it. Circling downwind of the stand to check with his nose and often his eyes, a big boar will not hit the bait until he’s absolutely certain the perch is unoccupied. And that means, if you’re willing to go to the ground, you can use the stand as a decoy.

First look for the faint trail that curves through the undergrowth downwind of the treestand; this usually lies just within sight of the bait barrel. Broken plant stems, paw impressions in the moss, and freshly snapped branches should be all the evidence you need, but you may also see obvious tracks or scat. Once you’ve determined the bear’s route, look for a natural hideaway downwind of it and get comfortable. I should probably warn you: You will be afraid as that big boar pads
in to investigate. But wait for him to walk past you, and then take the
quartering-away shot.