Waterfowl Tactics: Have Your Best Hunt Ever 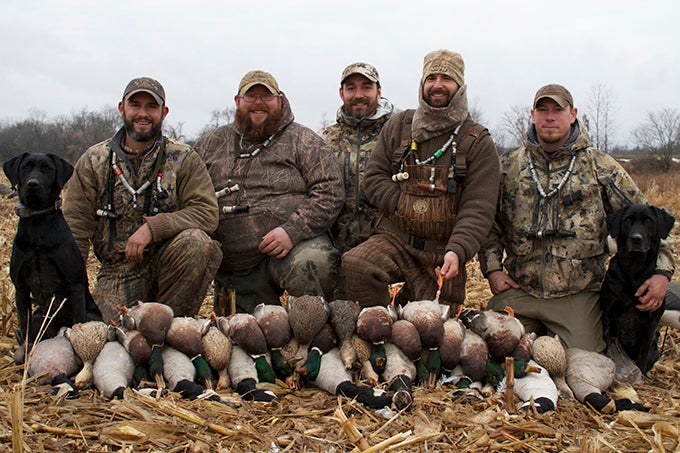 Day one: a five-man limit of mallards, five black ducks, and nine Canada geese. Day two: a seven-man limit of geese, five mallards, and one black. Day three: a seven-man limit of geese and four mallards. Had I known this long weekend in early December was going to be my best hunt of 2013, I would have brought a sharper breasting knife. Arliss Reed, my good buddy and an Avery pro staffer (averyoutdoors.com), had planned this cornfield-mallard hunt for months, and the mallards, blacks, and geese followed the script.

It was a banner New York hunt, with a few key factors making it such a success:

We scouted high fields, near open water.
“Every successful hunt starts with the scout, but it’s even more important if you’re running traffic,” Reed says. We hunted three different fields during our three-day hunt. Reed picked out the highest cornfields in the area near productive waterfowl flight paths—so he knew passing birds would see our spread. On day one, when we shot the most ducks, he knew they’d be over our field right at sunup.

We went heavy on spinning-wing dekes.
Mallards will land among goose decoys, but geese don’t like duck dekes. Reed runs three dozen to five dozen Greenhead Gear Pro-Grade Canadas ­(avery​­outdoors.com) and two to four Mojo spinning-wing mallards ­(mojo​­outdoors.com). “But the geese hate the Mojo when it’s on, so you need a remote model to turn the wings off when Canadas show up,” he says. “So long as it’s off, the geese will decoy.”

We set up on the best possible cover.
When you’re running traffic, it doesn’t matter where you put your blinds in the field as long as they’re fully concealed. “Because the corn was brush-hogged we couldn’t hide there, so we set up the layouts along a grassy ditch on the field’s edge,” Reed says. To keep a small footprint, hunting with seven guys on day two, we brushed in four blinds. Knowing the birds were coming in thick, no one minded waiting a turn in the warm truck.

We staked the Mojos front and center.
It’s hard to believe unless you see it, but mallards and even black ducks will try to land right on top of a spinning-wing decoy. Stake your spinners smack in the middle of your kill hole. Reed likes a long, narrow landing strip with the dekes spaced evenly across, staked at different heights. When you’re running five to seven layout blinds, this gives everyone a relatively squared-up shot when the birds mob your setup.