Photo by Mark Raycroft Three vicious rubs marked a trio of cedars, and a pair of scrapes nearby smelled of... 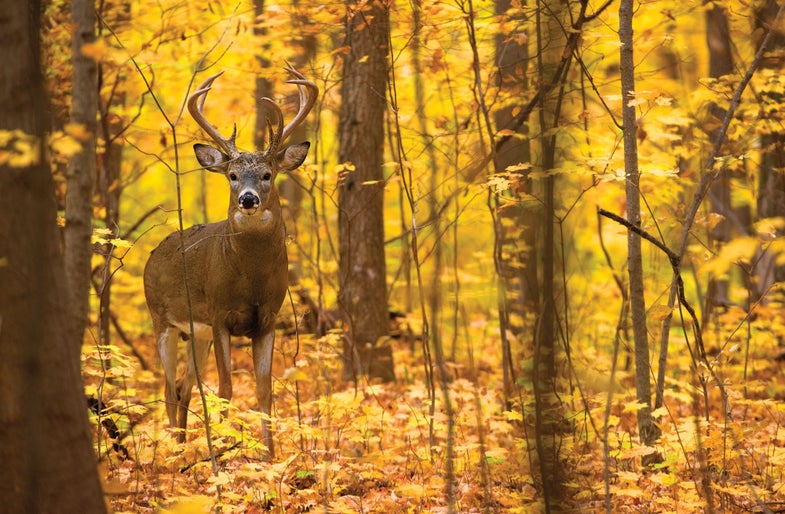 Three vicious rubs marked a trio of cedars, and a pair of scrapes nearby smelled of earth and musk. Buck sign like this is common in early November, but in October’s first blush—when the maples are just peaking and goldenrods earn their name—it’s always a surprise.

I suspected it was made by a nocturnal buck. But later, having quit a slow sit nearby, I was hiking back to my truck before dusk when I spotted a deer at the field corner where I’d seen the sign. I knew I was looking at its creator—a slab-bodied buck with a towering rack.

The next day, Oct. 8, I hung a stand there for my father, and he talks about that hunt to this day. Twenty minutes before dark, a 150-inch, chocolate-horned 8-point emerged from a thicket, worked over one of the scrapes, and jumped the fence into the field. By the time my father gathered his wits, the buck was out of range and walking away. But Dad hit his grunt tube, and the big 8 spun a 180 and pawed the ground like a bull ready to charge. He made three scrapes like this, in the middle of the field, and then walked slowly to within feet of my dad’s stand tree. Only by the time he got there, it was too dark to shoot.

Hot Does, First Sign
Stuff like that is not supposed to happen at the beginning of this month, widely known as the October lull, when hunters assume bucks—especially mature ones—burn daylight on their bellies and move only in vampire mode. Most guys either focus on shooting does or grab a grouse gun or muskie rod and “wait for things to get good again.”

I know from the research that buck activity actually increases steadily from velvet shed through the rut. But like everyone else, I’ve suffered plenty of early-October skunkings, as a host of changes—rising hunting pressure, warm fall temps, the acorn and leaf drop—can make buck movement, however present, less visible and predictable to us.

On the other hand, I’ve also seen isolated but unmistakable bursts of red-hot buck activity right in the heart of the lull. I’ve spoken to other deer geeks who’ve noticed the same. So I dug a little deeper and researched biologists’ fawn-drop charts, which reveal that between 1 and 2 percent of does come into estrus as much as a month ahead of the primary rut. That may not seem like many, but if you know anything about bucks, you know they aren’t going to miss any opportunity to mate. Older bucks especially, which have the most breeding experience, will be actively searching and competing for those few early-cycling does.

The key to getting in on the action is that first hot buck sign, like the raked tree trunks and torn-up earth that led to my dad’s encounter. The fact that young bucks don’t typically start making hard-antler rubs until late October and that older bucks make 85 percent of all scrapes means any rubs and scrapes you find now likely belong to a stud—one that’s apt to respond to rut tactics, including calling, rattling, and decoying.

Take a Wisconsin buck I shot on Oct. 4 a few years back. The 140-class 10-point had started putting down sign at the edge of a beanfield, and my friend Ted thought the area was worth a shot. “If you set up where he comes out to feed, he’ll bust you on swirling winds,” he warned. “So set up on the far side of the field and bring a buck decoy.”

I staked the deke 15 yards from my stand, facing the buck’s anticipated entry. Buck decoys are normally shunned by does that don’t want any harassment, but the old nanny that fed to within 20 yards of my fake was the exception. She stared. She head-bobbed. Eventually she stomped and blew, clearing the beanfield of a half dozen other feeding deer. I figured my night was over.

But five minutes later, as dusk was settling, I spotted movement in a far field corner. My binocular showed Ted’s buck, wading into the beans, oblivious to the blowing doe and resultant chaos. When I hit my grunt call, he locked in on the decoy, stiff-legged it 200 yards, and took my arrow just as he was lowering his head to send my fake into the next zip code.

A Quick Buck
I’ve tried a host of tricks to beat the so-called lull: moved off the field edges to hunt freshly fallen nuts or fruits; made stealth missions tight to a late-rising buck’s bedding area; waited for cold fronts to get bucks on their feet a little earlier. And I’ve had some success in each case. But I’ve become more and more convinced that the quickest way to some heart-thumping action right now is to scout hard to locate those first blowups of buck sign. It may take a long walk; you might need to check more than one property; and you may not see rubs thick as your thigh. But any decent, piping-fresh buck sign now likely tells of a good buck amped up by an early breeding opportunity. And it means you get to start hunting the rut a month sooner than everyone else.