Beat the Lockdown: Target the Buck Between Does

Rut action slow? Pursue a buck that's leaving one doe and looking for another 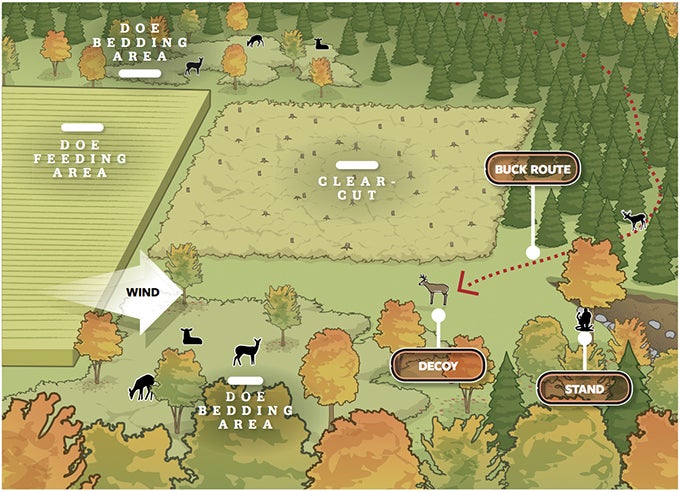 It happens every season. Just when the chasing phase reaches its height, everything comes to a halt as bucks hole up with newly willing mates. But you can still fill your tag. The key is to catch a buck between does. A dominant buck may breed with two to five does during the peak mating period. That means he’ll move from one doe to another up to four times. Here’s how to catch him:

**1. Locate doe feeding areas. **Oak stands, fruit trees, cropfields, and food plots are the top spots. Look for tracks and feeding sign in the woods, and glass open areas to confirm does are using them.

2. Find doe bedding areas. Focus on good cover nearest the food. Does love to bed on gentle knolls in semi-open cover with scattered brush, tall grass, and thickets. Follow trails to uncover clusters of beds 2 to 21⁄2 feet in diameter or smaller.

3. Pinpoint the buck routes. Once you’ve found several doe bedding areas, look for travel corridors between them. Small bucks will move directly from one area to the next. Mature bucks will take a more circuitous route, using a brushy creekbottom, overgrown fenceline, or heavy timber between cutover areas to move unseen. Look for large tracks and the occasional fresh rub to confirm that the route is active.

**4. Hang your stand. **Once you find a likely buck route, follow it. Look for a pinch point, such as the head of a wash, a rock outcropping, or a riverbank, where the deer is forced through a narrow opening. Hang your stand downwind with a clear shot to the trail. Another great spot is directly downwind of one of the doe bedding areas; this is where a good buck will stop to scent-check for a hot doe—and present a good shot.

5. Stake a fake…and wait. If the cover is fairly open, place a subordinate male decoy just off the route to draw a buck over for a fight or to make him pause for a shot. Calling with doe bleats or short grunts can also draw a buck that’s not traveling the exact route you’re watching. Finally, plan to stay on stand all day. If a buck finishes with a doe at 11 a.m., he won’t wait until evening to look for the next mate. And you won’t tag him unless you’re there.