Groundbreaking data and our own 2,000-arrow test shed new light on the old debate over mechanical vs. fixed broadheads. 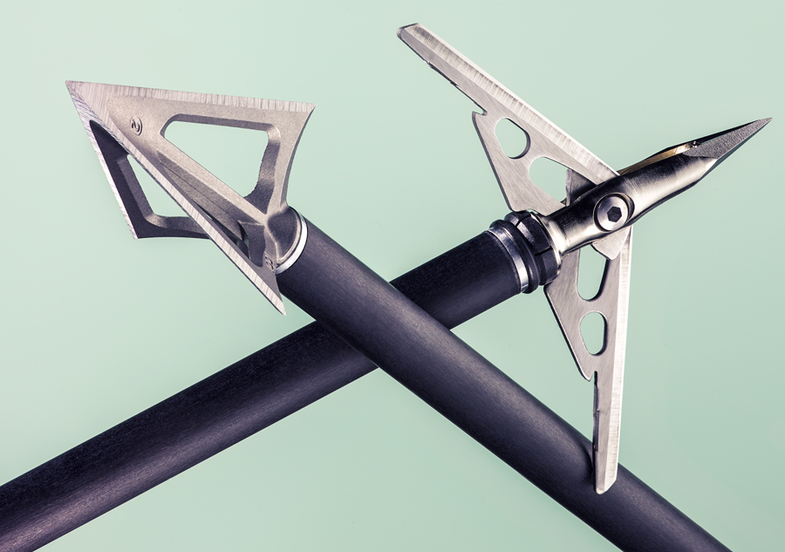 You know the two sides of this familiar argument: On one, fixed-blade broadheads are the more reliable killers; they deliver consistent penetration and are impervious to mechanical failures that lead to lost game. On the other, mechanicals fly just like field points, require no special tuning, and are more accurate, especially at longer ranges. But when data from a new study comparing the lethality of the two types emerged this spring, blowing a gaping hole in the first assertion, F&S decided to test the second—with equally surprising results.

Test No. 1: The Real-Deal Data
For years outdoor writers have struggled to devise the definitive fixed-vs.-mechanical test. Problem is, there’s only one perfect test medium: living deer. Then, this spring, Maryland’s Naval Support Facility Indian Head, a 3,000-acre military installation, published what no one could simulate with ballistics gel and frozen rib cages: the first ever multiyear study comparing recovery rates of real whitetail deer shot with each type of broadhead.

In 1989, Indian Head employee Andy Pedersen started a bowhunting program at the facility, and from the beginning he documented everything from hunter effort and equipment to shots taken and animals recovered. “When we first allowed the use of mechanical broadheads for the 2007 season, I admit I was eager to document their failure. I’d been bowhunting since 1974, and I knew what worked and what didn’t,” he says.

But when he crunched the numbers at the end of the 2012 season, Pedersen was in for a surprise. Hunters using conventional broadheads from the program’s inception recovered 821 of 1,001 deer shot, for a recovery rate of 82 percent. Hunters using mechanical heads since 2007 shot 161 deer and recovered 143 of them, for an 89 percent recovery rate. “I was shocked,” Pedersen says. He had assumed, as many archers would, that deployment and penetration problems commonly associated with mechanicals would result in more lost deer. But the numbers say otherwise.

Still, they don’t quite reveal the full story. Pedersen’s hunters must pass a special education course and proficiency test (though he notes many are newbies who take their first bow kill at Indian Head). Also, because deer are abundant on the base, most shots are close, and a tracking team (complete with dogs) is available for the recovery effort. The study does not, therefore, mirror the typical field scenario. Nonetheless, it is the best head-to-head test to date, and its results turn conventional wisdom on its ear.

Test No. 2: The Accuracy Edge
So what about the other supposition—that mechanicals are more accurate? To find out, I assembled a test team consisting of Trent Kleeberger (a Minnesota indoor-archery state champion), Bob Borowiak (a veteran bowhunter and competitive 3D shooter), F&S deputy editor Dave Hurteau, and myself (both of us members of the F&S bow-test team and seasoned bowhunters).
We shot over 2,000 arrows, pitting four of the top-selling mechanicals against four popular fixed-blade heads. First, we tested out-of-the-box point of impact compared with field points at 20 yards. Then each tester shot 10 three-shot groups with each head at 40 and 60 yards. Here’s what we found:

• Mechanicals don’t fly just like field points, as ad copy so frequently claims. Although they averaged about a half inch closer to field-point impact compared with fixed, neither hit in the same place (.89-inch variance for mechanicals vs. 1.44 fixed blade). While you may have to do a tad more tweaking to get fixed heads to match field-point impact, you’ll likely have to tweak mechanicals, too.

• Fixed heads grouped slightly better at 40 yards (2.99 inches fixed blade vs. 3.27 inches mechanical). This was a surprise, and no anomaly of averaging. Every one of the testers shot the fixed blades better here, although the difference was very small.

• Mechanicals grouped slightly better at 60 yards (4.83 inches mechanical vs. 5.03 inches fixed blade). If you’re the kind of guy who needs to eke out every smidge of accuracy at long range, you might find a tiny advantage with mechanicals. More likely, the difference is statistically insignificant.

• Overall, there’s no difference. That’s right, none. When you combine the 40- and 60-yard results, the average groups are the same, down to the 10th of an inch (4.01). What’s more, the combined groups of the best-performing heads in each category—Slick Trick (3.79 inches) and Swhacker (3.82 inches)—were separated by only .03 inch.

Conclusion: My Mind is Fixed
It’s hard to say what is more surprising—that mechanicals bested fixed blades in a recovery-rate study, or that fixed shot right with mechanicals in an accuracy test. But I personally find the latter more compelling and actionable. For one, the Indian Head study does not account for the longer shots many archers favor mechanicals for. Two, like most of you, I will keep my shots at game inside 40 yards, where I now know for sure that my fail-safe fixed blades will shoot just as accurately as mechanicals, and maybe a tiny bit better.

Because reams of numbers can make readers’ eyes glaze over, we often avoid them in the print edition. But for those who love to dig into the digits, here are the results from the fixed-vs.-mechanical accuracy test.

Web Exclusive: Man vs. The Machine

Just before we sent this story to the printer, we also sent new samples of the test broadheads to the guys at Spot Hogg, who agreed to shoot them through their Hooter Shooter at 20 yards to test for both out-of-the-box accuracy and point of impact compared to field points. We wanted to see how their results using a machine compared to our results using actual shooters. Here’s how it broke down.

Point of Impact
When fired from the Hooter Shooter at 20 yards, fixed-blade heads hit, on average, 2.43 inches from field-point impact. Mechanicals strayed 1.92 inches. In other words—just as we found in our test—neither type of head hits where field points do, no matter what the ad copy says. Of course, you might get lucky with an individual package, but as a rule, you will have to either fine tune your bow or adjust your sights with either type, though perhaps a bit less with mechanicals.

Accuracy
Shot indoors, through the Hooter Shooter, the average fixed-blade group at 20 yards was 1.24 inch. The average mechanical group was .96. If you extrapolate these figures out to 40 and 60 yards, you get the following:

In other words, if you can find a way to shoot your critters indoors, and if you can figure out how to eliminate all human error from your shooting, you will likely do a little better with mechanicals.

Seriously, this test suggests that mechanicals do indeed have better inherent accuracy. Which is interesting. But the discrepancy in results between the Hooter Shooter and actual shooters implies that there is an element of forgiveness at play. One head may have better inherent accuracy, but if another is more forgiving of shooter error, it may produce better field accuracy. And if you’re a hunter, field accuracy is the only kind that counts.