Study what the geese are doing to understand when to cluck, moan, or raise a flag 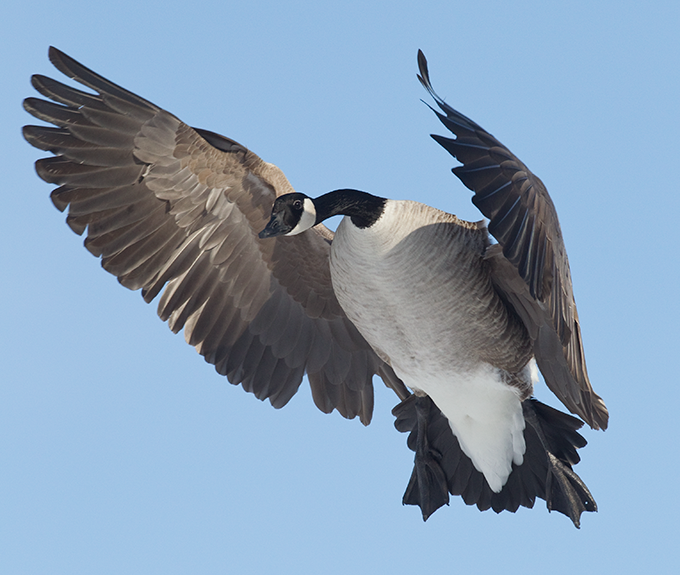 It doesn’t hurt to sound exactly like a goose, concedes world-champion caller John Taylor of Maryland-based Bay Country Calls (bay​country​calls.com), but you also need to learn which calls to make—or not make—and when. For that, he says, just watch the birds.

Look High and Low
Geese flying in a line or V formation way up in commercial airspace are most often new to the area or still migrating. Low, broken-up birds may be looking to land but are easy to overcall, Taylor notes. In both cases, it’s best to skip calling entirely and work a goose flag to lure them in.

Count the Beats
Fast flight tells you the geese have a destination in mind. Hit these birds with slow, deep clucks and double clucks. “If they don’t respond, they’re not your geese,” Taylor says. “If they call back, slow down, or break up in flight, gently speed up your calling, throwing in the odd cluck-moan.”

Talk Them to Death
If birds break off and lose elevation, “pick the most responsive single and talk it down with steady, soft clucks and moans,” Taylor says. One or two committed birds can start a mass descent. “Once they cup their wings and rock from side to side, finish them with fast, loud single clucks.”

**Tip: Cluck U **
“The cluck, double cluck, and cluck-moan are all you need to consistently kill geese,” Taylor says. Make the cluck first by tightening your sternum and then blowing the word dut from your diaphragm. Use dut dut for a double cluck, and
dut awe for the cluck-moan. Vary the sound by deepening the dut, like you’re channeling Elvis.