Whitetail Deer: Don’t Be Afraid to Get Pushy with Trophy Bucks 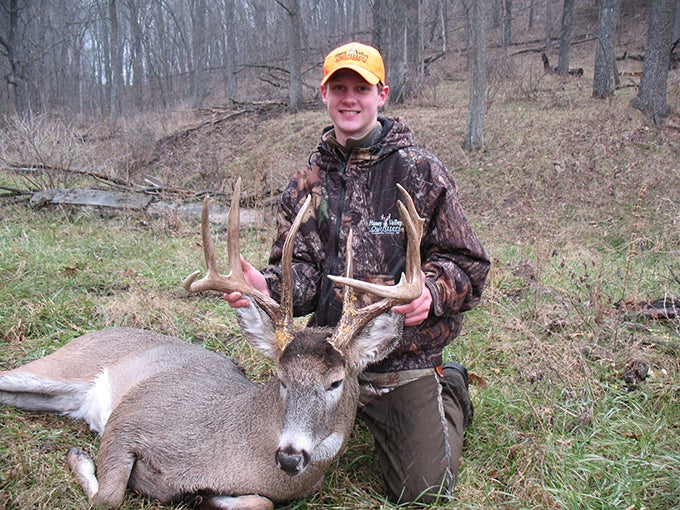 Wisconsin guide Jamie Greene spied a monster 8-pointer during the early archery season. By November, however, the buck had disappeared, and Greene had his mind on does. “I have clients for the first few days of rifle season, but when they leave, we stage drives for herd control.” But this month, where there are does there are bucks, and Greene wasn’t going to call anyone in his crew off a trophy. The giant 8-pointer that 15-year-old Justin Redman shot that day proved that the rut is a perfect time to push prime doe cover. Here’s how the hunt went down.

The Hunt Plan: Hillside Doe Drive
One of Greene’s favorite tactics is to push a timbered ridge toward its point, where it juts into an open valley bottom. “Deer love to bed on those slopes where they can watch below and use the wind to detect danger from elsewhere,” he says. When pushed, they sidehill toward the point, which funnels them toward the posters.

“This particular ridge is only timbered on one side, which makes it even easier to push. It also has some rock outcroppings that help funnel deer and a steep ravine toward the end that deer will cross at only a few places.” Greene put three posters on a logging road that parallels the ravine and a fourth, Redman, in the valley bottom. “If deer sense a trap,” says Greene, “they’ll bail off the hill and head across the valley.” 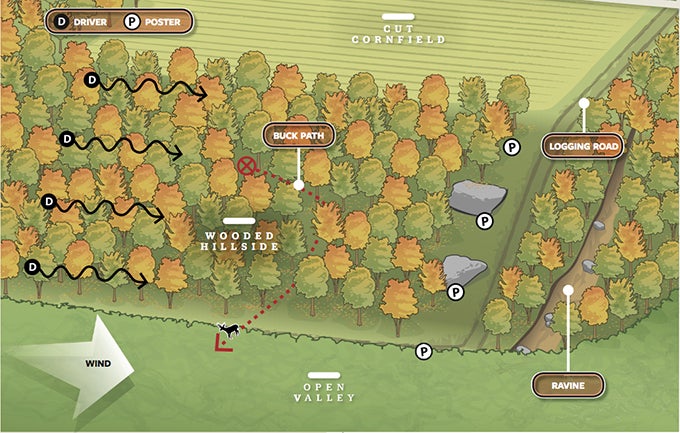 Giving the ­posters a 20-minute head start, Greene and three other drivers moved in upwind. A slow pace is critical, he says. “We really just loaf through the cover. We want the deer to know we’re there, but we don’t want them to panic and run, which creates tough shooting for the posters.”

The buck and eight or nine does got up in the middle of the drive. From his vantage in the valley, Redman spotted the deer milling on the hillside. They moved toward the road for a short distance, then dropped down into the valley to escape the drivers. When the buck stopped broadside at about 80 yards, Redman dropped him. “He was only 15 years old and in his fourth hunting season, but Justin is a great shot and very calm under pressure,” says Greene. “When I saw the buck, I recognized him immediately. He was even bigger than I’d given him credit for.”

The Takeaway: Small Drives, Big Results
This hunt proves that known doe bedding cover is a great place to push out a bruiser during the rut. But you have to know your hunting area intimately.

Choose small, familiar chunks of land to drive. Greene and his party know every trail and crossing on this ridge, which allowed them to put posters in the perfect spots. Also key is that the posters were able to move in silently along the logging road, and the drivers took their time to avoid panicking the deer. If your property has discrete sections of doe cover, a drive during the rut could turn out
a trophy.