Track an estrous doe and you'll have bucks in your pocket 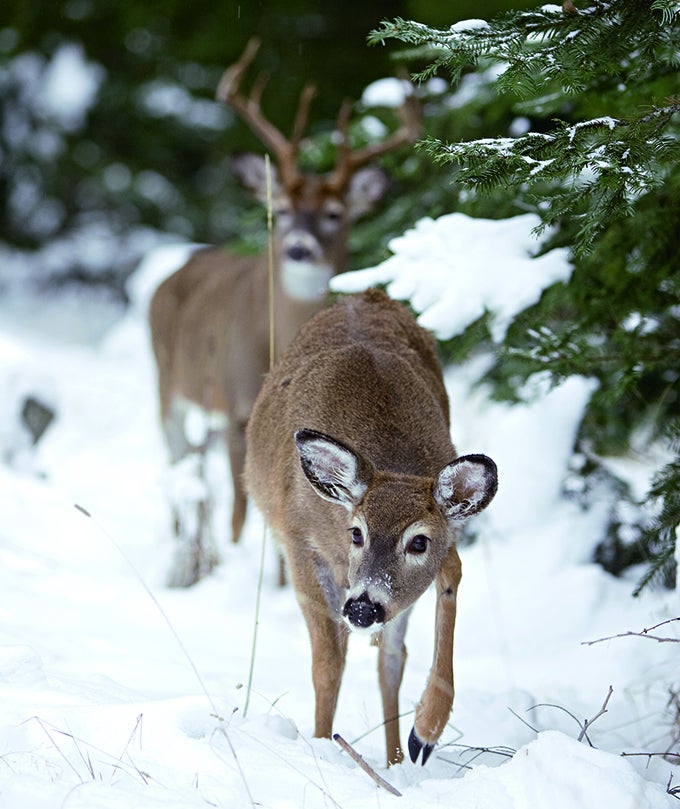 When fresh snow falls overnight, most big-woods hunters are out at first light looking for the track of a trophy buck to follow. That’s a good early-morning strategy. But if you can find and follow the right doe trail, big bucks will actually come to you.

Lady = Luck
An estrous doe, including any late-cycling female coming into heat a month after the primary rut, makes every effort to attract amorous bucks. She may stay on her feet all day, lingering near scrape lines, milling along edges, and feeding in openings where she’ll be seen easily. In short, she’s a buck magnet. Get close and you can tap her drawing power.

But first, you have to get on the right track. When you find doe prints, follow them and watch for rose-colored urine stains in the snow. This is a dead giveaway that she’s in heat. Also, look to either side for the tracks of a flanking buck or two. If she’s close but not quite ready to stand, bucks will zigzag her trail like skiers running a slalom course, each using his eyes, ears, and nose to keep tabs on her exact whereabouts. You can’t miss it.

The Solo Doe
When you find only the rose-colored stains, and it’s clear the doe hasn’t caught the attention of a buck yet, follow her trail, being careful not to spook her. And keep an eye on the flanks. Eventually, a passing buck is apt to spot her, move in to check out her breeding status, and give you a shot.

Should you spook the curious buck, let him go, allow things to calm down, and get back on the doe’s trail. Sooner or later, the buck will circle around and try to intercept her, or she may attract another suitor in the meantime.

Join the Chase
You have a couple of options if the tracks tell you that your doe already has an admirer or two. One is to follow her trail, staying far enough back not to spook the bucks, and wait for an advantage. She may drop down to a lower ridge, for example, allowing you to watch her trail and possibly move forward and catch an eager buck off-guard from above. Or she may skirt the edge of a clear-cut, gaining you an unobstructed shot at her pursuer.

If the doe seems to be circling (which estrous females commonly do to attract as many bucks as possible within a certain range), then your best bet may be to have a seat. The doe will eventually return to the area, suitors in tow. Just be sure you don’t shoot at the first forkhorn that prances into view. It’s usually the biggest buck that brings up the rear. With plenty of breeding experience, a mature animal knows that the doe isn’t quite ready to stand yet—and he’s in no hurry.

So you’ll probably have all the time you need to get ready to make a good shot.