Perfect bullet performance means you can save your shoulder and shoot better, too. 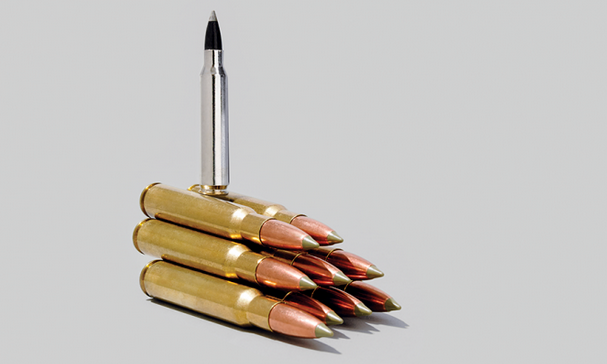 I’ve shot a great many animals with modest rifle rounds, and looking upon the slain critters that could not have been bashed flatter if I’d dropped a safe on them, I’ve wondered: Why on earth would any hunter need more gun?

Power hath its place. If you’d like to dance in the alder thickets with a brown bear, you want lots of it. To hunt Marco Polo sheep, you will have to shoot a tough animal at a very long distance and won’t want a pop gun. But very few of us do this stuff. We hunt deer and antelope and pigs and once in a while elk. For all of that, less is more—and more so now than ever.

For lo these many years, we’ve been told that heavy bullets and lots of velocity was the only way to go. And so we went, and got a flinch and scope cuts for our trouble. But there was logic behind the size-and-speed drumbeat.

Through almost all of the 20th century, big-game bullets tended to blow up on impact, thus failing to penetrate. The best protection against this was more bullet weight. Prior to affordable handheld lasers, range estimation was a guessing game. Here, the best solution was more speed for a flatter trajectory.

But hunters discovered that it was one thing to read about the uncanny effectiveness of the .358 Thunderf – – – er and quite another to shoot the awful thing. Lots of people bought cannons, and then regretted it only once, and that was continually, to paraphrase the Confederate general J.E.B. Stuart.

The simple answer is to downsize. Although smaller, lighter-kicking cartridges have been with us since there were cartridges, they have always come with the limitations mentioned above. Until now.

Today, we have bullets that perform perfectly, all the time. They are much tougher than in the past, and the need for bullet weight to ensure bullet strength is gone. Thus, a round such as the .243, which I used to view with extreme suspicion as a deer killer, can be counted on even for deer that you could saddle and ride.

As far as long range goes, we are now blessed with laser rangefinders, range-compensating reticles, and ballistic calculators that enable you to hit at 400 yards if you will just read the directions.

If you have any doubts about this, visit an NRA-sanctioned mid-range rifle match (600 yards), and all you will see are cartridges such as the .260 Remington, 6.5 Creedmoor, 6.5×284, and .308. The only place you’ll spot a .30/06 is at a service-rifle match, and the .300 magnums that used to be standard equipment are gone forever—they are just too hard to shoot. With these small cartridges, the really good shots can put 60 rounds in a tea saucer from six football fields away.

It may be a bit down the road yet, but I think one of the results of the AR boom will be a generation of shooters that regards cartridges of .223 length and size as standard—and anything bigger as freakish. A couple of springs ago, I was shooting prone next to a young man with an AR who kept staring at my ammo block as though it contained a puff adder, or a Tasmanian devil, or even Hillary Rodham Clinton.

“What are those huge cartridges you’re shooting?” he asked.

So downsize. When it comes time to buy a new rifle (or trade in your present cannon), think much smaller than you otherwise might. The only thing that will happen is you will shoot better—and spend less on ammo in the bargain.

For quick and easy quide to rifle calibers, check out The Recoil Hater’s Guide to the Universe.