Yes, it’s cold, bitterly so. But once a rutting coyote—or three—answers your call and runs into your spread, you won’t need those extra hand warmers in your pocket. 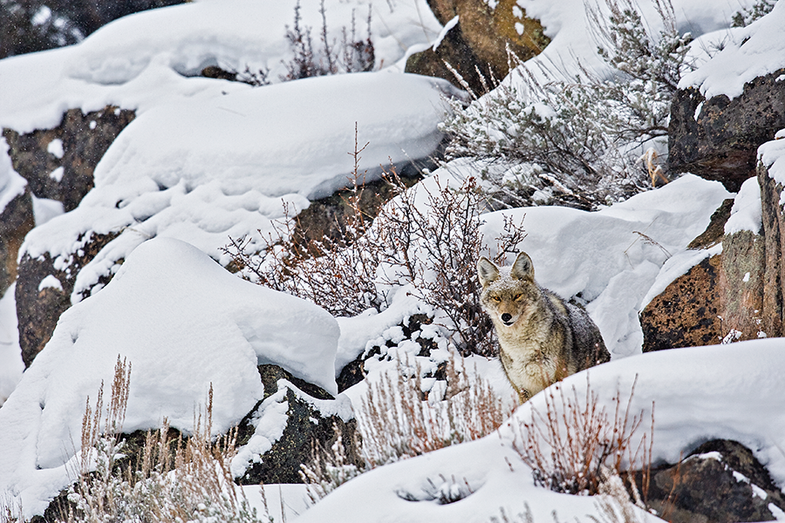 Hungry Eyes: A winter coyote peeks out from the snowy rocks. Photo by Donald M. Jones

There’s been a killing. Like detectives investigating a crime scene, my hunting buddy Dominic Valpiani and I pan our flashlights as we try to piece the clues together: a flurry of wayward tracks in the immediate area; tangled in some nearby sagebrush, a small tuft of fur; a patch of snow splattered with blood. Something, likely a jackrabbit, was blindsided midmeal.

Valpiani laughs a little. “Suppose that rabbit should’ve done more zigging instead of zagging,” he says. Then he marks the spot on his GPS. This could be a good spot to set up on tomorrow’s hunt.

This is the third significant coyote sign we’ve encountered tonight in as many miles, and given the differences between tracks, multiple dogs are working this basin. We get back in the truck and continue scouting, hoping we’ll find even more.

Once we have a hunting strategy in place, Valpiani and I return to base camp—which we’d set up a few hours earlier in one of Idaho’s many sagebrush deserts—around midnight. We’d had grand plans for a winter campfire, but it’s easier to ignite the camper’s propane furnace and listen to the drone of the weather radio. Surprise: More cold is on the way.

Dog Walk: A hunter heads back with a nice Montana coyote in tow. Photo by Brian Grossenbacher

Valpiani and I don’t have access to private land, and by this time of year public-land coyotes have caught on to hunters’ tactics. But February is their mating season—a time when even the smartest coyotes lose their senses.

Before our hunt, we used GPS and detailed maps to peruse public areas neighboring private land where coyotes often find shelter, security, and easy access to food. We avoid low basins where snowdrifts amass, and instead look for south-facing slopes with partially melted snow patches and coyote tracks either coming or going. We’re respectful of boundaries, but we also know that dogs harbored on the other side of a fence will surely hear our calls.

We set up as if we’re calling elk, with a caller 40 to 50 yards uphill and behind a shooter. The key is to keep the initial howls and barks short and abrupt so as not to sound like a dominant dog, which can scare some predators away.

Valpiani and I often follow up with the squealing sounds of a distressed critter. Male coyotes are almost as interested in food as they are in mating. If the sound of an inviting mate doesn’t bring them running, the sound of a companion with a bite to eat will. Coyotes are scavengers and territorial by nature, and by combining our calling, we’re doubling down on two instinctual coyote drivers at this time of year.

The predawn air is stinging cold when we reach our first spot. The vapor of each breath mists over my mustache and beard and freezes, anchoring every whisker like cement. I can barely talk. Even smiling hurts. Just as the first hints of daylight wash over the desert, I see a private fenceline 100 yards to our left and know we’re right where we want to be. The hunt begins when Valpiani breaks the silence with a series of short, subtle howls and barks.

Just seconds after our first call, a coyote replies. Then another. And another. My entire body shivers—not from the cold this time but from exhilaration. I didn’t expect action this good. I hate to interrupt the moment, but I offer up the best crying-rabbit shrieks my chapped lips can muster. The ruse works. Two coyotes appear in the distance—one from a dry creek bed to our right, the other cresting a small hill to the left, far across the fenceline. Both sprint in our direction, and for a moment I’m unsure which one to move on.

The dog on the left pauses behind a rock outcropping, but the one on the right continues its beeline toward us. I raise my rifle and prepare for a shot. I can hear the dog’s legs brushing against the dried grasses as it closes the distance. Nearly 100 yards out, it stops and stares, sensing something amiss. Valpiani tugs on a stretch of parachute cord tied to a small bush, shaking its branches to create the illusion of struggling prey. But the coyote isn’t buying it, and if it doesn’t see something more convincing soon, it’s going to bolt. I center the crosshairs over the dog’s chest and squeeze the trigger. The dog drops to the desert floor—and now the con is over. The coyote by the outcropping races back toward the fence, but in an amazing demonstration of poise and marksmanship, Valpiani aims, shoots, and watches the coyote tumble head over heels, 50 yards from the private-property boundary.

Neither of us knows what to say. There are no woo-hoos hollered or high-fives or mad-dash retrieves. What we just experienced is rare and special, and I think we both want to hold on to the moment for as long as we can. We remain still, waiting until the morning is as calm as when we first arrived.

Behind me, Valpiani breaks the ­silence with another call.

Tip of the Month: Shower-Curtain Camo

Hunting coyotes in February usually means hunting in snow. For an inexpensive snow-camo substitute, use a white shower-curtain liner. Cut a hole in the center, slip your head through like a poncho, and wrap a belt around your waist. The color will match the snow, and the shape will break up your silhouette. The best part is it’s waterproof so you won’t get wet sitting in the snow. For a mottled effect, spray or splatter paint on it, let it dry, and head to the field. It’s also great for your ­favorite goose field or duck blind.