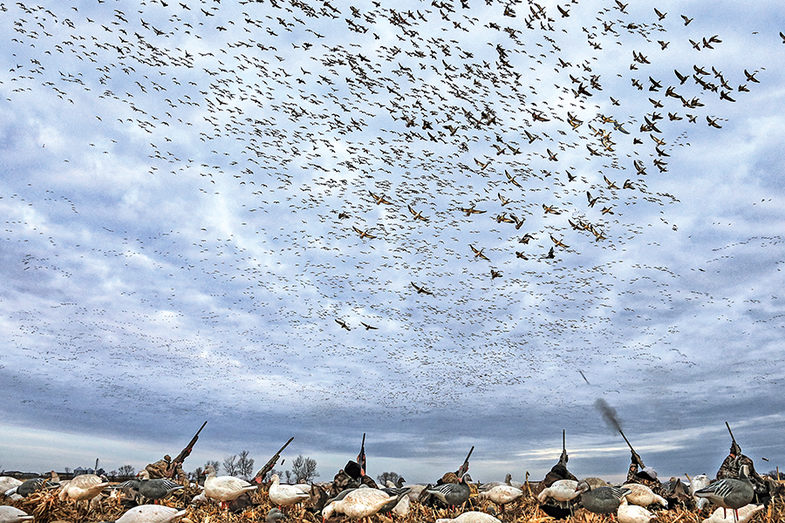 A thousand snow geese, maybe more, hang above me stacked on top of one another from 80 yards on up to, seemingly, the stratosphere. They’re still too far to shoot, but I tighten my grip on the shotgun and widen my eyes to take in the spectacle on this snow geese hunting trip. My ears, too, get a sensory overload. A flock of snows makes a lot of noise, and their excited calling easily drowns out the electronic caller’s four speakers staked out in our spread. Every bird seems to have its own distinct call, and the chorus of squeaks, cackles, clucks, and whines grows in volume and intensity—as if every goose is pleading with the one next to it: Let’s get down there and eat—NOW!

If you listen to some hunters, the snow goose hunting season—or spring light goose conservation order, as it’s known—​is all about the body count. As much fun as it can be to dump an extended magazine’s worth of rounds into a giant flock and watch dozens of snows drop out, the real thrill for true waterfowlers is getting those birds into range in the first place. It takes no small effort and a decent amount of luck, but when it happens, there is no experience in hunting that competes with hundreds upon hundreds of birds fluttering into the decoy spread at your feet, ­every one of them chattering at full volume.

March Madness
Anxious hunters often commence their snow geese hunting season in February, but it’s easy to burn yourself out chasing the early migration’s many false starts. Adult birds, some that have been making this northern flight for 20 years or more, are the first to arrive and, because of their experience, are the hardest to decoy and the most frustrating. No waterfowl teases hunters like a bright white adult snow goose. In March, however, the mottled gray juveniles bring up the rear. Not exactly wise to hunters, these younger birds decoy more readily, although fooling a gigantic flock of birds is never easy.

A successful snow goose hunt starts the evening before with a few hours behind the wheel. I like to drive snow-covered country roads and watch for birds coming and going from fields of disked corn stubble, green winter wheat, or last fall’s millet crop that didn’t get picked up before winter hit. Snow geese are voracious eaters, and competitive. They’ll leapfrog over one another to get to the feed first. And they’ll hit the same field day after day until it’s stripped clean. Once you find a feeding flock, that’s your cue to secure permission—then get a bit of sleep.

Sound Strategy
The day of a snow goose hunt begins early; a 2 a.m. wake-up call isn’t unusual. It takes a lot of time to set a spread of 40 or 50 dozen decoys. Some hunters use just rags, wind socks, or silhouettes, but the deadliest spreads are a mix of all three, plus several dozen full-bodies scattered throughout. The effect is a big white blob in the middle of the field, attracting any flock flying within miles.

Although the wind usually blows in March, you can’t count on it. Once a flock gets close, it takes motion and calling to bring them those few extra yards into range. Motion decoys come in all sizes and designs. My favorite, if only for the carnival effect it gives to what could already be viewed as an absurd endeavor, is one I hunted over last spring with Tony Vandemore at Habitat Flats. It can best be described as a carousel—except instead of painted horses, each of the five arms was adorned with flying snow goose decoys, 24 in all when fully kitted out. Plugged into a deep-cycle 12-volt battery (as ubiquitous in snow goose hunting as on bass boats), the motor whirred and the carousel creaked as it circled, mimicking the swirling tornado of a snow goose flock ready to land.

This hunting also requires you to be a sound engineer, running a spider’s web of speaker wire to speakers set at each corner of the spread. Another deep-­cycle battery provides power to the electronic caller, and every snow goose hunter has his own favorite play­list, one he typically guards with secrecy.

On my hunt with Vandemore last spring, his calls played to the snow geese’s rising frenzy. For the previous two days we’d watched the flocks grow in size above us, only to drift away without coming into range. But when a single bird, a mottled gray juvenile, locked its wings and dropped into our spread that was all it took for the rest of the flock to commit. Soon hundreds of birds were racing to be the first on the ground. Over the din I could barely hear Vandemore from just a few feet away.

I rose out of my layout blind and was momentarily stunned by the literal wall of snow geese in front of me. My first few shots were wild. I was flock shooting, and despite the flock’s density, nothing dropped. My shotgun was fitted with an extended tube, and I had five more shots. I quickly checked my nerves, started to pick out single birds, and dropped them as the flock retreated like a wave receding off a beach. In seconds, the birds were out of range, but I couldn’t help myself and fired my final shot.

Put a Sock In It

Movement is crucial to an effective snow goose spread, but you don’t need a 12-volt merry-go-round to kill birds. Good wind-sock decoys flicker in the slightest breeze, giving the appearance of a few dozen (or hundred) waddling geese. My favorites are made by Sillo Socks (sillosocks.com). A dozen Snow Feeder decoys will set you back just $60, and they weigh a couple of pounds total. They’re an economical and lightweight way to add motion and quantity to your spread, without the need for a trailer full of bulky full-bodied decoys.