Rifles: How to Deal With Missing

What matters isn’t whether you whiff but how you handle it when you do. 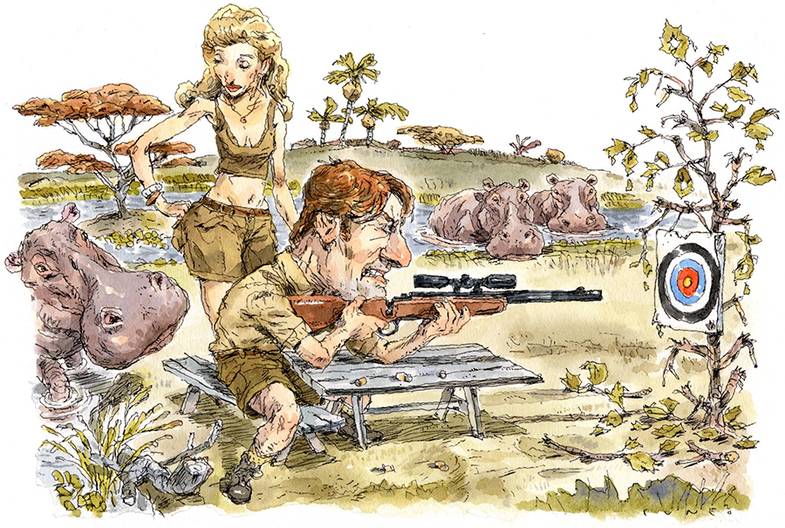 Everyone misses. I can tell you, in excruciating detail, about every one of my agonizing whiffs, even though some go back nearly 50 years. The hits, except for a very few, have lost their vivid colors.

Lead Slingers
In Wyoming, I watched a nitwit fire 19 rounds at a yearling antelope buck standing a shade over 100 yards away. He did this out of a truck window and seemed to think the whole thing was hilarious. The antelope succumbed to the law of averages on the 19th shot.

In Zambia, I watched a Greek hunter, who was one of the handsomest men I’ve ever seen, and who had a blonde girlfriend who was even better looking, try to sight in a Holland & Holland .375 H&H. Shooting over a table, he couldn’t hit paper at 100 yards. I stopped counting the boxes of ammo he went through at six. Then I concentrated on ogling the girlfriend. Finally it got too noisy, and I wandered down to the Luangwa River to listen to the hippos fart, which was nearly as loud.

All of this was fairly benign. Sometimes it isn’t. In northeastern New Mexico, I heard a fusillade that would have fit in at the Battle of Antietam. I walked up a hill to find a hunter and his guide surrounded by spent .338 cases. They’d lucked into a bull that the guide swore would make Boone and Crockett, but the hunter had opened up when the animal was way out of range and hit him in the guts with the first shot.

Humped in agony, the bull shuffled away, with the hunter still flinging lead. He took 19 shots—there’s that number again—without another hit. The hunter posted a reward of $10,000 for anyone who came in with the antlers, but no dice. The elk had vanished.

I hunted with a man in Africa who should not have carried a rifle. He was a tormented soul, a combination of poor physical condition, uncontrollable nerves, and absent hand-eye coordination. He could not hit anything, and he whined about it constantly, blaming his rifle, the trackers, the game, and the professional hunter. This last was a mistake, as our PH was a nice enough guy but took no crap from man or beast.

“Tom,” he said sweetly, “probably it is your rifle. Why don’t you take a rest over that termite hill and see if it’s sighted in?”

Tom got a good, steady rest over what was actually a live safari ant mound and fired. A moment passed. Then an expression of horror came over his face. He shrieked, and ran off into the African sunset, tearing off his shirt and slapping at the little fiends, waves of fat billowing in the fading orange light.

Missing, the Joke
A rancher I knew in eastern Montana used missing as a source of cowboy humor. Periodically, he’d host an Easterner who would be unhinged by the distances, and by the experience of seeing more than one deer a week. For these folks he reserved a special treat.

At the bottom of a dark coulee, the rancher would set up a 50-gallon oil drum, over which he’d throw a ratty gray blanket. At one end of the drum, he’d affix a moth-eaten mule deer mount. Under the blanket, he’d place a couple of sticks of dynamite and blasting caps.

After his pilgrim had missed a couple of easy shots on real deer and was sufficiently demoralized, the rancher would wait until nearly last light and come to a skidding halt in sight of the bogus deer.

“Look,” he would bellow, “down in that coulee, that’s the biggest damn deer I’ve ever seen! Shoot him! Shoot!”

The pilgrim, nearly in heart-attack mode, would see something that vaguely looked like a deer down in the gloom and fire at it. “You missed! Shoot again!”

The pilgrim would, and there were two ways this could end. If nothing happened the rancher would say simply, “Gee, he sure was a nice deer,” and drive away with a hunter who was deeply in shock. Or the poor nimrod would hit a blasting cap, bringing a flash, a thunderclap, and a rain of dirt, causing the rancher to comment: “Boy, you sure nailed him.”

Off-Target Exemplars
I belong to a club that competes in multiple shooting and casting events. In the ’50s, ’60s, and ’70s, we had a member who excelled in every discipline. He was not only the all-around best but was a model of sportsmanship. I’ll tell you that his name was Dave George, because he should be remembered.

On one occasion, Dave missed a skeet target, which he knew would cost him a championship. His exact words, which have since passed into legend, were “Oh dear, that’s going to be very costly.” (By comparison, I know of one skeet shooter who in the same situation hurled his Midas Grade Browning into the Caribbean.)

At a rifle event, where he was dead certain for a victory, he missed a whole string of shots and lost. Dave did not miss whole strings of shots, so he checked his rifle. Some jealous bastard had twirled the dials on his scope as it stood in the rack.

Dave could have gone to the rules committee, and gotten to shoot again—such was his reputation for honesty. But he didn’t. He never even mentioned the incident, and it’s known today only because onlookers pieced things together.

A friend of mine suffered from a long run of bad shooting. He either missed deer or hit them poorly, and it went on for several seasons. He never complained or made excuses. He would track until the blood and the hope ran out, and he’d take his teasing like a man—until it got so bad that the ribbing stopped.

Then he took a shot that looked like a repeat of the rest. It took half a dozen expert trackers to find the buck, but when they finally did, it was a monster. My friend was ecstatic—and we were more so. I’ve never seen a camp so happy at someone else’s success.

Missing happens. But in doing so we reveal to the world what we really are. You can lose a championship or an animal, but by your conduct you can gain something much more important.