Twelve Stages of Being a Deer Hunter

The author reflects on his past whitetail season—the stalks, the shots, and every other memorable stage in the pursuit of deer. 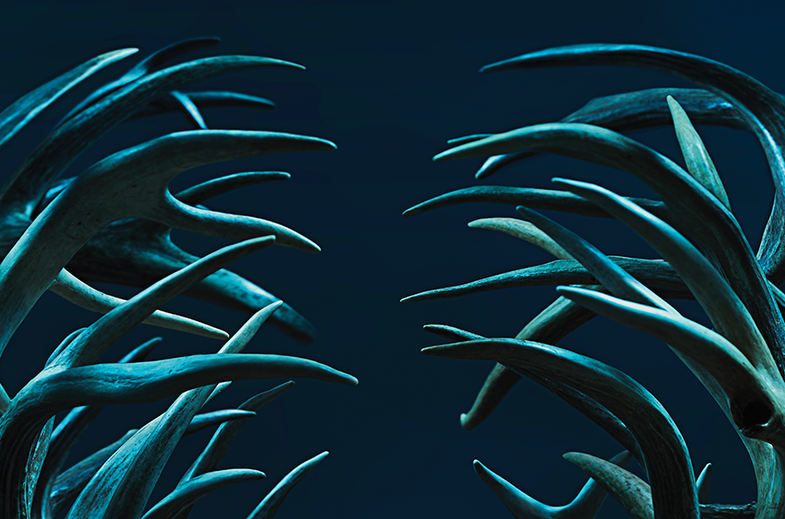 Sometimes I think there are 12 different stages of being a deer. There’s the deer of the imagination, in the weeks and even months before the hunt—​the seasons. There’s the deer you don’t see—​the deer of your desire—​and thirdly, the deer you do see, and then decide whether to take—to attempt to take—or to let it go and search for another. Especially in the Texas Hill Country, where I hunt each year. The deer are not so large there as they are elsewhere, and truth be told as I age they become smaller, almost like air—as if you could fit them in an envelope, as if they existed more in your mind.

It’s their terrain, where you find them, that is so huge, in your mind, with 10,000 points of attachment. Orion, bright burning in the southern sky; the way camp smells when you come back in midmorning, and bacon’s frying, and out of habit you change out of your camouflage and leave those clothes in the sun, even though you may no longer really care for killing anything, even though you may care really not to kill anything. (Well, maybe a turkey. Always, in spring, you find yourself reading new wild turkey recipes.)

Fourth, there are the deer your hunting camp talks about—­almost anyone younger than you, brothers and cousins and nephews, they all still want deer.

Fifth, the deer that got away.

Sixth, the deer that are killed—by you or by another of your family.

Seventh, the way the deer looks in its last moment of life, unaware—so boldly, vitally alive, so unaware of the next-step of mortality—knowing only the physical senses of the world, which are or should be shared by us all. This brings up eventually the question of why we hunt, which is unanswerable, only maybe that it is in us, has always been in us—is still in some, not in others—and is what shaped and sculpted us as a species, and got us, for better and for worse, to where we are today.

Eighth, the deer in the first second after the shot, whether with bow or rifle—the leap, the collapse, and then the stillness, and your heart hammering—you are changed. And then, half an hour later (the sunlight different, better; the returning sounds of morning birds, or, conversely, the purple dulling and deepening of dusk), when you walk as quietly and respectfully as you can through the dry leaves (oak, hickory, hackberry, mesquite, ash) to where the mass of the animal is sleeping now, maybe not forever, but more about that later.

(I forgot something: Before standing up and walking toward where the deer has fallen, you might place the empty bullet casing, still bright and warm, against the trunk of the tree where you were sitting, or on top of, or beneath, a rock—not litter, but instead like a hidden cairn, a memorial to time’s river rolling past—years later, you or yours might or might not be able to find it again, might be sitting beneath that same tree and look down and see the browned metal cartridge, amid the soil and brown leaves and squirrel-chewed hulls of nuts, the engraving on the base smoothed by the world’s erosive appetite, artifact…)

There is the ninth deer, when you kneel beside the warmth of the animal and say “Thank you,” and touch, and marvel at, the hardened antlers of the king.
The time you spend there is not insubstantial.

Deer No. 10, the drag out, or, if you’re in the wayback, the pack out. The weight of your decision made manifest; the new responsibility. You’re no longer the hunter. Now you’re the gatherer, the provider. Your people are waiting.

This brings us to the 11th deer.

Deer No. 12, of course, is the last you’ll ever see of the animal, and the last time the animal will still be the animal and not you, who are eating it. Twelve is the recipe, the meal, the thanksgiving, as you become the deer, ever-the-same, and yet ever-changing. But No. 11 is the last time the deer is in the world, really, as you peel the hide back and pull it from the chilling body, revealing the bounty, the miracle, silverskin and fascia separating red muscles, muscles your hands know well.

It is January as I write this, and what I am remembering this morning is last season, and the way a deer, a buck, can appear when you least expect it, and of how, even if you are no longer brimming with passion to kill one, the animal’s presence still sends the old electrical current through you: recharges that relationship between you and the deer and the woods. I saw a nice buck and watched him—he was in full rut—and walked along behind him for a while, as he trotted ahead, but I did not shoot.

I’m remembering, too, the way that in autumn, I walk up the hill and search for just the right stones, each about the size of a walnut, hickory nut, or pecan—round—which I fold beneath the nape of skin before attaching the rope to the skin to help me peel the hide off, revealing the meat, the bounty, the sustenance. With the little Hill Country deer I hunt it makes the job easier. It’s a trick my father showed me. The hide comes off evenly, cleanly, easily; and the older I get, the more powerful and significant the transition in that step seems to me, deer No. 11, where you get the hide off, and get down to the real business, as if for the first time, of becoming the deer.

The hunter, we all know, becomes his or her prey, and the prey, certainly, sculpts the hunter.

What dozen variations are there, for and within each of us, and where, in the circle, are any of us, on any day? It does not matter, in autumn. In autumn, we walk through the woods, watching and searching and scenting and listening, still touching the earth so firmly, anchored by all these tides of deer.