Turkey Hunting: Outside the Box (Call)

Having trouble with pressured turkeys? Try a new sound. 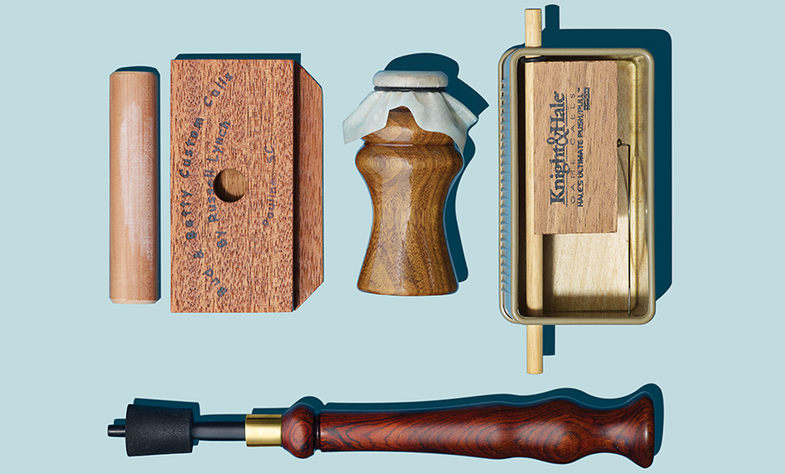 Mouth calls, pot calls, and box calls rule the roost with turkey hunters, but they’re not the only options for striking up a conversation with Ol’ Gob. Hunters in the know tend to keep quiet about the four lesser-known calls here because their effectiveness hinges in part on how rarely toms hear their sweet tones. But when a pressured bird won’t cooperate, any one of these can be your ace in the hole.

If you can’t be bothered to make your own wing-bone call, just buy a trumpet call, which has a similarly soft, organic sound. Trumpet calls are made of exotic woods, metal, or glass and plastics. Like wing-bones, they’re blown using a tight, kissing inhalation. Unlike wing-bones, they can produce loud calls that cut through the wind to strike distant birds.

Originally made from match or cigar boxes, this traditional Southern call has been around for a couple of hundred years and specializes in realistic soft talk. A predecessor to the box call, it consists of a small wooden box and a separate striker. One major advantage is that different strikers can be used to produce a wide variety of sounds.

Like a diaphragm call attached to a megaphone, a tube call is simply a piece of latex stretched over a cylinder and held in place with a rubber band. In the right hands, it’ll make every wild turkey sound, from gobbles to kee kee runs—and with unmatched volume.

These boxlike friction calls aren’t so much less familiar as they are less used, especially by veterans who disparage them as the choice of newbies. But with the simple push of a striker rod, they put out distinctive clucks, putts, and yelps. Some can be mounted to a shotgun.