Waiting for Tom: How to Ambush the Toughest Gobblers

Waiting out a tom from a blind isn't the most exciting way to hunt turkeys, but sometimes it's the most effective 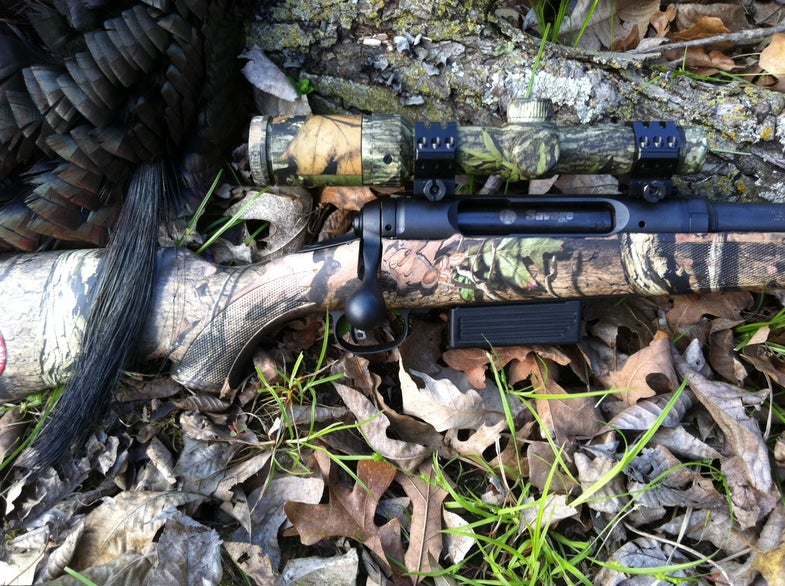 We guessed the first buck at three years old. He was feeding his way toward a group of does and yearlings that were munching right out in front of our blind. Then their heads all snapped up, and the small herd trotted off to our right—pulling a buck we hadn’t seen into view. He stopped broadside, perfectly centered in the open window, his back swayed and belly sagging. This was a four- or five-year-old—a shooter for sure.

Only it wasn’t deer season. You could tell by the velvet covering on the big buck’s budding antlers; and by the greening foliage on the trees; and by the turkeys that had gobbled strong on the roost but had since shut up.
Otherwise—sitting in a blind and watching a field—it felt a lot like fall.

I was hunting with Woody Outfitters in Garnett, Kansas, just a couple weeks ago. Prior to the trip, I got an email from owner Mike Burns, who said we might sit in a blind or two, but that there would be plenty of opportunity to run and gun. I was amped for the latter.

The turkeys, it turned out, were not amped for much of anything. Arriving at camp, a group of fellow writers and I got word that the birds were gobbling on the roost a little, but then flying down, shutting up, and either vanishing altogether or showing up sooner or later at Burns’ small food plots—where the blinds were. In other words, we’d be sitting, not running.

I don’t love hunting turkeys out of a blind. I get all the waiting I can handle during deer season, and the chance to roam the woods is one of things I like best about turkey season. Plus after a long North Country winter—during which I eat mostly potatoes—I need the exercise.

But I will say this: Blinds work.

“I swear I hear a tom drumming,” whispered my guide, Mick Bowman. To be frank, I would usually rather not hunt with a guide. But in this case, while just hanging out in a tent, I was happy to have the company—and Mick was good company.

I gave him a reassuring nod, but I was actually thinking, “Sure you do, Mick.” But then I heard it, too, right behind us. If it hadn’t been for the nylon wall at our backs, the bird would have been flopping already. I just needed a little more patience, something I don’t have much of for turkeys. After 10 long minutes, three hens popped out of woods edge to my right and filed into the plot. Finally the gobbler, bringing up the rear in full strut, came twirling into the open.

I tracked the bird’s head with the scope, waiting for him to un-puff himself, but meanwhile the hens had closed to within 5 yards and were getting antsy. Mick said “Shoot!” and we paced exactly 25 yards to pick up the 2-year-old tom and sling him over a shoulder.

The author (left) admiring the copper-frindged tail feathers of his first bird, an eastern/rio hybrid; Mike Mattly with his longbeard

We tried to strike birds after the morning hunts, but for the most part it wasn’t happening. The one place where Mike Mattly of Back 40 PR and I did spot a couple of late-morning strutters—two days in a row—was right in front on an unoccupied blind. In other words, somebody needed to be sitting there. On the third morning, Burns climbed into that pop-up with Vista Ourdoors’ Jake Edson, who put a big three-year-old tom on the ground before the sun got over the trees.

Burns drove Mattly and I back to that same spot for the evening hunt. Getting out of the truck, I half-joked, “Two to one there’s already a big tom strutting in front of the blind.”

“If you spook him,” said a friend of Burns’s along for the ride, “just get in the blind. They’ll be back in an hour.”

Sure enough: There was a tom and two hens near the blind; we did spook them; and about hour later, they worked their way back. The hens walked in like nothing had happened. The tom was all fits and starts. It took him a full half hour to cross the small plot, but he did, and Mattly dumped him.

My second tom didn’t make a sound on the roost, or at any time during the first hour of light. This time Burns, Mattly, and I were all crammed into one blind, watching another small plot, framed in wildflowers. At some point, enough time had passed since I’d last heard myself call in vain that I was willing to do it again—and a gobbler roared back, close. First came three hens, picking their way through a yellow carpet of squawweed spreading under the hickories. They crossed into the plot and scooted to within feet of the blind, where they settled in to scratch and peck at the clover.

The gobbler circled and hung up just off the plot’s edge. For five minutes we couldn’t see him at all, until Mattly spotted the top of his fan spinning behind a tall screen of prairie phlox. Finally, the tom pushed through the purple blooms and strutted into the long bars of sunlight reaching across the field. When the bird got to 18 yards, Burns whispered, “I’ll make him stick his head up.” He began what I’m sure would have been a string six or seven excited yelps. But on the third one, I shot the full-strut bird in the face.

What can I tell you? The tom’s head was perfectly framed in the scope’s reticle, and I didn’t feel like waiting any longer. He hit the dirt under a cloud of feathers and never moved. Of course, I caught flack from Burns and Mattly for the rest of day. Maybe I’m not so keen on having company in a turkey blind after all. Either way, I couldn’t argue with the results. I think our group killed eight toms in three days, all but one from a blind.
So much for exercise.

I was shooting a special-order, bolt-action shotgun from Savage Arms. Basically, it’s their popular Model 212 slug gun with AccuTrigger, but with a shotgun barrel that’s threaded for chokes. If there were such a thing as a dedicated turkey rifle, this is what it would look and shoot like. On top was a Weaver KASPA 1-4x24mm scope with VZT turkey reticle, which I absolutely loved. At most ranges, you just frame the bird’s head in the center oval—the bigger one for shorter shots, the smaller for longer, the x for long—and pull the trigger. I loaded the rig with Federal’s new 3rd Degree turkey loads. It proved a pretty deadly combination.