Patterning a wall-hanger whitetail is never simpler than it is right now. 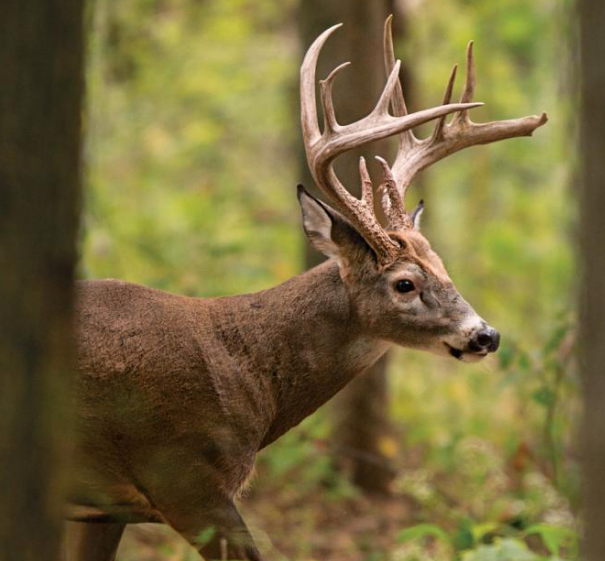 Kentucky’s archery season always opens the first Saturday in September, and by then, bucks are on the brink of shedding their velvet. After they shed, they go into seclusion—sometimes for 24 hours, sometimes for as long as two weeks. That’s exactly when Harry Pozniak likes to hunt them. “They start acting like bucks again,” he says. “They hang back in the hardwoods close to their beds, and head to the fields after dark. But this is still the easiest time to kill a good one.”

Most hunters are conservative in the early season—you have all year, after all. Not Pozniak. “The deer haven’t been hunted in a year, and the foliage lets you sneak in close,” he says. “It’s a great time to be aggressive and hunt right next to their beds.”

Pinning down a bedding area in thick timber can be challenging, but the good news is, bachelor groups have preferred spots they use year after year. “Once you pinpoint where a group of bucks is using the timber, you can pretty well count on new bucks being in the same spot every season,” Pozniak says.

Knowing that, he begins setting his trap in late summer, scattering shelled corn (legal in Kentucky) within 100 yards of known bedding areas. “I keep a camera right over the corn for inventory,” he says. “Does and young bucks will walk right into the bait, but a mature buck will almost always circle it to scent-check for danger and other deer. That’s where you set up to kill him—where he’s making that circle.”

Whereas a rutting buck may run haphazardly across a hardwood ridge, September deer seem to stick right on the best trails, Pozniak says. “I hang a couple of cameras on worn trails 50 to 100 yards from the bait, on the predominant downwind side. I only need a photo or two of the buck to figure out which trail he prefers to make his circle. Once I know that, I know where to sit.”

Pozniak has been hunting and guiding on his land for years, so many of his stands are already in place. But for newer setups, he often depends on ground blinds. “Set them up a month ahead of time, brush them in a bit, and leave the same shooting window open at all times,” he says. “It’s deadly.” —Will Brantley

Big-easy bonus tip: “I don’t use feeders because mature bucks usually won’t come near them. I don’t put corn in a pile, either. I scatter it over a 50-yard stretch so they have to stay on the move looking for it.”

An old buck eases through the hardwoods. Photography by Lance Krueger

Chris Jorde patterns big bucks on field edges, but that’s not where he prefers to hunt them. “The odds of getting busted by other deer before your target buck shows are just too high on a field,” he says. “So once I learn where a good deer is entering a field, I use aerial maps and my knowledge of the land to pinpoint where he’s bedding. Then I can usually find his staging area. That’s the best place to kill him.”

Many staging areas are just 50 to 60 yards off the field, according to Jorde. If the buck has shed his velvet, fresh rubs will often give these spots away. Otherwise, look for big tracks and droppings. Some staging areas are productive every year, but just as many change from one season to the next. Jorde hangs a couple of lock-on stands—for multiple wind -directions—as soon as he finds the sign.

“In a staging area, you’re dealing with one deer and better shooting light,” Jorde says. “We had a buck a few years ago that was hitting the field with about five minutes of light left. We found his staging area and killed him two hours before dark. That’s how long they can linger in the brush.” —Scott Bestul

Whitetails have preferred feeding locations in every field.

“We kill 70 percent of our early-season bucks from ground blinds, and most of our shots are at 20 yards or less,” says Ed Koger. “The only way to set up a shot like that is to know as much about your buck as possible.”

Koger gathers that knowledge with intense trail-camera scouting. He hangs his first cameras around July 10 on trails leading to cropfields or protein feeders (legal in Kansas). “You can’t nail down a buck’s pattern with one or two camera sets,” he says. “So I move mine every week to a new trail. I just go around the compass; if I start on the north side of a field, the next setup is on the east, then the south, and finally the west. Eventually I can determine how a buck enters and leaves the feed, and also what his personality is like.”

Cautious bucks—whether they’re subordinate or just shy—-require setting up blinds well in advance and carefully brushing them in. Other bucks don’t seem to care. “Even some huge, old trophies are more relaxed. One of the biggest bucks we’ve killed here was one we called ‘Forest.’ We watched him for three seasons without hunting him, and he followed the same basic pattern each year,” Koger says. “He’d bed in a grassy area, get up and walk along a creek, pass a grove of trees, and head out to feed, all in daylight. The fourth season, when he was over 200, we stuck out a ground blind and shot him the first night.” —S.B.

Big north-country bucks in Neil Johnson’s area pile into sprawling pea and alfalfa fields in late summer. Johnson does most of his scouting from afar through a spotting scope, which allows him to judge antler size and figure out exactly where the bucks prefer to feed.

Bachelor groups may appear anywhere on such huge fields, and not always near a good tree for a stand. But they frequently will hit the same areas to feed. “Once they find a spot they like, they’ll keep coming back to it, like a flock of geese,” Johnson says.

Low spots, shielded from roads and full of new, green plants, are always a favorite. If they are situated near a good stand tree, great. If not, Johnson creates the sweet spot himself by fertilizing a small section of the field, near some good trees, with a hand-cranked broadcast spreader. “I like to visit the local elevator for a fertilizer recommendation,” he says, “but if I can’t, I just go with 19-19-19. Alfalfa and clover seem to really bene-fit from that.”

Johnson likes to set his stands in conifer trees, but poplars are often the only option. “When we have to set up in a poplar, I hang the stand 12 to 14 feet high and take advantage of the foliage behind it. I bring hunters in and out on a quad, and we don’t talk until we’re in the truck. I’d rather have someone shoot off a rifle than talk in the field; nothing spooks a buck more.” —S.B.

Big-easy bonus tip: “A buck may get up to feed anytime on a cool, rainy day. I don’t want that. I prefer bright sun and high pressure because that keeps him bedded all day—and eager to hit the feed at dusk.”

When the Wyoming bow season opens on the first of September, bucks are generally beginning to shed their velvet, and the first acorns are falling. “The deer you’ve watched feeding in open hayfields all summer suddenly seem to disappear,” says Jeff Smith.

For that reason, the hunting is often better later in the month, around Sept. 20. “They’ve usually reverted back to a summer pattern by then,” he notes, “but the acorns are really falling, too. They’ll stall up on oaks and not get to the hayfields until 10:30 at night.”

An oak grove out here may just be five trees in a fencerow, and Smith says bucks routinely cross a mile of wide open prairie to get to them. With a spotting scope, that pattern is easy to see. He sets up stands in the only trees around.

“Some of our stands look like they’re set in the middle of nothing,” Smith says. “But the bucks have learned to use the open terrain because that’s exactly where nobody bothers them.”

The success rate at these oak stands is as high in the mornings as it is in the evenings. “The deer are on the hayfields before daylight, sometimes a mile away, so we can drop a hunter off without bumping anything,” Smith says. When a good buck swings by the oaks on the way to bed, his client is waiting. —W.B.

Big-easy bonus tip: “Big Western bucks will jump the string just as fast as an Eastern whitetail. All sorts of preda­tors, including mountain lions, keep them on edge. Your best odds at killing them are inside 30 yards.”