A mudflat, a dozen teal decoys, and a September cold front are all you really need to welcome back duck season in a big way. 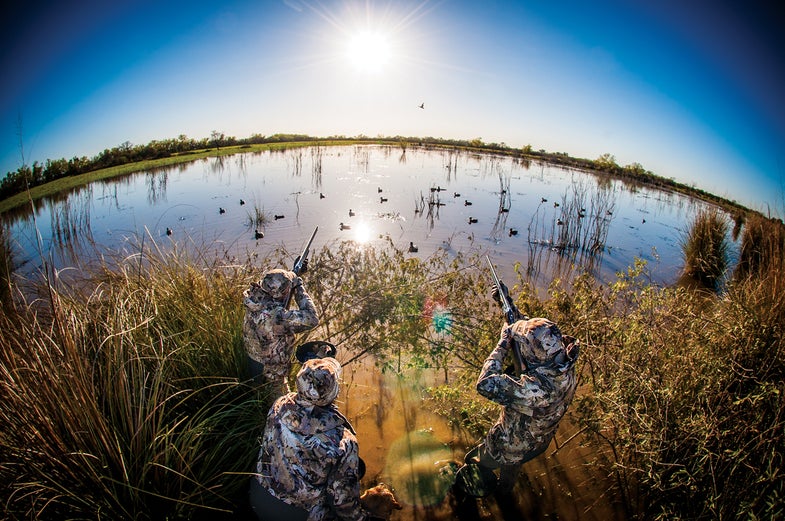 A perfect storm for September teal needn’t be much of a storm at all. This one simply brought an inch of needed rain and a taste of fall when it dropped daytime highs from near 90 degrees into the 70s.

I went scouting the next day, a week before the teal opener, and I saw the first flock before I even stopped the truck. They’re mostly brown this time of year, save for the chalk-blue speculums that always betray. The flock alit with what must’ve been a thousand more ducks standing on the mudflat. It was a veritable bluewing buffet. As a river-fed reservoir recedes after a long, dry summer, mud shorelines are exposed, and they’re teeming with vegetation, seeds, and invertebrates. The mud is sticky and pungent; a rich blend of decaying milfoil, fish and, if you’re lucky, duck droppings.

Bluewings are apt to leave at the slightest weather change, so I checked on them three more times before opening morning, like a new parent watching a baby sleep. They were there each time, and I also noticed a big, grassy island in the middle of their favored flat—the perfect place to hide.

The only problem I could foresee was the popularity of this hunting spot. I knew we’d have some competition.

By 2:30 a.m., I have the boat ready, and my buddies Tim and Ryan and I are leaving town, determined to be the first to the field. We’ve been called crazy for getting started at this hour. But to us, “crazy” is losing the best spot because you wanted an extra hour of sleep.

It’s a short boat ride to the grass island, and we have minimal gear to carry. In the tall island grass, a folding stool and camo shirt provide plenty of concealment. I wear hip boots, but there’ve been hunts when shorts and Crocs were sufficient. There’s not much to the decoy spread, either. I have a dozen Texas-rigged GHG Early Season teal decoys. (You can get the same eclipse-plumage effect by using a dozen mallard hen decoys.) I stand in one spot and chuck the decoys out into two groups, with a 10-yard-wide landing space between them, 15 steps from our hide in the island grass. Tim grunts a nod of approval and stakes out a Mojo Dove in the landing zone. Given the choice between the wing spinner and standard blocks for teal hunting, I’d take the spinner. While I now have a Mojo Teal that looks better in photos than the odd-bird-out dove, I can’t tell that it makes any difference to the live ducks. They love that dove.

We drink coffee in the dark for 30 minutes before the next truck pulls up to the boat launch. A two-stroke outboard gurgles to a start, and soon the boat is bobbing toward us. We shine a flashlight from our hide and listen to muffled cussing as the boat redirects its course to another spot.

Two more sets of headlights pull to a stop at the ramp, and soon, another vessel—this one propelled by a mud motor—is on the way. We shine our light, but they keep coming, finally gliding to a stop outside our decoys.

“We’ve already got this spot, guys,” I yell at them.

I hear a reply in the dark: “Dammit, is that you, Brantley?”

It’s two of our buddies, Danny and Dan. We joke that we’ll whip their asses if they come up here, but at the same time we’re clearing out room for them on the grass island.

“I’ve been watching these ducks for a week,” Dan says as they settle in. “There’s been a bunch of them. I’m glad we don’t have to fistfight a bunch of rednecks for this spot.”

Half a dozen more boats motor by us, and then, during the 30 minutes before shooting light, all goes quiet.

A bluewing hen quack is unmistakable—it has a fast rhythm and is at once high-pitched and raspy, like a sarcastic laugh. Ducks are splashing amid our decoys as the sky lightens, and several hens are quacking together. The birds in the spread flush before the legal minute, but that gives us just a bit of extra light before the next flock—at least a dozen birds—roars in from behind us, just a few feet over our heads. We hit them with teal quacks of our own. They bank sharply out front before swarming around the motorized dove. Tim fires the first shot and drops two. The flock knots together and springs skyward. We all come up shooting and kill seven total. Tim nails two more—his limit of four in three shots.

“I guess I’m done,” he says, casing his shotgun. There’s no time to feel sorry for him, because the next flock is bearing down fast. Within 20 minutes, we’re all casing our guns and gathering 23⁄4-inch hulls. Teal are still buzzing past our heads as we gather up the dead ducks and decoys and take pictures.

The air becomes a little unsettled later that morning, and by the afternoon, a stiff breeze is blowing. Another front is brewing. I pull up to the ramp just before sunset with binoculars, thinking of hunting the mudflat again the next morning. There are plenty of feathers washed against the grass island.

But there’s not a teal in sight. perfect storm for September teal needn’t be much of a storm at all. This one simply brought an inch of needed rain and a taste of fall when it dropped daytime highs from near 90 degrees into the 70s.

Tip: How to Rig for Shallow Teal

A good teal spot is rarely more than a foot deep. Texas-rigged decoys are the only way to go. You can buy premade rigs (rigemright.com) or make your own by threading one end of a 3-foot length of 600-pound-test monofilament through the decoy keel and crimping in a 2-inch loop. Thread the opposite end through a 3- to 4-ounce egg sinker, then crimp in another loop at that end. Roll the lines into a ring and secure them with a carabiner. A dozen decoys rigged this way can be set, and picked up, in minutes. —W.B.