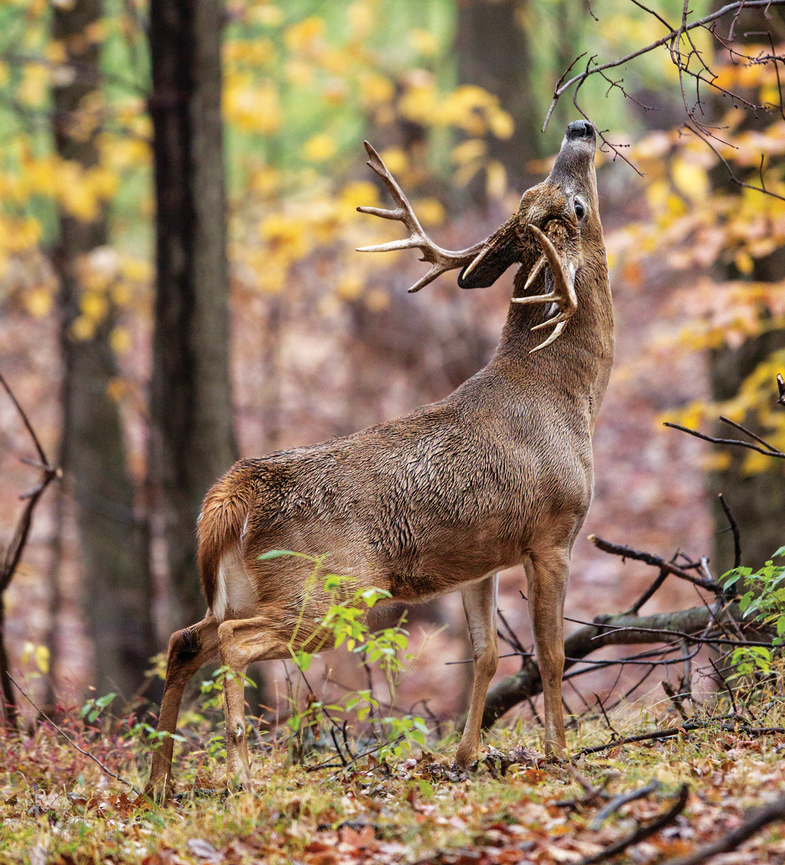 Your bow season just opened. It’s time to make a fake scrape and lure in a buck. By Scott Bestul

Scrapes and the month of November go together like ice cream and cones. As the rut builds, bucks will open scrapes, advertising their presence to does—and of course to deer hunters, who will make fake scrapes of their own to lure in a jealous buck.

But it’s a little-known fact that whitetails visit scrapes every month of the year. You can use scrapes as a hunting tool at the season opener just as effectively as you can during the peak of the rut. Here are three methods to get started on mocks as soon as your season opens.

Mock scrapes are my favorite spots for hanging trail cams once bucks shed their velvet. For starters, I collect a higher percentage of buck photos than I would at a food source or mineral lick, since fewer does and fawns visit scrapes right now. Second, as bachelor groups break up, bucks check fresh scrapes to see who’s new in their neighborhood. My best mocks are usually situated near natural food sources (acorns, apples, etc.) and/or food plots and ag fields. I look for an entry trail into a field, then walk back in the timber 40–50 yards and create one to three mock scrapes. My cameras start shooting bucks within a day or two.

I’ve had great success by faking a scrape close to an existing one. As I scout for the top food sources and most active trails this month, I’ll keep an eye out for the sign. When I find one, I create two or three mocks in the immediate area. I call this blowing up a scrape, because virtually every time I make these mocks, it leads to a flurry of scraping activity in the area. I feel that early scrapes are typically opened by one or two dominant bucks, and when those deer find fresh scrapes that they didn’t construct, it punches their dominance and curiosity buttons. Blowing up a scrape is an awesome way to create a great stand site or trail-cam setup.

Besides drawing a buck to your stand, mock scrapes can also position him for a shot. Wisconsin whitetail hunting expert Jeff Below makes three quick mock scrapes every time he hangs a stand, even if he intends to hunt the spot just once. “I use my boot to kick up three mocks in a rough semicircle upwind of my stand,” he says. “I don’t worry about a licking branch at all. I just want the sight and smell of that bare dirt out there when a buck comes in. I can’t count how many bucks I’ve sucked in with those scrapes. And when they approach, they’re not only upwind, but their nose is to the ground and they’re in bow range. It doesn’t get much better than that.”

1. Place an unusual, but unthreatening, item in your shooting lane, such as a bucket or some marking flags. Make sure the item has no human scent.

2. Spray doe urine on the fletching of an arrow, screw in a field tip, and shoot it into the ground where you want the deer to walk.

3. If your state regulations allow, take an apple to your stand, enjoy a couple of bites, and then toss the core into an open area.

4. Attach a string to a tail from one of last season’s whitetails and hang it from a branch so that it dangles about 4 feet from the ground.

GEAR: Get Your Heads Examined

Are your broadheads ready to hunt with right out of the package? Here’s how to tell. By Will Brantley

Bad broadhead flight is usually a bow-tuning issue—but not always. Last fall, for example, I opened a package of broadheads and had to peel shards of metal out of the ferrules. Sometimes, accuracy problems can be traced to the broadhead itself, says Danny Hinton, owner of Hinton Archery (hintonarchery.com) in Murray, Ky. Here are five things he does before hunting with any heads.

Weigh Them
“We had a guy who was having problems tuning 100-grain broadheads, and when we put them on a scale, we found out why,” says Hinton. “The lightest one weighed 83 grains and the heaviest was 103—all from the same pack. A difference of 2 or 3 grains per head won’t cause any problems, but much more than that will.”

Spin Them
“You don’t need a fancy spin tester. Just put the broadhead on your arrow, lay a hardback book on a table, and slowly roll the shaft back and forth across it. If the broadhead looks like it’s wobbling, something’s not straight.”

Check the O‑rings
“Most mechanical heads use O-rings, and I’ve seen them dry-rotted straight out of the package. Bad gaskets can cause blades to open during flight, and that’ll ruin accuracy. Check them frequently, and if there’s any doubt, replace them.”

Test for Sharpness
“You should be afraid of touching your broadheads with a bare hand. One good, safe test for sharpness is to stretch a rubber band so that it’s just taut between your fingers and touch a blade to it. If the blade is sharp, the band will instantly break. If you have to saw on it, it’s not sharp enough.”

Shoot Them
“The last thing to do is shoot your heads to test their accuracy, and don’t just use the blunt practice blades at 20 yards. Use real blades, and shoot them at your maximum range. If you shoot your field tips at 50 yards, shoot your broadheads from there, too. It’s the best way to be sure that your arrows will fly true.”

Prepare your trails for easy travel—for you and deer. By JJ Reich

Crunchy leaves provide the ultimate intruder alarm, and it’s very difficult for a hunter to get into and out of dry hardwoods areas without alerting deer. But that’s not the case for whitetail hunter Ron Bice. He credits all the Pope and Young trophies hanging on his walls to his ability to remain undetected by a deer’s keen ears as he travels to and from his stands. Here’s how he does it.

Several months in advance, to let the deer get used to the change in their environment, rake away dry leaves and dead branches from trails on which you’ll be traveling. Cut down brambles and other tall plants to dirt level. Trim any hanging branches from all the trees or shrubs in your path. Use a chain saw to cut a narrow corridor through fallen logs. Your goal is a clear and clean 16-inch-wide path just big enough for you to slip through the woods without brushing against any vegetation.

Be meticulous. Bice spends a full weekend in late summer, working eight hours each day, to craft his trail network. Then, a few weeks before opening day, he goes back in and quickly touches them up.

During the hunting season, clear the way again after the majority of leaves have fallen from the trees. Bice recommends using a gas-­powered leaf blower. It is noisy but gets the job done quickly, so it’s less intrusive to the area because you are in and out fast.

Consider creating a network of foot trails that will allow access to all of your stands. You’ll be able to rapidly switch stands during your hunt with little noise disturbance—or easily still-hunt throughout your entire hunting area.

A bonus is that deer will use your man-made paths for their own travel. “Some of my trails are now superhighways for deer,” says Bice. “They direct deer right to me.”

Get every one to shoot to the same spot. By Dave Hurteau

Even a dozen brand-new, high-end, correctly spined arrows won’t all hit the same spot out of the box. “Typically, you’ll have four or five that are way off,” says Kris Christensen of Spot Hogg, which makes bow sights and other accessories. The way to fix that is by nock tuning. The most precise method is to use a Hooter Shooter, which some pro shops have. Here’s how he does it (typically taking all shots at 20 yards).

Shoot all of your arrows through the machine to see which group together best. Then take any one of those and shoot it several times to make sure it hits in the exact same hole each time. Assuming that it does, mark it as No. 1.

Now take any other arrow, mark it No. 2, and shoot it through the machine. If it doesn’t hit in the same hole as No. 1, turn the nock slightly and shoot again. Repeat this until it hits the No. 1 hole, or as close as possible. There aren’t any set rules for which way or how much to turn a nock to make certain corrections, but with each setup you can often find a pattern.

Do this for all of the arrows. You may not get all 12 to hit in the same hole, but you can usually get very close. If one or two arrows give you trouble, replace their nocks and try again.
If you don’t have access to a Hooter Shooter, do the same thing by hand. It won’t be as precise, but you’ll still get better groups.

Four ways to remain undetected during the early season. By Scott Bestul

Early-season bucks are infamous for bedding tight to a food source, which makes getting to a nearby stand or blind a tough and risky proposition. Bumping a buck now can put an end to weeks of patterning; he may go nocturnal or simply move to a different area. To avoid busting that buck, follow these four tips for making a covert approach.

Get There Early
September’s lush foliage and dense grass make it easier for a deer to smell your entry trail. Even if you wear rubber boots, the scent of crushed vegetation can alert a buck. But it will fade with the passing minutes, so get to your stand at least two hours ahead of prime time.

Screen Yourself
Mature bucks are expert at using the terrain and vegetation to hide their silhouette as they walk. Mimic them by following a creek bed, ravine, back side of a ridge, or line of dense brush for your approach.

Clip a Path
Don’t hang a stand without clearing a narrow walking path to it. I use a handsaw and pruner to make a shoulder-width trail void of twigs and rocks that can trip me up, as well as clothes-­grabbing vines, brush, and branches.

Alter Your Rhythm
Only humans walk with a steady one-two cadence. Switch up your rhythm and pause frequently, just like a deer, turkey, or squirrel would. Some hunters use a walking stick to create a three-step pattern, and scratch the leafy ground to sound like an animal. I’ve even popped a diaphragm call in my mouth so I can cluck and purr like a turkey as I sneak to my set.