I’ve rattled, grunted, and even decoyed in enough bucks during the early season to recognize that these tactics can work... 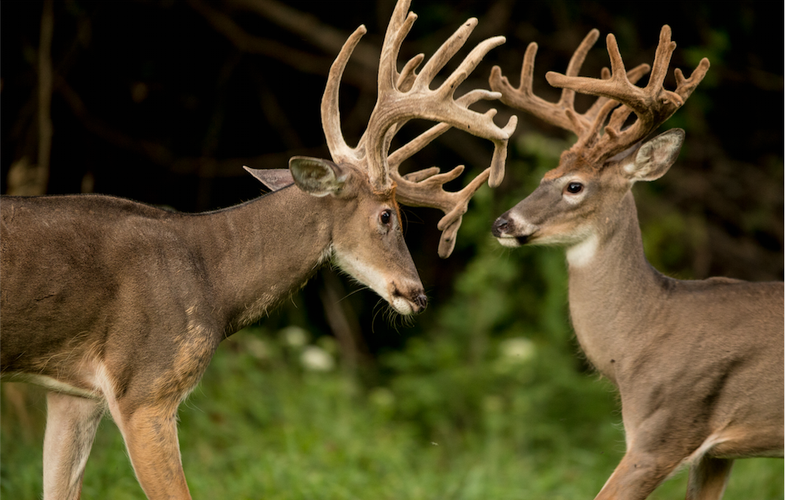 I’ve rattled, grunted, and even decoyed in enough bucks during the early season to recognize that these tactics can work months before the rut. But it’s important to play the aggression card cautiously. Even a buck that totes a monster rack may be a shy or subdominant animal that will run from an encounter with a potential rival. The good news is that you can identify which bucks are vulnerable to aggressive tactics, and which are not, before the season starts. These three clues will tip you off to those bucks that become bullies before any of the rest.

Bachelor-Group In-Fighters vs. Targets
Bucks will sort out pecking order while they’re still in velvet—a time when they are also highly visible, often hitting major feed fields and plots well before dark. It is a perfect opportunity to glass bachelor groups to see how bucks behave toward one another. While they’ll typically protect their vulnerable antlers, bucks will kick, bump, and posture to work out where each stands within the group. The bucks that are always mixing it up and never seem to back down are the ones most likely to come to your early-season calls or rattling antlers. Get their attention, and issue a challenge. Stow your calls, on the other hand, when you encounter the bucks on the receiving end of the bullying.

Pack Leaders vs. Followers
Sometimes, trail-cam photos are more than mere portraits of deer; they can get you inside the head of a buck you’re after. One of the nicest bucks I’ve tagged always seemed to be mugging for the camera, leading and pushing any other bucks out of the way. He also liked to travel in daylight—a classic case of confident ease. He came to a buck decoy and loud grunting in September, and he already had one half of his rack broken off. Conversely, one of the largest bucks my cameras have captured is a veritable wimp; when he appears at a mineral lick or food plot, he’s always in the shadow of other bucks and constantly alert. If I ever encounter him, I’ll put away my calls.

Social Animals vs. Loners
Most whitetails are gregarious. When I encounter a buck that’s consistently alone in the preseason, I immediately sort him into the no-call category. Either he’s been bullied and is avoiding confrontation, or he’s simply a shy recluse who wants to be left alone. Of course, a lot of deer fall between these extremes. They may respond to calling or rattling, depending on their mood at the moment. If you don’t know what kind of buck you’re hunting, start with low-volume calling and look for body language that indicates aggression: a direct stare, raised back hair, or the start of an approach. If you see any hesitation or signs of alarm, back off your calling. The buck may come to a call another day, but not today.