A single camera can locate your buck—if you know how to use it. 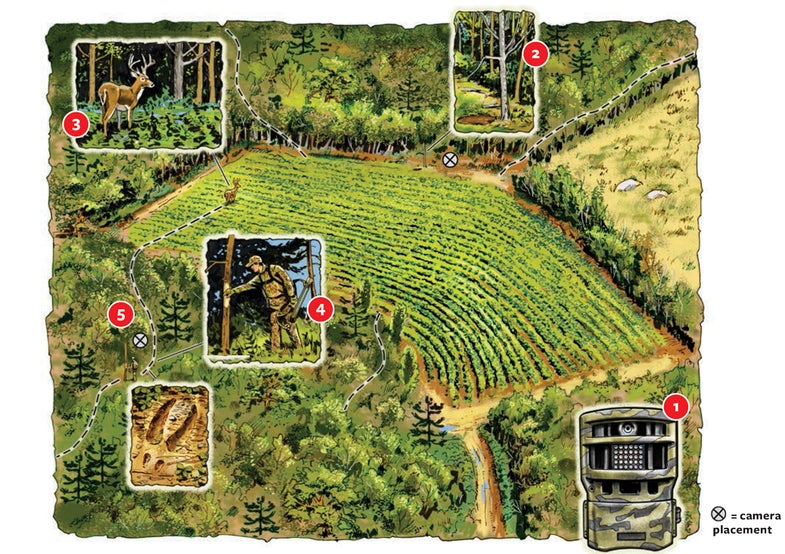 We’d all like battalions of trail cameras at our disposal, just as much as we’d like thousands of dollars in extra cash to buy them. The truth is, a decent camera is expensive, so most hunters own just one or two. You can still pinpoint an early-season buck with a single camera, but you have to be smarter about using it. Follow this five-step strategy.

1. Buy Right
Get a camera that offers as many of these features as possible: hybrid mode (time lapse plus motion detection), video mode, infrared or black flash, panoramic capability, and a fast trigger speed. I personally like the Moultrie Panoramic 150 for all of the above ($240; moultriefeeders.com).

2. Take Inventory
Key food sources like cropfields attract numbers of deer, but you need a specific draw—like a mineral lick or even a mock scrape on the edge—to get a good look at all the players. Set the camera to hybrid mode for this step, and angle it to monitor as much of the field edge as possible. Leave it for at least a week.

4. Get to Know Him
Combine aerial and contour maps with your camera intel to determine likely bedding areas. Then put boots on the ground—­carefully. It’s best to scout at midday by yourself, and remember to keep the wind in your face to help control scent. Early in the season, bucks commonly bed within 100 yards of food sources. Walk the field edge and check primary and secondary trails for sign. You’re looking for big tracks and fresh rubs.

5. Get the Closing Shot
Post the camera on the most promising trail 20 yards from the edge of the field. Put it in video mode to monitor behavioral details, and leave it for three days. If your buck shows up in daylight, hunt him immediately. If he arrives after dark, move farther away from the food. If he doesn’t appear at all, move to the next trail and don’t get discouraged. A buck’s core area is approximately 75 acres in early fall. It may take time to nail him down with just one camera, but when you do, the odds of shooting him are high.