Two buddies set up camp for a D.I.Y. antelope hunt that starts off fast and goes out with a bang 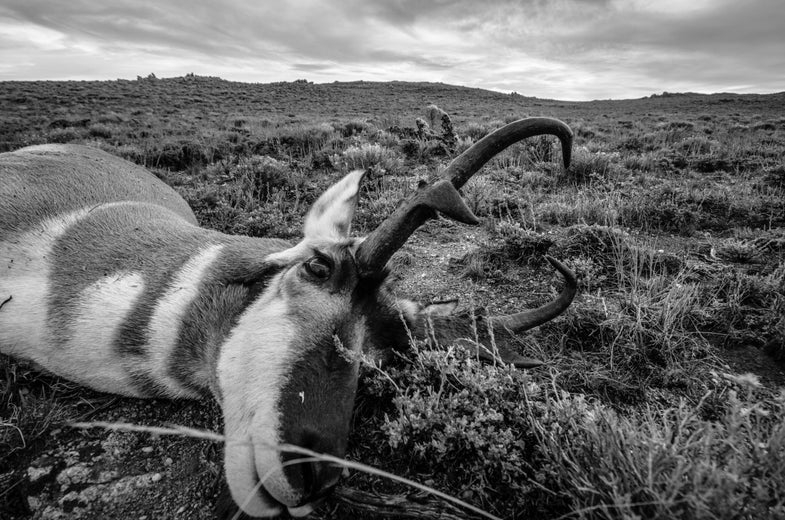 A pronghorn hunt is one of the most exciting—and accessible—big-game adventures in the West. Steven Brutger
SHARE

From a high ridge we scanned the Wyoming plains for black horns. Patches of quartz flashed white under the morning sun, mimicking pronghorn rumps at a glance, and gusts shook our maxed-out views in the spotting scope. Distractions and conditions aside, my buddy Steven Brutger and I had little trouble locating game. A mile and a half north, a buck and a few does grazed a meadow. Stalking the herd would’ve been easy: A cluster of aspens quaked between us, and if we could sneak through the trees we’d have a clear shot. The buck’s rack looked decent in the scope—not a trophy, but respectable. We kept an eye on him while we glassed for something else. Two miles east, another buck busied himself with nine does. I struggled to gauge his size, but he appeared bigger than the other buck. What we could see clearly, though, was the complete lack of cover that stood between him and us.

Read Next: The 11 Best Pronghorn Rifles

I kept going back and forth between the bucks, searching for any clue that would indicate a size advantage but finding none. All I could decipher were the paths to each animal: a high-percentage stalk north to a fine buck versus a stalk east with herd-busting risks at each turn to a potential trophy. What the hell, I thought.

“Let’s try him,” I said. We descended the ridge and headed east.

This hunt was years in the making. I first met Brutger on a business trip in 2010. He works for Trout Unlimited, and I visited his Wyoming home to learn about the conservation projects he was overseeing. We hit it off, and a year later he invited me back to Wyoming for a trout road trip. As we trucked from river to river, we saw hundreds of pronghorns grazing the rolling plains. At the time, my big-game hunting experience had been limited to treestands, and I couldn’t help but imagine the thrill of stalking a pronghorn in such country. “I’d love to hunt one of those,” I told Brutger.

“Maybe that’s our next trip,” he said.

Fast-forward two years: Brutger and I began to get serious about our pronghorn plans. For the Eastern hunter jonesing for a classic Western big-game experience, pronghorns make for a great gateway hunt. You don’t need a guide, and aside from a spotting scope and good binoculars, your deer hunting gear is enough. And in Wyoming especially, public land is plentiful, and tags are not difficult to draw. Brutger and I both scored tags in hunt area 52 near Saratoga—a section known for big public-land bucks. Before I knew it, I was back in Wyoming on another adventure.

The first morning, as we pushed east toward the buck and does, we paused often to glass the animals and plot our next move. We headed toward a small knob that dropped us into a draw, which we crawled through, letting the sagebrush shield us. Grouse flushed around us, and the hot air seemed to thicken the closer we got. We halted at the end of the draw, just before a spot that would leave us completely exposed. Brutger pointed to another small knob 20 yards ahead. We’d have to belly-crawl to it and hope the herd didn’t see us.

Crawling to the knob felt like tiptoeing past your parents’ bedroom after you’ve stayed out past curfew: You move gingerly, with your eyes half shut, as if that’ll make you less noticeable. I knew the herd was to my right and that they’d spot us easily if they turned our way, but I tried not to fret over that for the moment. Instead, I focused only on moving as low and slow as possible. When I reached the knob, I rose to my knees and caught my breath. I wasn’t exhausted as much as I was exhilarated. We’d dodged the trickiest part of the stalk, and now had only a little farther to go.

Brutger and I climbed to the top of the knob and peeked over the crest for a look at the herd—which had vanished. “Where the hell did they go?” I whispered. Brutger guessed they’d dropped below the ridge about 100 yards beyond us. We hurried across the flat toward the rock-piled outcropping where we’d last seen the herd. We looked over a boulder into the opening below—and there they were.

The does were bunched together, while the dominant buck chased away the smaller males. Once he ran off the last of the competition and joined the does, we finally got a good look at him. The length of his horns wasn’t too impressive, but the mass of them looked solid. Those details hardly mattered to me now, though. “We could keep hunting and look for a different buck,” Brutger whispered, then added exactly what I was thinking. “But this has been a good hunt.”

I moved to a flat boulder that gave me a clear vantage. Prone on the rock, I peered into the sight. The herd was only 120 yards away, and two of the does seemed onto me. As the buck ran to shoo off an intruder, the does stared in my direction. The buck returned and stood behind them, which blocked my shot. My legs started to shake, so I braced my feet against a rock. Meanwhile, the does never blinked. They’re gonna leave, I thought. Then the buck began to move. He backed away and turned broadside. My heart hammered the stone underneath my chest, and I swear it beat as loudly as my safety clicking off.

The pronghorn buckled at the crack of my .270, as if the earth beneath him had thundered. The does fled one way and he another. He covered 30 yards before his legs, his body, failed him, and he fell.

I walked over to Brutger, and we shook hands. “Congratulations,” he whispered, as if still not wishing to disrupt the animals, the quiet country, or the moment. There were no hollers or high fives, for which I was thankful. My first pronghorn hunt had ended just as I’d hoped.

Down to the Wire

Filling Brutger’s tag required a bit more work and miles covered. After I shot my buck, we made three stalks—each ending in a bust. Twice we couldn’t get close enough, and once we surprised ourselves, and the pronghorns, by getting too close.

The next morning we executed another long, thrilling stalk. When we reached the last ridge, Brutger had the buck in his scope but couldn’t find a shot he was comfortable taking. We walked back to our tent camp to regroup before the next hunt.

We took the truck to cover more ground, figuring we could leave it behind if we needed to make a long stalk. The first herd we glassed included a buck that, while on the smaller side, was nontypical. Brutger has killed several antelope, but never a nontypical, so this one appealed to him. We parked and began pursuing the freak.

We rushed to a spot where we thought we could intercept the herd. Of course, by the time we arrived they’d already moved past us—but we were close enough to see that there was another buck, and he was a giant. We waited for them to cross a field and go over the ridge, then sprinted toward them. Naturally, we climbed over the top just in time to see that the herd had already crossed another open flat and were about to drop over another ridge. “We’re gonna have to run again,” Brutger said. Once again, we were too slow. When we reached the second ridge, the biggest buck we’d seen all trip was 400-plus yards away and showed no signs of stopping.

“Maybe we should just call it a day,” Brutger said. “Rest up for tomorrow.”

Tired and hungry, I didn’t put up an argument. I should’ve known better than to believe Brutger was ready to quit. The guy is one of the most determined and persistent hunters I know, so when he spotted another herd on the drive back I wasn’t surprised that he braked for a better look.

Brutger gauged where they were headed, so we drove back to the bottom of a mound, then walked to a granite outcropping that overlooked a grassy valley. Just as Brutger had suspected, the buck and does had arrived. They were more than 300 yards away but grazing toward us. Brutger and I hid behind the rocks, hoping the buck would move into range while there was still light in the quickly darkening sky.

Brutger was to my left, while I monitored the herd with my binoculars. When the herd shifted and moved toward my right, I whispered for him to switch spots.

I rose to my knees, my glass glued to the pronghorns—which I saw were eyeing me, too. I dropped behind a rock, fearing the worst: I had busted the hunt we’d come so close to finishing. My thoughts stumbled through an apology to Brutger but were interrupted by a gunshot. I popped up for a look. The does hurried away, but I didn’t see the buck. “Where’d he go?” I asked.

The bullet traveled about 150 yards before it tore through the buck’s heart on its exit route through the right shoulder. The animal collapsed on the spot. Brutger lifted the buck’s horns. “I really enjoy the satisfaction of a well-placed shot,” he said. He wasn’t bragging. His words were simply genuine, from a hunter who appreciates a hard, honest chase.

As we drove to camp, the dead buck’s musk had already seeped into the truck’s front seats, and the evening’s first stars poked through the navy sky. Brutger and I made the most of our last night. We built a roaring fire. We cooked antelope quesadillas. And we retold stories of past trips and relived memories of this adventure, now nearing its end. During one of those moments when your eyes relax in a fire’s whipping flames and you almost forget how to speak, my mind raced for a new excuse to return to Wyoming.

“How about elk next?” I said. Brutger took a swig from his drink, and grinned at the fire.

This story was originally published in October 2015.