A South Dakota farm family has learned how to run a successful, profitable ag operation and simultaneously create near-perfect habitat for ringnecks. Is this the future of pheasants? 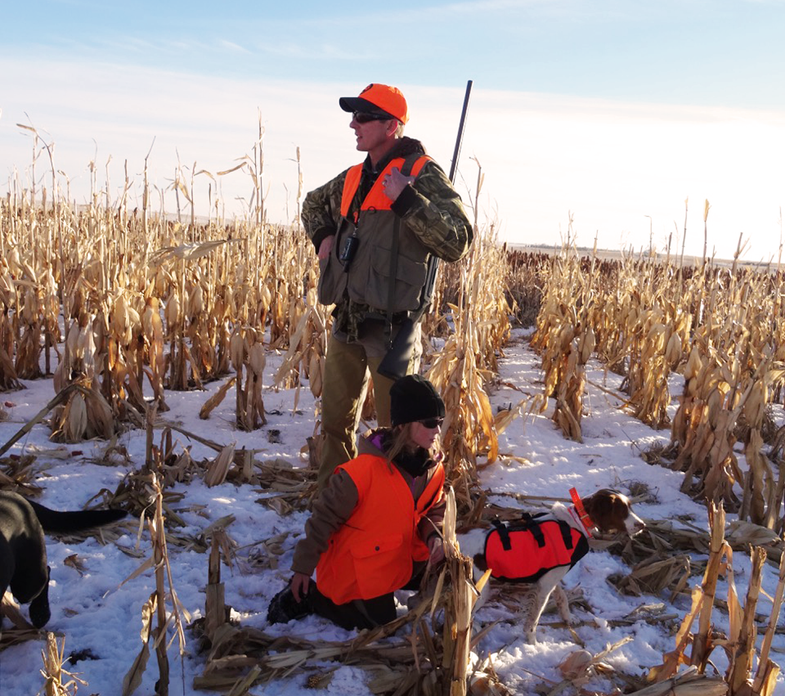 Stemler’s husband, daughter, and their Brittany wait in the cornfield for other hunters to move into position. Photograph by Jodi Stemler.

As the blockers moved to the far end of the field, a cackle announced the flush of a rooster pheasant. Then we heard a whoosh of wings as a dozen more birds broke from the field edges. We quickly loaded our shotguns, turned the dogs loose, and moved into position, hoping the field was holding a few more birds. Just then an explosion to my right signaled another rooster bursting from the waist-high sorghum, followed closely by several hens. Within seconds it was chaos, with birds breaking well in front of our phalanx of a dozen hunters.

For the next 30 minutes, pheasants busted out of the cover, rising quickly into the crisp, clear December South Dakota sky. As the calls of “Rooster!” and gunshots filled the air, the dogs raced forward to retrieve the down birds…and yet the pheasants kept coming. Never before had I seen so many wild pheasants. Later, we estimated that at least 500 birds flew out of that one field alone.

Hunters move through a field of corn bordering a strip of sorghum. The mix provides excellent cover and food for pheasants, as well as profitable harvests. Photograph by Jodi Stemler.

We were hunting on Johannsen Farms, in tiny Tolstoy, South Dakota, as guests of Pheasants Forever and HuntFishSD.com. Our group was a mix of writers from outdoor and agricultural publications and mid-western newspapers. I was also lucky enough to bring along my husband and 9-year-old daughter. The point was to see first-hand how private-land habitat conservation works hand-in-hand with pheasant hunting in South Dakota. That one field easily told the entire story—the connection between habitat conservation programs and great hunting was smack-your-head obvious.

A pheasant nest in a no-till field on Johannsen Farms that grew wheat in 2013 and corn in 2014.

Since the middle of the last century, South Dakota has been home to an average of about 10 million wild ring-necked pheasants. The birds thrive in the mosaic of grasslands and agricultural lands found mostly in the eastern half of the state. In a typical year, hunters harvest more than a million birds, making it a top pheasant-hunting destination. But changes in agriculture and a series of bad winters and cold, wet springs took their toll on pheasant populations in 2013.

Agriculture is king in most Midwest states, and the best pheasant hunting can be found on working landscapes with a mixture of crops, grassy edges and native grass fields. The recent drops in the pheasant population stemmed largely from conversion of grasslands to crops and fencerow-to-fencerow planting. But all working landscapes are not created equal when it comes to producing pheasants and crops together. Such a win-win is possible, but it takes knowledge, vision, and planning – and, most importantly, willing and innovative landowners.

If you’re an upland hunter, you probably know about the Farm Bill’s Conservation Reserve Program (CRP), which pays farmers to take marginal croplands out of production, thus creating nesting and thermal cover for birds. But in recent years, as commodity prices skyrocketed, farmers have taken more and more acres out of the CRP program. Additionally, the reauthorization of the Farm Bill in 2014 resulted in a 24-million-acre cap on CRP – a decrease of 8 million acres. The question remains whether the drop in CRP acreage will impact upland bird numbers, or if it will lead to more strategic conservation efforts by federal agencies such as the Farm Services Agency and the Natural Resources Conservation Service as well as state fish and wildlife agencies.

_ Dozens of pheasants flushed every time the hunters moved forward in the field. Photograph by Johannsen Farms._

During our South Dakota hunt, we flushed close to a thousand wild birds in just three fields, so clearly Johannsen Farms is doing something right. But it might surprise you to know that of the farm’s 6,000-plus acres, only 300 acres are enrolled in CRP. The farm grazes about 900 acres of native prairie, and crops about 5,000. Strategically enrolled CRP acres help, but clearly the birds are benefiting from other creative conservation practices and programs in which Johannsen Farms participates.

For instance, the Johannsens have used funding through the Farm Bill’s Environmental Quality Incentives Program (EQIP) to implement an intensive rotational grazing program to maintain native prairie grasses. Their cattle are thriving, and the grasses and perennial flowers provide top quality pheasant nesting and brood rearing habitat. They till around the prairie potholes to protect these ephemeral wetlands – some of the best duck nesting habitat in the continent – and they don’t plant to the fencerows, because these marginal areas don’t produce the best quality crops anyway.

Through the Conservation Stewardship Program (CSP), the Johannsens plant a diverse cover crop mix of legumes, cereal grains and tubers into their wheat stubble right after summer harvest to get 60 days of growth before a killing frost. The cover crops enhance the health of their soils, significantly increasing the nitrogen available to crops and reducing the need for commercial fertilizers. These cover crops also provide fall grazing opportunities for their beef herd – and the wildlife loves it too.

“We have harvested pheasants in December, with six inches of snow on the ground, that have had green leaves in their crops,” says Eric Johannsen. “The white-tailed deer also absolutely love grazing these green cover crops in the fall.” The Johannsens’ lodge walls are covered with photographs of monster bucks seen on their property.

Johannsen and his brother Corey are fourth generation farmers on property that their great-grandparents settled in 1926. The brothers both have their degree in agricultural business from South Dakota State University – Corey focuses on the sustainable agriculture production and soil health, while Eric focuses on sustainably managing their beef cattle, grazing lands and wildlife habitat. They joke how their parents, Karl and Connie, weren’t quite as sure about the changes the brothers implemented. However, the benefits of these sustainable practices are paying off – the overall goal for the Johannsen family is to consistently stay profitable as an agriculture producer, and EQIP and CSP are making that possible.

Like many of you, I read Phil Bourjaily’s excellent article, “Silent Fields: Where Have all the Pheasants Gone?” The piece examines the reasons behinds the startling drop in the pheasant population in the central U.S., and how that drop has resulted in thousands of hunters no longer bothering to go afield after the birds. There is no doubt that there has been dramatic alteration to ag landscapes in recent years, decreasing pheasant habitat. But farmers like the Johannsens are making a difference, and the working lands programs in the new Farm Bill are helping. When they’re applied properly, working lands conservation programs benefit the production side of an agricultural operation, and also benefit wildlife on the ground.

Pheasants need that mosaic of agricultural lands and grasslands, so maximizing the value of the various set-aside and working lands programs in the Farm Bill can pay dividends for the birds. The great thing about pheasants is that they are almost like an annual crop – give them food, water, thermal cover and places to raise their chicks, and populations can and will rebound.

Stemler handles her dog as it recovers a downed pheasant. Photograph by Johannsen Farms.

Johannsen Farms worked closely with Pheasants Forever Farm Bill biologists and the Natural Resources Conservation Service to understand how Farm Bill conservation programs could benefit the farm and boost pheasant populations. These on-the-ground technical service providers can help landowners find and implement the programs that will work best for their operation.

A new publication from Pheasants Forever, the Association of Fish and Wildlife Agencies, The Nature Conservancy and others within the North American Bird Conservation Initiative’s Private Lands Subcommittee provides a tool for understanding the programs and building relationships with private landowners. The 2014 Farm Bill Field Guide to Fish and Wildlife Conservation describes all of the Farm Bill conservation programs in detail and spotlights different landowners who are implementing good conservation practices on the ground. Give it a read to get more information about how all of the Farm Bill programs can be used to improve fish and wildlife conservation.

The author and her daughter after their incredible day of hunting on Johannsen Farms. Photograph by Anthony Hauck, Pheasants Forever.

Jodi Stemler is President of Jodi Stemler Consulting and has 20 years of experience in the natural resource conservation field working for a state fish and wildlife agency as well as non-profit conservation organizations in Washington, D.C. Stemler lives in Denver, Colorado with her husband and daughter.