Call a Bear Into Your Lap

Just seeing a black bear in the wilderness is exciting, but when a beady-eyed bruin busts from the brush looking... 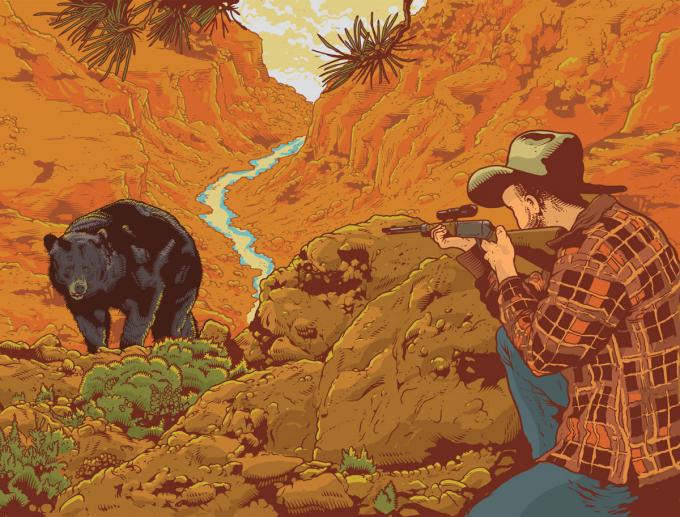 Just seeing a black bear in the wilderness is exciting, but when a beady-eyed bruin busts from the brush looking at you like you’re covered in honey, well, that does something to your soul. Here’s how to bring an apex predator into range by pretending you are prey.

Read the Sign
Cold calling rarely works, so spend some time scouting for sign. Grassy flats and oak groves are a few of the fall food sources ­canyon-​country bears prefer. In the dry Southwest, water is also key. Look for fresh sign near creeks, seeps, and other wet areas.

Watch Your Back
Find a spot downwind of cover. Bruins don’t have great vision but do have a keen sense of smell. Elevation and clear shooting lanes will let you get a glimpse of approaching bears. Hunt with a partner or get comfortable in the rimrock to prevent bears from sneaking in behind you.

It’s a Scream
Blow a rabbit distress call, starting at a low volume, but ramping up quickly to pull bears from up to a mile away. Bears have short attention spans and come in slowly. Prepare to call nonstop and spend 45 minutes to an hour on each stand before moving a short distance and setting up again.

Pick Your Shot
A big boar isn’t as wary as a fox or coyote, so you should have time to take a good shot. You don’t want to track a wounded bear in thick cover. Aim midway up the front shoulder, which will put the bear down fast. Of course, if he appears out of nowhere and in your lap, you may have to shoot in self-defense.

Must-Have Gear
Save your lungs with an e-caller like the FoxPro Fusion ($500; go​fox​pro.com). Dual speakers deliver a range of realistic sounds, from elk calf bleats to deep bear growls, and the easy-to-use remote lets you control volume and sounds without the bear focusing on your movement. Just make sure e-callers are legal where you hunt.

How to be BFFs with Your Horse

★ Horses are large, powerful creatures that were domesticated 5,000 years ago but have remained unpredictable ever since. Their brains are crammed with things we don’t understand, such as “intuition” and “survival instinct.” If you are going to ride a horse on a hunting trip, you need to know a few things.

➞ If you’re jumpy or scared, your horse will tend to be jumpy and scared. Your voice and movements should be calm, yet deliberate. On most trips, you could sit in the saddle like an armless, legless trunk of a man and you would arrive safely at your destination. So chill.
➞ Always mount and dismount on the animal’s left side. No one knows why or what happens if you don’t. You don’t want to be the guy to find out.
➞ You can rub your legs raw if your pants don’t fit right, so consider wearing panty hose beneath your trousers. These are like WD-40 for your legs. Fight the temptation to cut off the feet.
➞ Horses don’t like surprises. They will sometimes spook at butterflies. An airborne jacket is, to a horse, an entire horror movie compressed into four seconds. For this reason, never toss anything to another person. Hand it to him.
➞ Horses can sleep standing up. If the first thing it feels upon waking is your foot in the stirrup, it will mistake you for a predator and bolt. This can be fun to watch if it’s not happening to you. Always approach from the side and speak as you go. If its ears aren’t moving, the horse is not awake. Wait until its ears are moving.
➞ If a horse flattens back its ears, it’s seriously pissed off, usually because you’re doing something wrong. Stop doing that thing. —B.H.