Can Scent-Elimination Sprays Beat the Nose of a Drug Sniffing Dog?

Photograph by Lance Krueger For more and more of us, spraying down has become part of the deer hunting ritual.... 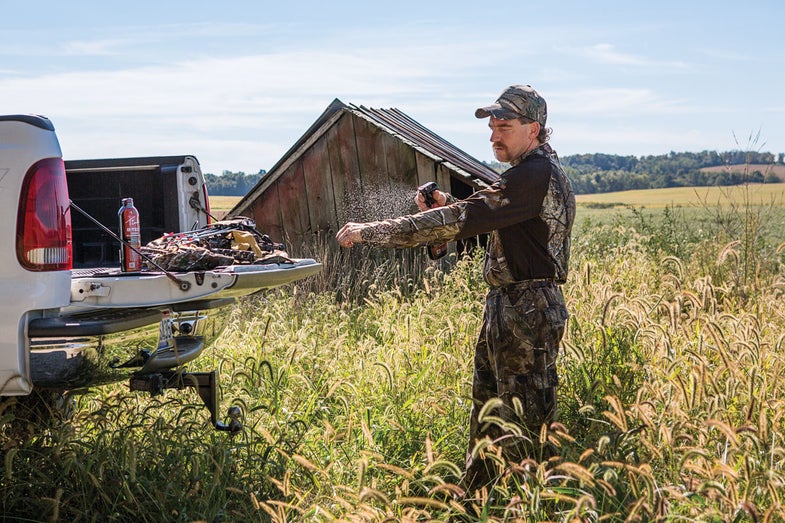 For more and more of us, spraying down has become part of the deer hunting ritual. We slip on our camo and immediately mist it in a no-scent fog. We slide into rubber boots and shower the soles before taking a step. We hang a bow, a pack, or a trail cam and—you got it—douse it with deodorizing spray. The question is, does all this spritzing actually help you beat a buck’s nose?

This is our sixth scent test—and it has actually been a few years in the making. Back in 2012, with the help of Houston County, Minn., sheriff’s deputy Tracie Erickson and his German shepherd K-9, Chance, we proved that no-scent soaps and carbon suits have zero effect on how long it takes a drug-sniffing dog to find a hidden hunter. During that session, we also tested several scent-control sprays.

In a field dotted with six identical, evenly spaced plywood boxes, Chance had to find the one box containing a hunter. (To make sure the dog couldn’t follow a residual scent trail, prior to each trial, members of the test team got into all of the boxes, “heated” them up with human scent, and then all but one tester vacated.)

The Results: In the first trial, the hunter who remained in the box did not spray down—and Chance found him in 20 seconds. In the next three, I doused the hunter in one brand of spray after another. Each time, Chance was barking outside his box in 18 seconds or less, averaging 15 seconds.

The Analysis: Scent-eliminating sprays were clearly ineffective at hiding a sitting hunter’s scent from Chance’s nose, which—​it’s worth pointing out again—has about 100 million fewer scent receptors than that of a whitetail.

Still, we felt the spray test was incomplete. Many hunters use these products primarily to hide residual scent left while walking to a stand—not to block scent while sitting. So this spring, we rebooked Chance. K-9 cops are trained to find bad guys by following their tracks, so we decided to see if scent-eliminating sprays could confuse Chance’s keen nose as he unraveled a scent trail.

We conducted this trial on a baseball field. For each test, Erickson kept the dog hidden while my dad or I entered the outfield from the warning track on the third-base side, stopped, and mentally marked the spot. Then my dad or I paced off 50 yards downwind toward the infield and dropped a rubber ball (Chance’s reward toy), covering it with grass. The dog would need to follow the scent all the way to the ball.

Erickson then walked Chance into the outfield on a long lead from the opposite side so the dog could crosscut the trail. With a stopwatch, I timed how long it took for Chance to first find the trail—once he’d hit or passed the starting mark—and then to follow it and pick up the ball.

The Results: The first tester did not spray his rubber boots or camo clothes. When Erickson brought Chance into the outfield, the dog locked onto the trail instantly and found the ball in 12 seconds. We ran the test three more times, each identically to the last except for the liberal use of a different brand of spray. In every case, Chance found the trail with zero hesitation. In the second test, it took him 13 seconds to lock on and find the ball. In the third, it took 17.4 seconds. In the fourth, 14.2.

The Analysis: Strictly speaking, the spray in the third test did best. So it may be worth mentioning that it was Dead Down Wind’s Evolve 3D+. But five seconds isn’t much, and Chance initially locked onto this trail just as quickly as the others. Had you been there, you too would have recognized a dog that is bored by a too-easy challenge—and therefore lollygagging.

In the end, I think the best you can say about our top-performing spray is that it might have left a trail marginally less pungent than the others, but still plenty pungent enough for the dog to find and follow it with ease. In other words, if a buck crosses your path before your scent has had time to dissipate naturally, he’s going to get you, whether you spray down or not.