Float Through Hell for Moose

# My dream hunt goes like this: A bush pilot drops a friend and me on a river in Alaska.... 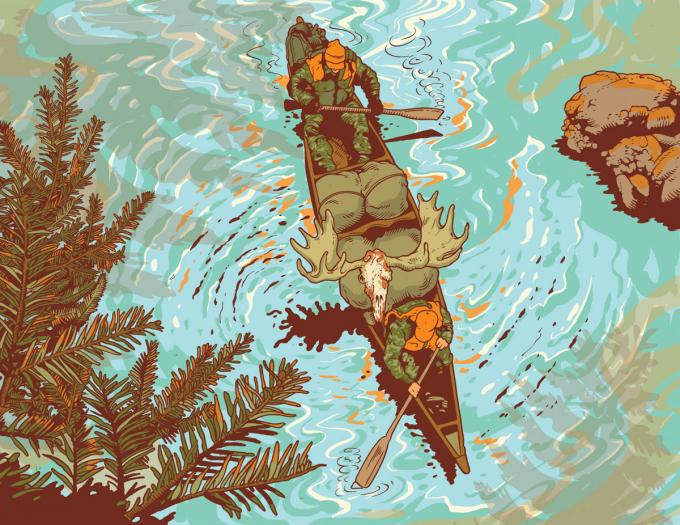 My dream hunt goes like this: A bush pilot drops a friend and me on a river in Alaska. Two weeks later he comes back—his plane empty enough to tote a load of moose meat and antlers out—then returns to ferry a pair of exhausted, but satisfied, hunters back to the real world.

I enjoyed the slightly more civilized version of this hunt with my father when we drew a once-in-a-lifetime Minnesota moose permit in the Boundary Waters, a million-plus acres of boreal-taiga forest peppered with lakes and rivers that hasn’t changed much since the Ojibwa paddled birchbark canoes there. The rules preserve the experience: There are no motors allowed, so you load your gear in your canoe and start paddling. Our first camp was 7 miles deep, and we paddled across six lakes and made five portages to reach it.

A week passed without any hunting action, but finally on the eighth day we paddled up on a cow moose and her calf drinking at the lakeshore. Our tag was good for any moose, but the deep grunts of a bull tucked in the timber told us to pass on mere meat and try for a trophy. We beached the canoe and sneaked toward the grunting until we saw a brown-black slab—as broad as a log cabin. Dad glassed for a few seconds before turning back to me and whispering: “I don’t see horns.” Dropping my own binocs, I said, as calmly as possible, “You’re not looking wide enough.” The bull’s rack would have held my dining-room table, and his dull stare told us he cared nothing for us unless we meant to run off his cow. We crept within 30 yards before kneeling by a thick hemlock. I signaled to Dad to take the shot, and he did what anyone could do in the presence of such a monstrous trophy: He sailed a hastily aimed shot high, clipping hair off the bull’s hump. The bull continued to stare after the shot, but the cow panicked and ran, taking our giant with her. The woods, which only seconds ago contained a moose as large as a mountain, shrank to two men standing awestruck under a hemlock.

I’ve forgotten so much about too many hunts, but that one is burned into my brain as if it were hardwired. Now you can see why I can’t wait to hunt moose again.

Must-Have Gear
Duluth Pack has been making the roomy packs required by canoers for 133 years. The No. 3 Cruiser Combo ($305; ­duluth​pack.com) can be crammed with a ton of gear, yet molds nicely to the rounded sides of a canoe. —S.B.