A beginner's guide to hunting baldpates and robbers—a.k.a, the American wigeon 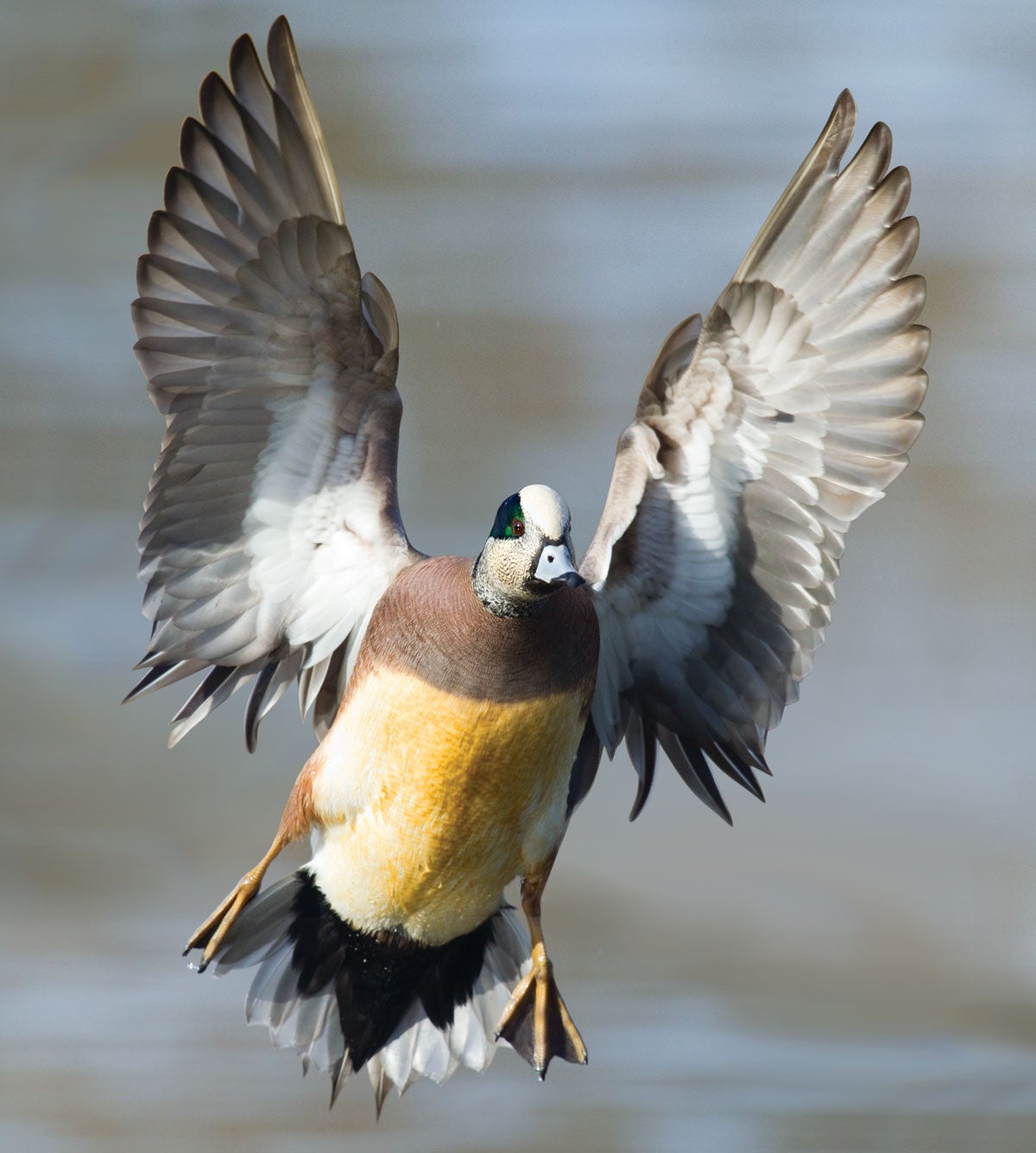 Nicknamed baldpate for the creamy white patch atop the drake’s head, the American wigeon is a medium-size duck, similar in scale to a wood duck, and weighs slightly less than 2 pounds on average. The drake sports a salt-and-pepper head and neck, an iridescent green eye patch extending to the back of the head, a pale blue bill edged in black, and a white belly. In flight, the drake’s trademark white shoulder patch provides identification assistance. The hen, as with most species, is drab brown overall. Although present in all four flyways, wigeon are most commonly encountered in the Pacific and Central corridors, as well as in the southern U.S.

Interestingly, wigeon are also often called robbers due to their habit of stealing scraps of aquatic vegetation brought to the surface by diving ducks, such as redheads and canvasbacks, feeding in deep water. Here are some basic tips on how to hunt wigeon.

How to Set a Decoy Spread for Wigeon

Wigeon aren’t particularly selective of the species with which they’ll spend time, so a mixed spread of dabblers—mallards, pintails, shovelers, and teal, along with wigeon—often works just fine. All-wigeon spreads aren’t out of the question. Some gunners prefer a mix of wigeon and pintails due to the high-visibility white on those particular blocks. If you can find them, flooded pastures or other green-grass fields can be a hotspot for these avian grazers. Tidal marshes are also productive. Wigeon, like pintails, seem to gravitate toward larger, more open bodies of water. Spreads numbering from four dozen to six dozen in these waters grab the attention of passing wigeon groups.

How to Call for Wigeon

Traditional mallard quacks can turn a baldpate or two, but it’s the wigeon’s breathy, rising-and-falling who-WHEET-whooo that proves the auditory ticket more often than not. Some duck hunters can mimic the sound using just their natural voice. For others, an inexpensive wigeon whistle like Haydel’s MP-90 offers ease of use as well as often-needed volume for use on open water. Wigeon are vocal birds, especially on the water, and multiple callers are more effective than a soloist.

With its white crown, a drake wigeon makes the shotgunner’s task easy—or easier—by providing an excellent focal point when you are determining lead. Keep your head down, eyes on the white, brush out the bird with the muzzle, and follow through. Hunters in areas with pintail-limit restrictions should take extra care, as the hens of the two species can look awfully similar, especially in low-light conditions. Look for the pintail’s longer neck and thin swept wings, both of which are visible even in silhouette.

The Right Shotgun and Load for Wigeon

Wigeon are typically taken as part of a mixed bag, rather than specifically targeted, thus falling to everything from light 20s to big-bore 10-gauge autoloaders. Heavy loads aren’t necessary. An ounce to 1 1⁄4 ounces of No. 4 steel should be more than enough when the birds work as they should.